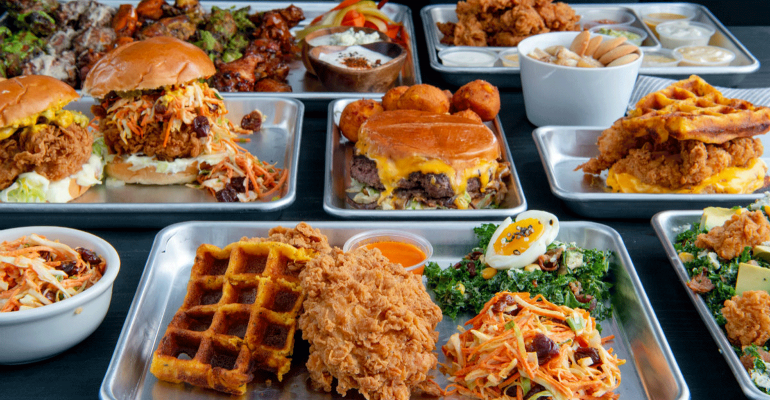 Part marketing strategy, part delivery solution, Alt/Grub/Faction, which launched in December, lets consumers order food from any of Greenspan’s four delivery-only concepts at the same time through the Caviar app and place them all in one order.

Orders are received at a CloudKitchens facility, one of a number of growing commissary outlets designed for delivery-only concepts, where the food is prepared and picked up by delivery drivers.

The four delivery-only concepts include Bubu’s, a fried chicken and burgers joint; Brekkie, an all-day breakfast burrito, bowls, and French toast restaurant; Chino Latino, a Latino-Asian fusion eatery famous for its orange-chicken burrito; and 2 On a Roll, a breakfast and deli sandwich spot.

The concepts opened individually for delivery on a rolling basis. Chino launched in February 2018, followed by 2 on a Roll in April, Brekkie in May, Bubu’s in October. The virtual food court came to life in December.

Customers can order from the individual menus through a variety of third-party apps to get their food delivered, including Grubhub and UberEats. But Caviar holds the exclusive rights to the digital food court, or the ability to order from more than one menu at once.

“All of these concepts were already coming from the same kitchen and prepared by the same team,” said Greenspan, formerly of the now-closed The Foundry on Melrose in Los Angeles. “We realized, ‘Wait a minute, we can re-market this as one large concept featuring all of these items.’ These brands had already been curating their own identities, so instead of combining menus, we launched it as a virtual food court.” 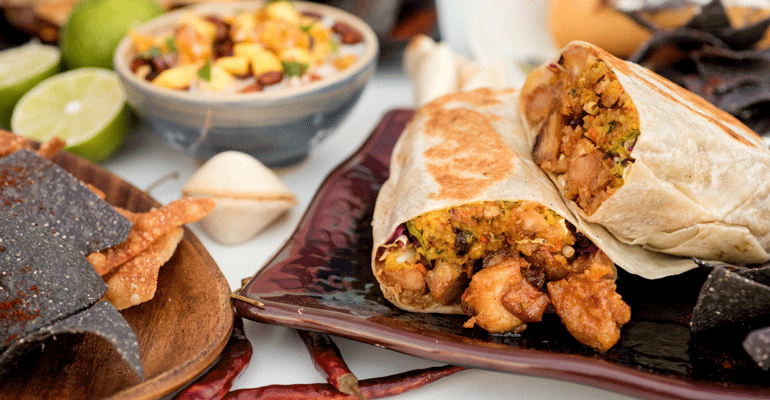 The fare from Chino Latino

As Greenspan explained, if one customer wants a late-night breakfast burrito but their roommate is craving a fried chicken sandwich, both people can order what they want in a single delivery without sacrificing convenience.

“It’s like if The Cheesecake Factory made each of the 17 pages of their menu into individual restaurants,” Greenspan said.

But he said even though his entire staff is essentially cooking for four different brands, there is never much confusion in the centralized kitchen. It likely helps that the menus have overlapping items and ingredients. For example, most of the brands have at least one form of a burrito and breakfast food is a common thread.

Greenspan said getting his business off the ground quickly was part of a plan to experiment with profitability.

“When I started out in the restaurant industry, delivery was around 10 percent of your sales and now it hovers around 30 percent,” Greenspan said. “But if you’re only doing 30 percent of what you’d normally do in a restaurant, you’re in trouble. So I started layering concepts on top of concepts, cross-utilizing products, and recognizing gaps in the industry.”

For example, 2 On a Roll and Brekkie came about after he saw a gap in breakfast delivery concepts.

And Greenspan has continued to tinker with the menu. He has introduced Alt/Grub/Faction-exclusive menu items that can only be ordered through that platform, like a chopped cheese sandwich from 2 On a Roll (seasoned chopped meat with American cheese, iceberg lettuce, red onion, hot sauce and mayo on a roll), and a French toast sandwich with fried egg, cheddar cheese, and maple mayo from Brekkie. 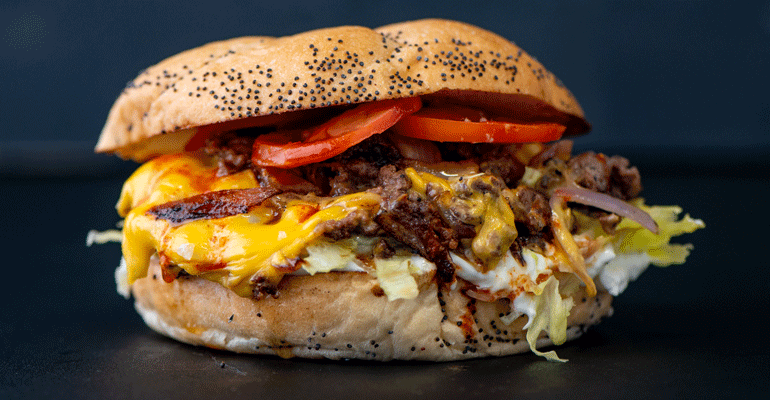 2 On a Roll's chopped cheese sandwich

As a chef with four restaurants, Greenspan said it’s beneficial to work from a centralized kitchen to experiment with new flavors and invent new menu items.

“It’s almost like playing a real-life game of ‘Chopped,’” he said.

Greenspan also said over the past month, their average check has increased from $15 to more than $20 as people are placing orders with multiple food items instead of just one.

“It’s definitely going to help sales without increasing my labor costs and that’s the key,” Greenspan said. “It’s going to give people the opportunity to get food delivered when they may have otherwise made the decision not to order because of lack of choice.”

The downside is that his customer base is a lot smaller because they can only deliver within a five-mile radius. Greenspan said they’re actively looking to grow and will open more commissary kitchens in the Los Angeles area to expand their reach.

In the nearer future, he wants to introduce more brands to the Alt/Grub/Faction portfolio and add customizable options for build-your-own menu items.

“I wouldn’t be doing this if I didn’t think it would work. If it works, I’ll tell the world about it,” he said. “We’re even better than a real food court because you don’t have to wait on long lines.”