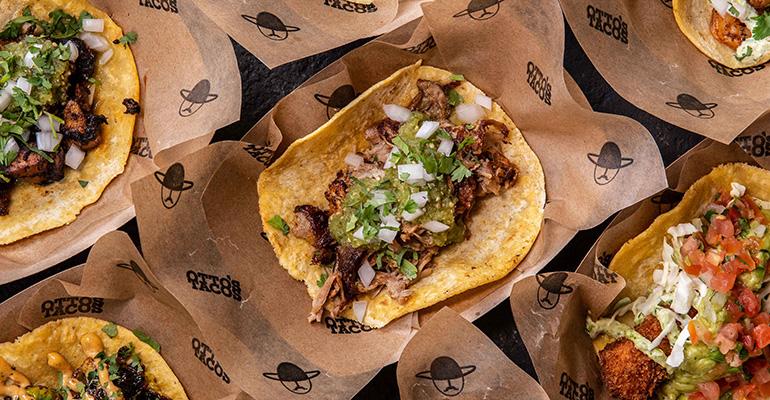 After closing due to COVID-19-era hardship, Otto’s Tacos is now selling a delivery-only menu out of Mighty Quinn’s kitchen

With pandemic-era hardships affecting nearly every corner of the restaurant industry, two New York City restaurants and neighbors — Mighty Quinn’s Barbeque and East Village-based Otto’s Tacos — decided to tackle the challenge together by delivering Otto Cedeno’s fast-casual tacos out of a Mighty Quinn’s location on the Upper East Side, starting at the end of November.

In December, after nine months of trying to navigate the challenges of COVID-19, Otto Cedeno made the difficult to decision to close the last of Otto’s Tacos’ three physical locations after his catering-heavy business dwindled during the pandemic.

“We saw our revenue stream go from a vibrant to number to basically nothing,” Cedeno told Restaurant Hospitality.

Mighty Quinn’s, with six locations in New York City and New Jersey, saw their fair share of hardship in 2020 as well, operating constantly on a level of “barebones uncertainty,” especially as New York City shut down indoor dining again in December.

“One thing that we saw was that with the sales declines from the pandemic, there was capacity in the kitchen to do more,” Mighty Quinn’s CEO Micha Magid said. “Otto and I have known each other for seven years so we began talking about how to utilize our labor and kitchen capacity by doing Otto’s on a delivery-only basis.”

At the end of November, just as Cedeno was getting ready to completely close his last physical location, Otto’s relaunched as a delivery brand in partnership with Mighty Quinn’s. Taking cues from the recent surge in ghost kitchens across the industry, Otto’s Tacos now offers a pared-down version of its original menu — including street tacos, bowls, and jaritos  – available via Caviar, Grubhub Uber Eats, and DoorDash. When customers order via these delivery apps, they’ll only see an address on the Upper East Side, but on Otto’s Tacos’ website, they fully disclose their partnership with Mighty Quinn’s.

“We wanted to give it to [our fans] straight,” Cedeno said, adding that “there’s nothing to be ashamed about” given the current state of the restaurant industry.

Right now, Mighty Quinn’s employees are preparing the simplified menu out of their commissary in New Jersey and then dispatching them from the Upper East Side. Although Cedeno tried to get his employees to return, many of them had either moved on or did not feel safe returning during the pandemic.

Magid declined to disclose the financial details of their new relationship, but said that he was able to help out his neighbor without investing too much capital into the new partnership.

“We thought of this as a way to bring the brand back to the community with no real capital investment,” Magid said. “We’re all very conscious of minimizing losses and this was a way to accomplish that without a huge dollar investment on our part.”

Cedeno said that he hopes their partnership goes on for as long as possible, and that there’s no exact timeframe on when or if Otto’s Tacos will reopen on their own.

“On the one hand, it's very sad seeing your brick and mortars closed,” Cedeno said. “But on the other hand, we’re insanely grateful for them. Having mighty Quinn’s execute our food at a high level, it’s like I can sleep easy at night knowing these tacos are being made the best they can be.”