Return of the Corporate Card: Restaurants enjoy the boost

Editor&rsquo;s note: This is the first in a three-part series by Restaurant Hospitality examining the state of business dining in the U.S. &bull; See more Consumer Trends

After the economic recession curbed corporate spending, taking a major bite out of restaurant revenues, all signs point to a steady return of suits and ties. Business customers should be returning to their seats and restaurateurs should welcome them back with open arms.

A number of data trackers are able to illustrate the upward trend in corporate spending. Overall restaurant spending by clients of Dinova, which helps restaurants build relationships with corporations, grew 7.1 percent year-over-year in the third quarter, the company says. Meanwhile, the total average check paid by Dinova clients increased 6.5 percent year-over-year, from $51.36 in last year’s third quarter to $54.74 this year.

Concur, well, concurs. The corporate expense platform recently released an analysis showing business dining is helping fuel a rise in restaurant revenue. While overall dining sales in the U.S. grew approximately 1.4 percent from Q1 2013 to Q1 2014, the concur study shows frequent business diners increased their dining spend by 6 percent within the same period. Since 2011, the company says, business dining has averaged a 5-percent increase year over year, growing at a much faster rate than leisure dining.

Other data show similar results: TDn2K’s Black Box Intelligence and People Report shows same-store sales grew 1.6 percent during the third quarter and the U.S. Commerce Department reported that sales in bars and restaurants were up 0.9 percent in October, the biggest increase since May.

Dinova founder and CEO Vic Macchio says it’s clear that corporate dining has played a prominent role in getting many restaurants out of the red.

“Companies are continuing to put travelers on the road to achieve their business objectives,” he says. “Road warriors have to eat, and restaurants are benefitting from the positive business climate we see as the year comes to a close.”

Big data can give us a general idea of how revenues are trending, but the street corner restaurant business can sometimes tell another story. Fortunately, in the case of corporate dining, independent restaurateurs are noting the same boosts in business.

At Grace restaurant in Forth Worth, TX, business dining accounts for an estimated 50-75 percent of weekly revenue and 15-20 percent on the weekends. Owner Adam Jones says the American steakhouse opened amidst the economic crisis and therefore local diners were the main clientele. However, lately, business-dining revenue is seeing steady growth, which is in part due to Grace’s four separate private rooms for business dinners and meetings.

“The strength of strong local businesses entertaining guests in our market is advantageous for us as well,” Jones says.

Business dining is a key contributor to increasing restaurant revenue at Culina, a modern Italian restaurant at the Four Seasons in Beverly Hills. Frequent business diners increased their spending by 7 percent within the same period at the hotel’s dining outlets, says food and beverage director Amir Vahdani.

“We have definitely seen a faster growth in business dining than leisure dining in recent years,” he says. “We can effectively target business diners and improve more consistent flow of patrons throughout the week.”

Sepia in Chicago sees a substantial increase in covers when conventions are in town. Business dining represents more than 60 percent of Sepia's total revenues—about 75 percent at lunch and 50 percent at dinner. 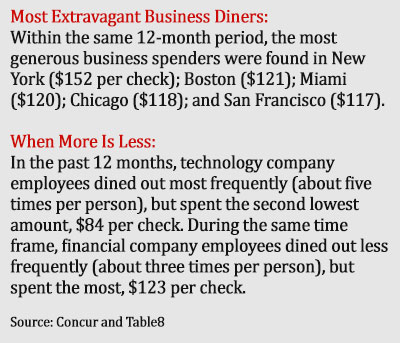 Owner Emmanuel Nony says private dining and lunch service has received a nice boost from the restaurant’s corporate partners. He says dinner covers remain flat, but check averages have increased by 30 percent over the past three years “due to an increase in tasting menus and more upscale wines.”

The trend upward is expected to continue into the holiday season. Dinova, for one, predicts corporate dining spend in December could increase by more than 10 percent over last year. Last December, Dinova’s corporate client spending increased nearly 9 percent over 2012 levels, with a 4.5-percent increase in transaction volume.

“From our Expense IQ Report of last year, dining ranked as the third largest spend category for companies in the U.S., trailing only airfare and lodging,” he says. “With business travel predicted to rise in 2015, we expect to see overall corporate expenditure—especially for business dining—go up as well.”

Stay tuned: Part two of the Return of the Corporate Card series will examine what business diners value in a restaurant.