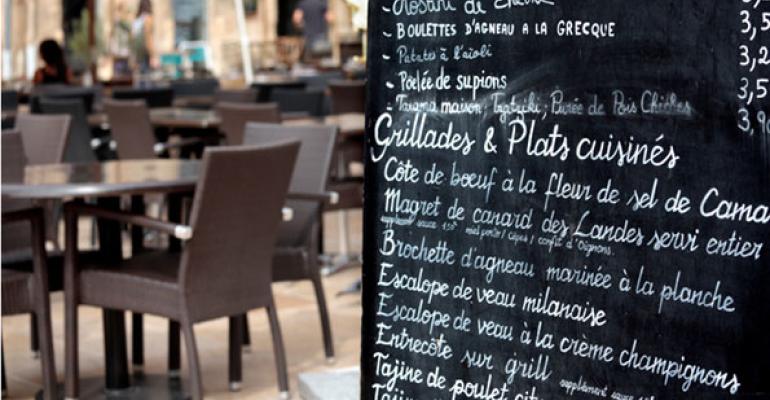 NRA: Americans broadening their horizons on the plate

The NRA’s Global Palates: Ethnic Cuisines and Flavors in America study found, to no one’s surprise, that Italian, Mexican and Chinese cuisines reign supreme in terms of familiarity, trial and frequency of eating. Ethiopian, Brazilian/Argentinian and Korean cuisines? Not so much.

But Americans are wandering outside their comfort zones, probably in no small part a reflection of Millennials, who are known for their more adventurous dining appetites.

“Americans generally are more willing to try new food than they were only a decade or so ago—especially in restaurants—underscoring that the typical consumer today is becoming more adventurous and sophisticated when it comes to different cuisines and flavors,” says Annika Stensson, NRA's director of research communications.

Stensson pointed out that ethnic cuisines are a long-term trend on restaurant menus, to the point that people forget some foods aren’t necessarily “American.” But the research suggests that consumers are exploring new horizons for novel flavors.

Two-thirds of consumers in the survey say they’re eating a wider variety of ethnic cuisines now than they were just five years ago.  Restaurants are the primary point of access for trying new cuisines, as well as the source where frequent eaters typically get their ethnic food, the research found.

Among other key takeaways from the survey:

• American consumers place value on authentic experiences and restaurants specializing in individual cuisines, but are nearly equally as open to ethnic dishes on mainstream menus.

• 80 percent of consumers eat at least one ethnic cuisine per month.

• 17 percent of consumers eat seven or more cuisines on a monthly basis.

• Nearly one-third of consumers tried a new ethnic cuisine in the past year.

• On the restaurant takeout and delivery side, Chinese is by far the most common ethnic choice, followed by Ethiopian, Mexican and Italian.

The survey of 1,011 adults, conducted in April 2015 by ORC International on behalf of the association, asked how familiar Americans are with various ethnic and regional cuisines and items, where they typically eat them and how they feel about those choices.