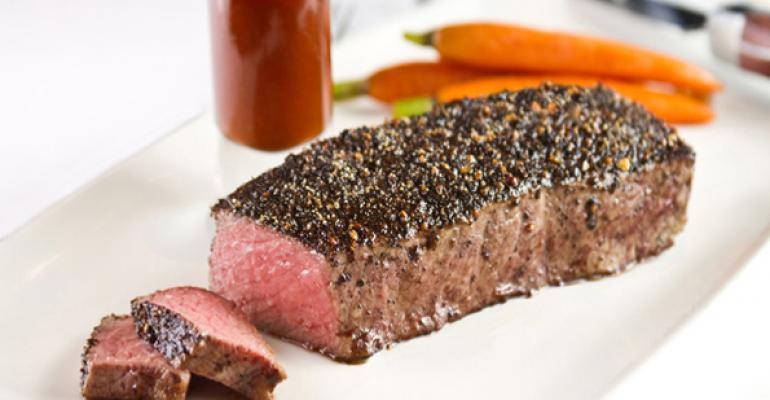 Consumers’ mouths water when they read about adventurous entrees in food magazines. And they can’t get enough of watching celebrity chefs make them on TV. But will they order something similar when it’s offered to them at a full-service casual dining restaurant? Probably not, even if they know it’s also a healthy choice. Instead, they’ll play it safe and order a steak.

Those are the findings of a recent survey conducted by food industry think tank Culinary Visions Panel. For its study, Chicago-based Culinary Visions asked more than 200 consumers to, first, rate the perceived healthfulness of four “invisibly healthy” entrees, then rate how likely they would be to order these items in a casual dining restaurant. Protein choices ranged from the familiar (steak) to slightly outside the mainstream (rabbit).

The other test entrees and their descriptions were:

• Seafood & Bean Stew—Clams, calamari and chorizo served in a rich thyme-infused broth of cannellini beans and kale” (19 percent of respondents said they would order it);

• Braised Baby Lamb Shank with Olives, Figs and Fennel—Grass-fed baby lamb shanks brained with orange, wine and tomato, finished with kalamata olives and black mission figs, served with braised fennel and a minted faro salad on the side” (20 percent would order); and

• Rabbit Ragu with Polenta & Rapini—Slow-braised rabbit served over soft polenta with a side of rapini and lemon (19 percent would order).

“When they are dining out in casual restaurants, American adults like steak,” says Sharon Olson, executive director of Culinary Visions Panel. “We saw the likelihood of ordering the steak entrée significantly higher than the other menu concepts and women were more likely to order it than the men.”

Whoa. Mix the Culinary Visions Panel information in with dire forecasts about beef prices because of rising grain and corn prices and what’s a menu planner to do? These results are telling operators that cool, contemporary, healthful and delicious new protein-based entrees won’t have nearly the impact on your menu that a simple steak will.

Keep this in mind when you strategize the next round of menu changes at your restaurant. Keep an eye on beef prices and value cuts you might use while you plan, because the beef market can change fast.