Flavor of the Week: Achaar — a vibrant South Asian condiment 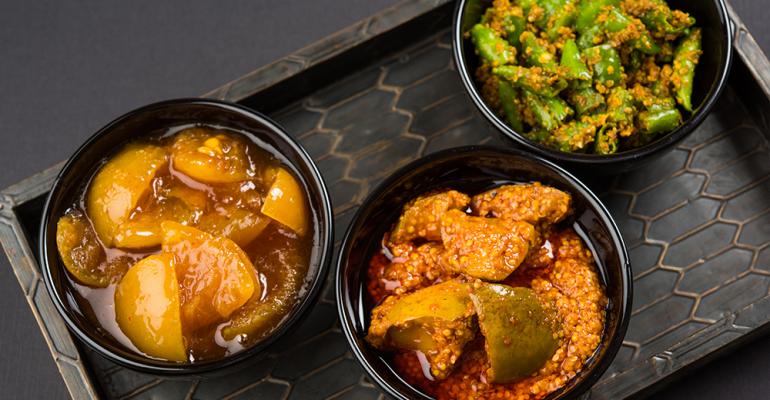 Achaar is a whole category of condiments from the Indian subcontinent. Made with heavily spiced pickled vegetables or savory fruits, such as green mango, they have traditionally been a way to add inexpensive punch to meals comprised mostly of rice or other starches.

In southern India, achaar is often made with sesame oil and is very spicy, while to the north, mustard oil is used for its vibrant coloring and flavor.

Achaar has spread beyond its South Asian homeland to places with large Indian populations, such as Malaysia, where it has long been part of the cuisines of the Chinese and Malay communities there. That’s probably how it ended up on the menu of a Chinese restaurant in Texas, as you’ll see in this week’s Menu Inspiration.

With the ongoing rise in global influences on menus in the United States, you can expect to see achaar make more appearances in restaurants, where guests can use them to add as much or as little zing to their food as they like. Like many other condiments, it’s a low-cost, low-labor, high-impact way to give customers what they want.

Market research firm Datassential reports that achaar appears on 50% more menus now than it did four years ago. However, it is still found on fewer than 1% of menus, indicating that operators who use it have a chance to stand out from their competitors.

Click through the gallery to learn more about this Flavor of the Week and see how one restaurant is using Achaar on its menu.