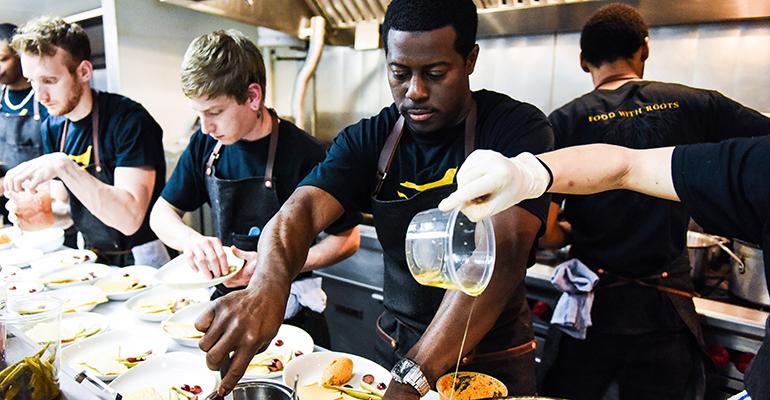 Celebrated Seattle chef Edouardo Jordan said he plans to “take a step back for a bit."
People>Chefs

Celebrated Seattle chef Edouardo Jordan said he plans to “take a step back for a bit” after a Seattle Times report over the weekend detailed accounts of about 15 employees who accused him of sexual misconduct or unwanted touching.

In the Seattle Times report, the women’s accounts go back several years and included situations in which the staff members were groped at work, and one woman said Jordan subjected her to an unwanted kiss outside work. Other women said Jordan made inappropriate comments about their breasts or frequently touched them in unwanted ways, like hugging them from behind at work.

On Sunday, reports said most of the staff at Jordan’s restaurants Salare and JuneBaby quit after the Seattle Times story was published.

Jordan had announced last week — before the article came out — that he was planning to close Salare on July 3 as a result of the pandemic. He also planned to merge JuneBaby with sister restaurant Lucinda Grain Bar.

JuneBaby, a restaurant hailed when it first opened in 2018, was scheduled to reopen for dine-in service on Wednesday, and Jordan has been promoting Father’s Day specials.

In a statement on his social-media accounts, Jordan denied many of the reported allegations, but he defended the right of women to be heard and said he holds himself accountable.

“I’m deeply sorry if my conduct ever offended anyone or made anyone feel uncomfortable. I have had moments where I have made decisions that have negatively impacted people I’ve worked with — and it was never my intention to be part of or condone a workplace culture that made co-workers or employees feel ‘less than,’” he wrote.

In the statement, Jordan said the restaurants had sexual harassment prevention protocols in place and “third-party HR representation” since 2019 to field concerns and complaints.

“Where do I go from here? I step back for a bit,” he continued. “I don’t make excuses. I listen and learn. I continue to ensure that my workspaces are safe and equitable environments for all employees and free of toxic behavior. I elevate the talents of the incredible team that currently works with me. They are the true stars who make the restaurants I started come alive.

“I must hold myself to the highest standard and hold other chefs to that standard as well,” Jordan wrote. “I will continue to work hard and fight for the diverse voices in the restaurant and hospitality industry and continue to grow as a business owner, a father, a partner and a chef.”

An alum of The French Laundry has joined forces with Carl Sobocinski at multiconcept group Table 301
Jul 29, 2021

Jennifer Jasinski to be inducted into MenuMasters Hall of Fame
Jul 21, 2021