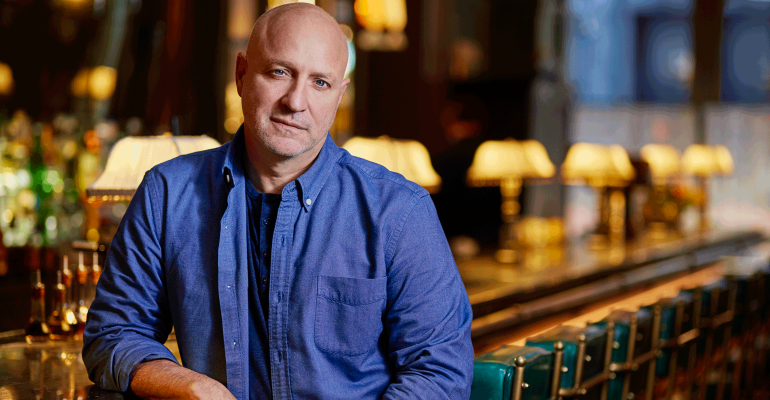 An open letter to (male) chefs

Tom Colicchio on sexual harassment in the industry: “Enough.”

A familiar face on television, Colicchio is also owner of the New York-based Crafted Hospitality restaurant group, which operates the signature concept Craft, as well as the recently opened Temple Court, Riverpark and Heritage Steak. Separately, he also operates the sandwich chain ‘Wichcraft.

As a chef, Colicchio has spent time in some of New York’s top kitchens, including Gramercy Tavern.

The recent ‘revelations’ of rampant harassment in the restaurant industry weren’t exactly a shocker to the women working in it. Or the men, for that matter.

This isn’t just a matter of a few bad eggs and ​we all know it.

For every John Besh splashed across Page Six, we can assume hundreds, if not thousands more, with kitchens just like the ones his female employees described. Something’s broken here. It’s time that chefs and restaurant owners candidly acknowledge the larger culture that hatched all these crummy eggs, and have some hard conversations amongst ourselves that are long overdue.

Let’s start with this: Assessing a woman as a body, rather than as a person with a mind, character, and talent, denies the full measure of her humanity. It’s wrong and it demeans us all.

Real men don’t need to be told this.

They shouldn’t need to be told that the high stakes of elite kitchens don’t justify the ugly machismo that runs through so many of them.

There was a stretch in the late ’90s at Gramercy Tavern when all the senior chefs in my kitchen were women. Night after brutal night, we faced the same pressured ballet of high heat, eighty sixed salmon and tickets spitting out of the printer at a clip too fast to meet. The only difference was the quiet; the smack talk was gone. These chefs were tightly focused, competing against themselves, not each other.

I recall a group of French chefs were visiting at the time who had a good sneer over the male-to-female ratio in the kitchen. I also recall they shut up pretty quickly once they saw the food.

My kitchen is hardly perfect. I’ve let my temper run high and driven the pressure up. I’ve brushed off the leering, without acknowledging its underlying hostility. I once called a journalist a “rumor-mongering b — -h” for printing gossip that hurt my staff, a gendered slur that I regret.

But I count myself lucky: I had a father who wouldn’t allow disrespect of my mother, and that lesson sunk in more fully during my formative years than the casual misogyny I saw everywhere else.

It made it an easy choice to turn away the high-paying bachelor parties that wanted to rent out the PDR and bring in a stripper, which isn’t an environment my servers signed on for.

It made it a no-brainer to fire the creep of a staffer who snapped pictures of his female co-workers in their changing room without their consent.

And it makes it easy for me to see that it’s time for men in the restaurant industry to say to each other: Enough.

Enough; because deep down men know that sexist shit-talk is just a lazy substitute for real wit.

They know that work is not sexy time.

They know that if they have to insist it was consensual, it probably wasn’t.

They know that women really don’t want to hear about their boners (and that they shouldn’t say boner because they’re not 15.)

I imagine leaders in our industry will now come rushing forward with talk about how women should feel safe and valued in our restaurants. But is it any wonder that dick culture persists in professional kitchens when most of the women are gone from the back of the house by the time they hit their 30s? When the ones who remain are paid, on average, 28 percent less than their male counterparts?

Men vastly outnumber women as chefs in top kitchens, but not, as legend has it, because only ‘real men’ can stand the heat.

We need to do more than pay lip service to fixing this. It’s not enough for us to ask, “How can we behave differently around our women employees and coworkers?”

Instead we should be asking “What barriers to their success do I owe it to them to remove?”

Those of us with our own kitchens should be asking “What have I been able to take for granted on my way to the top that women often can’t, and how can I help fix that?”

It’s time we reimagine the family-averse work week that tells young cooks being a “real” chef is incompatible with being a parent. That tradeoff is a Faustian bargain, and its own form of harassment.

And while we’re at it, let’s scrap those beloved myths about brawn, blood, and blind sacrifice that chefs and their acolytes use to justify exploitative work conditions. Sure, we all sweated and scrapped and worked damn hard to get where we are, but most of us did it without the added torment of sexual harassment. Enough.

A generation ago, American chefs were the young upstarts, bucking old-world conventions and forging a new path. We were the ones to watch.

Is this the end of that era? Is this what passing the baton looks like? Or do we have a second act in us, one in which we excite eaters more than ever because we’re empowering a new generation of talent?

Can we finally redefine, in our collective minds’ eye, what the race, gender or sexual identity of a top chef might be, and take the steps to make that happen?

Chefs are a tough bunch; canny, creative and quick on our feet. That’s why I’m betting our industry can shrug off its leering lizard skin and get this right. I’m betting that we’re smart and confident enough to level the playing field and create real opportunity, or at least learn how it’s done from the new crop of women (and men) running their own kickass kitchens humanely and winning awards, while parenting young kids.

I’m betting we can reinvent our industry as a place where people of all genders feel safe and prepare to lead.

Some aging bros may give us flack for it. But only until they see the food.