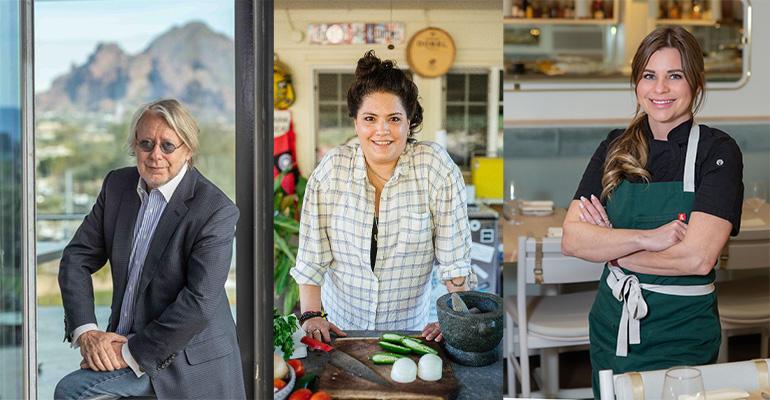 Every year, prior to 2020, the James Beard Awards seasons is kicked off with the announcement of more than 400 semifinalists in a total of more than 20 categories, but not every year do so many restaurants, chefs and bakers from Arizona get represented. The 2022 semifinalists include 14 names from the Grand Canyon State, and that’s the main thing they have in common.

With a Japanese restaurant, a taco spot, an establishment with a high-end tasting menu and an Italian grocer all being recognized, the range of talent showcases the uniqueness of Arizona's dining scene.

“It's always fantastic to be recognized by people in the industry and your peers,” said Christopher Gross, who is a semifinalist for the Outstanding Chef category. “I’m very happy to be recognized for the work we have done over the years, and it’s due to all the great people who worked with me that has made it all possible.”

The next round of finalists, with five or six names per category instead of around 20, will released later in March, and then on June 13 the winners will be announced. The semifinalist list is long, but here are all 14 of the businesses that have made it this far. Even if they don't win, each one is noteworthy.

At Tito & Pep in Midtown, chef John Martinez whips up mesquite-fired cuisine. He scored a place on the semifinalist list in the category of Best Chef Southwest for dishes such as Sea of Cortez shrimp with masa dumplings, steak with roasted chiles and charro beans, and mesquite grilled whole artichoke. The space has a retro diner vibe with a touch of the Southwest. The name pays homage to the stories his grandmother Dorothy would tell his great aunt Marie when they were kids, which were all about the adventures of two little girls named Tito and Pep.

Tacos aren't always the star dish when it comes to fancy award presentations, but chef Maria Mazon of Boca Tacos y Tequila has caught the eye of the judges in the Best Chef Southwest category.

"I’m beyond honored and proud to see that Tucson is among such important recognition," said Mazon over email. Mazon was born in Arizona, but was raised in the Mexican state of Sonora, which influenced the menu that includes tacos, báhn mì quesadillas, salsas and guacamole.

Don Guerra of Barrio Bread creates artisan breads using traditional baking techniques and locally-grown heritage grains such as Khorasan wheat and einkorn. He has been pegged as an Outstanding Baker semifinalist. Guerra started the bakery out of a garage in 2009 and Barrio, which means “neighborhood” in Spanish, has become a neighborhood staple.

Giovanni Scorzo is honored to be in the running for as Best Chef Southwest for his work at Andreoli Italian Grocer. Though born in the southern Italian region of Calabria, Scorzo was raised in the north, in Liguria. He later later trained at top restaurants all over his country. Eventually he came to Arizona where he ran many other restaurants before opening Andreoli, where the chef concentrates on making authentic Italian food. Scorzo named the restaurant after his mother, Adele Andreoli, who was the biggest influence in his cooking career. Everything is made in-house from scratch, and diners will find a menu full of dishes such as pasta e fagioli, fusilli with pork ribs in tomato sauce, grilled branzino, and gnocchi alla corsara.

This isn't the first time ShinBay has made the James Beard semifinalist list, but this time the restaurant by chef Shinji Kurita is up for the national Outstanding Restaurant award, instead of a regional award. The Japanese omakase spot has been serving up tasting menus for more than a decade, adding a modern twist to classic dishes. Dinner is served in two seatings each day for $185 per person.

Head to the historic downtown area to dine at Atria and find out why chef Rochelle Daniel has become a semifinalist in the Emerging Chef category, which was formerly the Rising Star Chef category, although the previous award had an age limit of 30. The seasonal menu focuses on fresh pasta, seafood, steak and locally grown produce. Daniel is a Phoenix native and was a finalist on the Food Network’s “Chopped Grill Masters” in 2017.

The Best New Restaurant award is a coveted national award, and it's one Bacanora just might take home. Chef Rene Andrade opened  his new Sonoran-style Mexican restaurant in February of 2021. Quickly it became a neighborhood favorite, with a wood-fired grill being the only cooking method in the brightly-colored establishment. With Sonoran food, smoke is a key ingredient, and the name Bacanora, which is a Sonoran spirit related to mezcal, tips a hat to that flavor. Here the menu is simple and short, including dishes such as elote, a carne asada burrito, pollo asado and daily specials.

Chef Lori Hashimoto runs this modest and popular Phoenix spot, which has been serving up traditional Japanese food since 2015. She is a semifinalist in the Best Chef Southwest category. Hana is known for its plates of chicken tatsuta-age, maguro teriyaki, sushi, hamachi kama and bento boxes. The restaurant is family-owned by Hashimoto, her partner Lynn Becker, her mother, who went to culinary school in Japan, and her step-father, who was a chef in Japan and is the head chef of the restaurant.

Go to Binkley's and see why this elegant restaurant has made the list for Outstanding Hospitality. One of the top fine-dining destinations in Phoenix, the tasting menu runs $240 per person, with the option to add a $200 wine pairing, a two-ounce portion of wagyu beef for $54, and  anounce of Kaluga caviar for $146. Reservations open up six weeks in advance, and 20-seat Binkley's is open five nights a week for dinner at 6:30 pm.

Christopher's at the Wrigley Mansion

The Outstanding Chef award could go to Christopher Gross, owner of Christopher's at the Wrigley Mansion, which opened in 2021. Gross is no stranger to the James Beard Foundation. He has done events with the organization since the early 1990s. The tasting and à la carte menus served at Christopher's feature American-fusion fare, including dishes he has cooked for years that pull in techniques from across the board. This unique restaurant doesn't have a front or back of house. Instead, the whole team works together to cook, serve, pour wine and offer hospitality to guests.

Delicate maple bourbon pecan tarts, apple huckleberry crostadas and horchata cake can be found at Mark Chacón's Chacónne Patisserie, and those are some of the reasons the chef has been named a semifinalist for Outstanding Pastry Chef. The chef's work has grown out of experience baking for Tartine and Chez Panisse in the San Francisco Bay area and Noma in Copenhagen, Denmark. There are two locations of Chacónne Patisserie, one is pick-up only, and the other is housed inside the Futuro coffee shop.

Donald Hawk, who is a semifinalist for the Emerging Chef award, opened Valentine in 2021, offering breakfast, lunch and dinner. The look of the restaurant is diner-meets-lounge, but the food is more elevated than you might expect and speaks to local ingredients. Think pork ribs with sarsaparilla glaze and chayote slaw, Anasazi bean dip with chile-laced corn chips, and crispy cauliflower with native- seed tahini, stone fruit escabeche and wolfberry harissa. The cocktail program also features local flavors, for example the Cactus Martini made with cactus vermouth, and the Ponderosa Saturn, a gin-and-pine drink.

The Larder + The Delta

Stephen Jones of The Larder + The Delta is a semifinalist for the Outstanding Chef award. The focus of Jones' restaurant is local and seasonal foods, and how to feature a solo ingredient in an array of ways. While Jones is singled out for the award, the team at The Larder + Delta work collectivity, both on cooking and menu development. While the menu changes frequently, it may include dishes such as smoked beef short rib with antebellum grits and pomegranate molasses, and dirty rice croquettes with duck confit, braised oxtail, Carolina gold rice, black eyed peas and collard green potlicker aïoli.

Making the list for Outstanding Restaurateur is Chris Bianco, who owns and operates Tratto, two locations of Pane Bianco, Bar Bianco, and two full-service Pizzeria Bianco spots, all in Phoenix. Bianco launched his first Pizzeria Bianco in 1988, a small operation located the back of a grocery store. Another fun note about the chef, he developed his own fruit with a farmer, the Bianco DiNapoli Tomato, which is used at the restaurants.