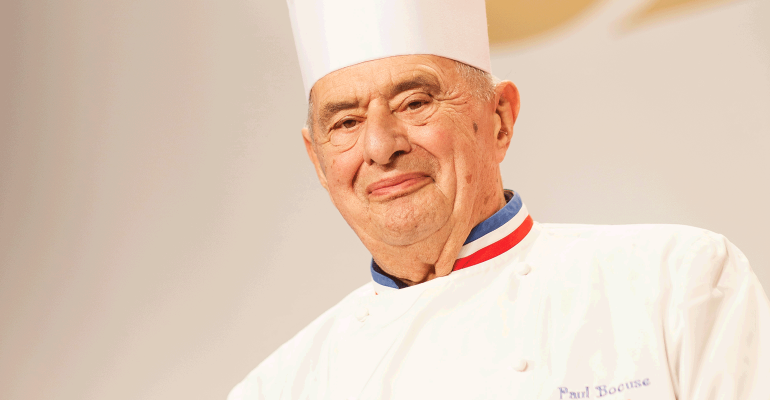 Paul Bocuse, the legendary chef and restaurateur who changed both French cuisine and what it means to be a chef, died Saturday in his home town of Collonges-au-Mont d’Or, near Lyon, France. He was 91.

Born in 1926, Bocuse was the chef of and owner of L’Auberge du Pont de Collonges, a Michelin three-star restaurant, as well as many brasseries, bistros and other restaurants around the globe. He gained fame in the late 1960s and early 1970s as a standard-bearer of Nouvelle Cuisine, a culinary movement that sought to modify the recipes codified early in the 20th century by August Escoffier, allowing chefs, rather than merely reproducing the classic dishes, to put their own marks on them, as artists rather than as craftsmen, arguably paving the way for modern restaurant cuisine.

Bocuse also was an avid self-promoter, naming the biennial Bocuse d’Or culinary competition after himself, traveling the world promoting Champagne and setting an example for modern celebrity chefs. “A craftsman extraordinaire, a significant innovator, a respected leader, an esteemed professional — and having achieved global fame in an era before even fax machines existed — Paul Bocuse stands out in the lineage of great chefs,” said Tim Ryan, president of The Culinary Institute of America, based in Hyde Park, N.Y.

“While others influenced 20th century cuisine, it was his leadership, his vision, and his willingness to take risks that set in motion the century’s global culinary renaissance,” he added, calling Bocuse the Elvis Presley of chefs, inspiring others to aspire to be like him.

Jacques Pépin, another celebrity chef from Lyon, expressed sadness of his passing on Facebook.

“His cuisine was true to the ingredients, unpretentious but sophisticated and personal. He represented the best of our traditions and the best of our modern cuisine. … He was generous, witty and fun to be with and he loved life. He will be greatly missed.”

Restaurant consultant Fred Le Franc of Results Thru Strategy, based in Charlotte, N.C., recalled when he was training at The Pump Room in Chicago in 1976 and Bocuse spent a couple of days at the restaurant to promote Nouvelle Cuisine.

“His technique was so different from what we were serving. Our food seemed heavy while his was a delight to the eye and mouth. He was generous with his ideas as it was clear that he wanted to evangelize this new approach.”

Apart from his exquisite technique and revolutionary approach to cooking, Bocuse was known for his camaraderie and the sense of fraternity he encouraged among chefs, and many chefs posted remembrances on social media of his visits to their restaurants.

“Chef Bocuse changed our live and the lives of millions,” chef and restaurateur Thomas Keller said on Twitter. “He set the example for chefs and restauranteurs. He helped us understand the importance of evolution, teaching, mentoring, sharing and building meaningful relationships.”

Chef Paul Bocuse changed our lives and the lives of millions. He set the example for chefs and restauranteurs. He helped us understand the importance of evolution, teaching, mentoring, sharing, and building meaningful relationships. Join me in celebrating his exemplary life. pic.twitter.com/e38ye2tuUP

Another famous Lyonnais chef, and friend of Bocuse, Daniel Boulud, thanked Bocuse on Instagram “for being the greatest influence in my life since i started cooking at 14.”

New York City-based French pastry chef Florian Bellanger said on Instagram “Chef Bocuse represented the French Culture at its best,” and that he was sure that the chef was now delighting the angels with his cooking.

“The Master,” Chicago chef Carrie Nahabedian, said of him on Facebook, recalling that he visited her restaurant, Naha, twice. “He loved meeting the staff and eating Armenian food.

“The mark Bocuse made on gastronomy is unmatched.”

Rich Rosendale, who represented the United States in the 2013 Bocuse d’Or competition, said on Facebook that Bocuse shaped French cuisine and “was always a kind gentleman.”

“We will miss you Paul Bocuse R.I.P.”