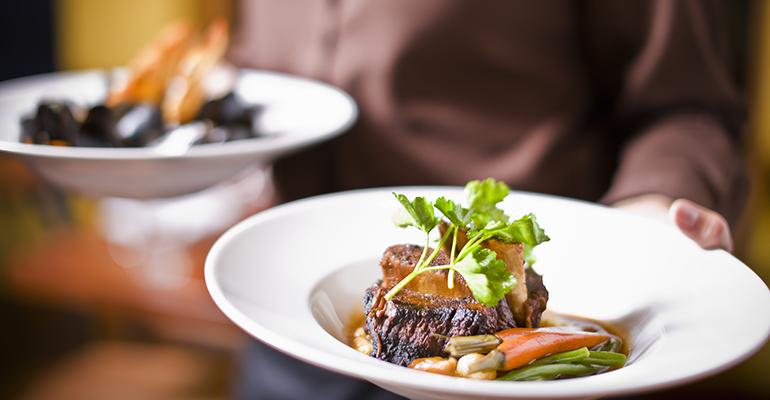 At Culinary Institute of America’s Worlds of Flavor conference, chefs embrace their roots while adapting to the coronavirus pandemic

Restaurateurs searching for a roadmap to navigate a profoundly disrupted global business environment received some helpful directions at the Culinary Institute of America’s 22nd annual Worlds of Flavor conference. Subtitled “World Kitchens, World Tables,” the program, which was all digital this year, brought together chefs from five continents and more than 20 countries to swap survival strategies. The consistent underlying theme was articulated by Rodrigo Oliveira, chef at Mocotó in São Paulo, Brazil, who suggested that in tough times, the best course is to go back to basics and rediscover simplicity.

Soothe the soul. In line with Oliviera’s dictate, many chefs eschewed culinary pyrotechnics in favor of the familiar. Gregory Marchand, chef-owner of Frenchie restaurants in Paris and London, created a classic poireaux vinaigrette, made with marinated leeks (poireaux in French) with herbs, and while he did a bit of modernizing with a dash of smoked cod roe, he finished the dish with what he termed “grandma’s vinaigrette.” Marchand was followed on the program by London-based, Ukraine-born Olia Hercules, who updated her Ukrainian grandmothers’ stuffed cabbage to present her own dish, sour cabbage-leaf rolls with pork and barley, in which she used chestnuts, pearl barley and garlic confit.

Gabrielle Eitienne, food historian and cultural preservationist based in North Carolina, invoked not just her grandmother, but her grandmother’s grandmother as she prepared a magnolia leaf-wrapped braised rabbit saddle in a smoky potlikker. Eitienne’s dish showcased “vibrational” cooking, a Geechee concept that combines skill with memory and a conscious connection to forbears. Melissa Martin, founder of Mosquito Supper Club in New Orleans, also showed her respect for tradition with her blackberry dumplings, a lagniappe, or little treat, that traces its roots to her southwest Louisiana forbears.

Support the community. As with restaurateurs in the United States, chefs on the global stage have done the COVID pivot in their home regions. Gastón Acurio, ambassador of Peruvian cuisine and chef-owner of seminal Astrid & Gastón in Lima, described using his restaurants as food kitchens for both his employees and the city’s poor. Marchand spoke of dispatching 100 meals a day to medical workers and setting up a facility to feed the homeless, and Will Goldfarb, owner of Room4Dessert, formerly in New York but now on the Indonesian island of Bali, is cooking for an orphanage and senior-citizen community threatened with hunger as the moribund tourism trade has dried up government funding. While many of us are debating the future of post-shutdown hospitality, chefs around the world have returned to its classic definition by providing care and feeding for those in need.

On the subject of hospitality and in an intriguing aside, Acurio predicted the end of restaurant excess: Excess in food, wine and ambiance. He foresees next-generation chefs redefining hospitality by means of smaller menus in smaller places that emphasize affordability and fun. He believes that Covid-19 has forced a kind of reset of the chef mindset, and he anticipates a shift from chef-driven to more consumer-focused, consumer-accommodating operations in the post-COVID world.

Continue to innovate. While renowned chefs like Acurio spoke of dining on fried eggs on rice to soothe coronavirus anxieties, other chefs continue to push the gastronomic envelope. Indian-born Garima Arora runs Restaurant Gaa, a modern Indian restaurant in Bangkok, Thailand. The first Indian woman to earn a Michelin star, Arora is a kind of vegetable whisperer, who has perfected and shared a five-step technique to give vegetables the same umami and taste satisfaction as meat.

If Arora is an umami-ist, Andoni Luis Aduriz, noted culinary provocateur at Mugaritz in San Sebastian, Spain, is a texture-ist who believes that texture is ultimately more important than flavor. To support his contention, he posted a screed that described the multiple dimensions of and inspirations for texture; its least incendiary examples include sweat, slime and snot.

Meanwhile in France’s Côte d’Azur region, also known as the French Riviera, Mauro Colagreco has used the closure of his Michelin-starred restaurant Mirazur to explore what he dubs lunar cuisine, which follows the cycle of the moon and incorporates the unexpected use of roots, leaves and flowers. The ingredient list for his complex lamb millefeuille includes red orange, nasturtium and sea lettuce leaves, together with kombu confit, white sesame flax and seaweed mayo.

Look to the future. The conference invariably provides a look at the shape of things to come, and the shape clearly follows the outline of the continent of Africa. A half dozen representatives of its varied national cuisines took the digital stage to demonstrate dishes totally in tune with the times with their combination of consumer appeal and comforting qualities. Chef Michael Elégbèdé’s whole grain millet stir-fry with shrimp and sweet corn would be as appealing in Louisville, Ky., as it is in Lagos, Nigeria, at his restaurant Ìtàn Test Kitchen; while award-winning food blogger and cookbook author Sophia Musoki’s Kabalagala, fried Ugandan pancakes made with sweet, ripe bananas, are tasty first cousins to Melissa Martin’s Blackberry Dumplings.

Finally, the program typically provides an “aha” moment or two, bright ideas for immediate implementation. This year, Ozoz Sokoh, a food writer and cookbook author dedicated to Nigerian/West African cuisine, was one of several cooks who used grains of paradise, a floral spice related to both ginger and cardamom that is used widely in kitchens throughout West and North Africa. It is readily available in the States, too, to give an immediate flavor boost to standard soups, stews and braises.

Video: Adam Rosenblum of Causwells in San Francisco on how to look after staff and customers during the pandemic
Nov 24, 2020