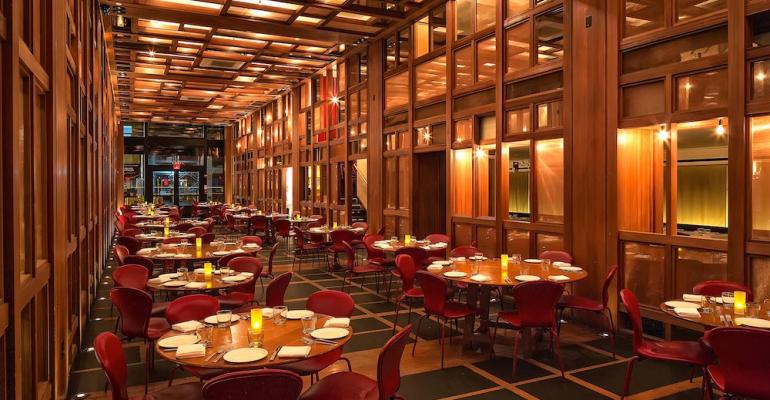 The owner of Lebanese concept Ilili shares secrets to survival

Philippe Massoud, owner and executive chef of New York City’s Ilili, speaks often of the creativity that’s born out of necessity, of the activity that fills up absences.

Ilili is celebrating its 15th anniversary, an unlikely success for a restaurant that opened shortly before the 2008 recession to a spate of bad press, according to Massoud, and which recently weathered the COVID-19 pandemic in one of the U.S.’s hardest-hit cities. But Massoud, who grew up in Beirut during the Lebanese civil war, had experience enduring crises long before he opened Ilili. Much of his life has followed the shape of a metaphor his wartime memories suggested to him:

“Life will bloom, no matter what, because life is strong. Life is powerful,” Massoud said, in reference to a conversation he had with his staff in the early days of the pandemic. “I remember plants and trees growing out of sidewalks and concrete. And I said, ‘We're going to be that green plant that's going to grow out of this despair and this darkness that COVID has brought upon us.’”

“[Ilili] D.C. is a celebration of [Ilili] New York's success,” Massoud said. “Had New York not been so good to us, we wouldn't have had the confidence or the strength to open up in another market. But we knew that the brand had staying power and that New York had really helped put us on a pedestal. And we went to D.C., and D.C. embraced us with open arms. The restaurant is a departure, from a decor perspective, because I'm not trying to do cookie cutters. I'm really doing stories in each city. The menu is different. Our team over there has creative license.”

Where the 10,000-square-foot New York City location’s decor is abstract, consisting in wood-frame walls and ceilings whose pattern and lighting suggest a honeycomb with rectangular cells, the 4,500-square-foot D.C. location evokes a courtyard in the Levant, complete with trees, hanging plants and a central fountain.

The two menus have significant overlap, but Massoud highlighted two dishes unique to the D.C. location: charred octopus with ajo blanco, batata harra and roasted red pepper; and hummus with crab falafel, an homage to the crab cake.

An oasis of peace in a land of insanity

Massoud and his family were in the mountains of Lebanon — hoping to get away from the heat of the city for the weekend — the day the civil war broke out in 1975. They never would return to their home in Beirut. Instead, they took refuge in the hotel the family owned, the Coral Beach, because Massoud’s father had contacts in the nearby embassies and was able to secure the services of their bodyguards to protect the hotel and its inhabitants. Other displaced families also found their way to the Coral Beach Hotel.

“We ended up all becoming one huge family of survival during this horrible, horrific war that the country was being plunged into,” Massoud said.

Later on, the hotel became a Red Cross headquarters, further disincentivizing the various militias from attacking it. Daily life within the luxury hotel took on the aspect of what Massoud refers to as “an oasis of peace in a land of insanity.” His formative experiences during those years would set him on the path to becoming a chef and restaurateur.

In particular, Massoud fondly remembers family meals in the presence of the restaurant staff, which conjured the oasis-like feeling he strives to impart to his restaurants today.

“Those were my favorite meals to eat, with all the chefs. They would set up this huge, long table in the pastry department and we would sit all of us together. They would all be in the whites, and I'd be chowing down on the family meal,” Massoud said.

In 1985, when he was 14-years old, Massoud fled Lebanon as a refugee and moved in with his aunt’s family in Scarsdale, N.Y. He was safe from the horrors of the war. He no longer needed to fear for his life. But the culinary perfectionist in him was irrepressible: where none of the Lebanese food he ate lived up to his memories of family dinner at the Coral Beach, he realized he would have to make the food himself.

Out of Massoud’s early life in Lebanon, two dominant tendencies emerged which would remain with him even into the present: on the one hand, a desire to recapture his memories of that lost world, his oasis of peace and refinement; and on the other, a hardy self-reliance and courage instilled by the brutality of wartime Beirut. To these tendencies can be attributed, respectively, Ilili’s concept and its execution.

From crisis to crisis

Massoud opened Ilili in November of 2007. He had just returned from Washington, D.C., where he spent four years working to develop the Mediterranean restaurant Neyla. Perceiving that in New York City Lebanese cuisine had been mostly limited to its street food repertoire, he sought to introduce New Yorkers to the food that he remembered eating in the Coral Beach Hotel.

“In 2007 people accused me of being a little bit crazy — to not choose other words — because nobody thought that Lebanese cuisine could be represented or elevated in such a setting. And that's because people are used to eating out of the supermarket shelf or from the street cart. And they don't realize that it can be a lot more refined, a lot lighter, more vibrant, healthier,” he said.

But months after Ilili opened, the economy crashed. Consumer demand plummeted, and restaurants struggled to retain staff. Massoud had every reason to be nervous: he had gone heavily into debt to launch his restaurant. But he had been through worse, and he knew that the last thing he should do was panic.

“I do well in crisis management because that's all I knew as a child,” Massoud said. “My approach has always been that it will end at some point, so let's not get sucked into the negativity.”

Ilili survived, and the economy rebounded. Over the ensuing nine years, the concept thrived.

Then the pandemic hit, and in March 2020, Ilili closed its doors. Massoud claims that those early days of the pandemic were more of a trial for his restaurant than the recession ever was, because so little was known about COVID at the time. With little information to work with, he couldn’t form a plan.

After a little over a month, as the mechanism of COVID’s transmission became better understood, Massoud decided he couldn’t wait any longer to reopen. On May 28, Ilili reopened with a small staff for deliveries only.

“I think we all, all of us New Yorkers, have collective PTSD from COVID. In a way, there is a collective trauma that's happened, but we had to let go. And then, I decided late April that enough was enough and that we were going to reopen the restaurant,” Massoud said.

According to Massoud, the reintroduction of outdoor dining later that summer saved Ilili. Since then, it has been a steady march to recovery and now growth.

The new location in Washington, D.C., is not likely to be the end of Ilili’s growth. Massoud has plans to roll out vegan and seafood concepts, and he is looking to expand into other markets: Miami, Chicago and Los Angeles are all possibilities.

Wherever Ilili goes next, diners will gain a small bit of access to the childhood memories of a chef who found something joyous in the worst of circumstances.

“What is amazing, if you think about it, is that Ilili is the food as I remember eating it as a child in Lebanon,” Massoud said. “Every single recipe that I did is based on my memory of what it is that I ate. And that to me is unreal. It's unbelievable that someone's childhood could impact them so much that they end up recreating it through food. I always admired how powerful our childhoods are, because I never in my wildest dreams thought that I would be doing what I'm doing now.”