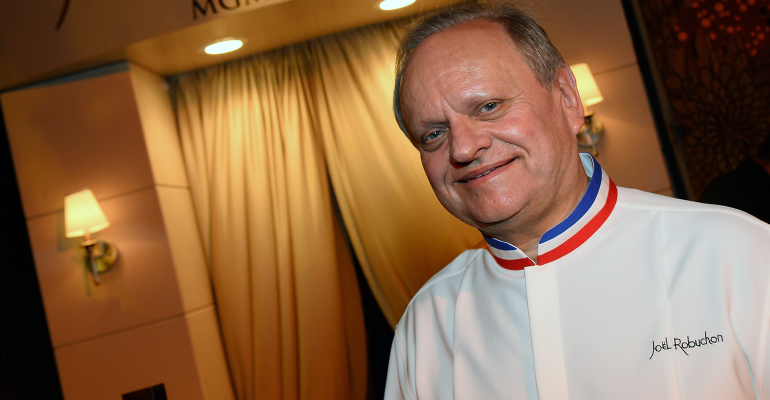 The acclaimed French chef Joël Robuchon died in Switzerland on Saturday after a battle with cancer, according to Le Figaro. He was 73.

Known for his contemporary and meticulous take on French fine dining, Robuchon had 12 restaurants around the world, including L’Atelier de Joël Robuchon, which reopened with Invest Hospitality last year in New York City after a five-year absence.

Robuchon had accumulated the most Michelin stars of any chef in history. He was also awarded the Meilleur Ouvrier de France (best craftsman) in 1976 by the French government; and named Chef de L’Année (chef of the year) in 1987 and Cuisinier du Siècle (cook of the century) in 1990 by the French gastronomic guide Gault & Millau.

A bricklayer’s son who considered a life of service to God before an apprenticeship led him to a career in the kitchen, Robuchon was heading the culinary team at the Concorde Lafayette hotel at age 29, according to his bio for L’Atelier.

His first restaurant was Jamin, which opened in late 1981 in Paris, earning one Michelin star the first year, two the second and three by the third year.

In 1994, the chef opened the restaurant Joël Robuchon, named the best restaurant in the world by the International Herald Tribune in 1994. At age 50, Robuchon “retired,” expanding his brand as a television chef, but later returning as a restaurateur with L’Atelier, first in Paris in 2003.

With that concept, Robuchon stripped away many of the trappings of fine-dining, removing tablecloths and chandeliers, which at the time was seen as a revolution, according to Pete Wells at The New York Times.

He brought L’Atelier to Las Vegas in 2005, then New York, London and Hong Kong, adding more cities down the road.

Chefs across the food world took to social media to express their grief, including Gordon Ramsay, who got his start at Jamin, and Eric Ripert.

We’ve Lost The God Father of Michelin the most decorated Chef in the World, he kept all of us on our toes ! Even when we were sleeping ! Merci Chef, God Bless you’ll be missed pic.twitter.com/5vY2UlpCwP

Shocked and very sad by the loss of my Mentor Joel Robuchon. The most rigorous,precise,demanding,
ultra gifted King of all Chefs...
RIP Monsieur Robuchon pic.twitter.com/RCx8cj5m1I

So heartbroken .. Monsieur Robuchon .. you will be missed . Thank you for all you have done R.I.P ... joel.robuchon https://t.co/NUH0FokWTG

Pam Parseghian, former executive food editor of Nation’s Restaurant News, did a stage with Robuchon at the restaurant Joël Robuchon in the early 1980s.

“He was brilliant and super serious, but also very generous and he loved to share information,” she said. “He was driven like no chef I know. He was very focused on keeping things consistent.”

This article has been updated to include an additional reaction from the food world.
0 comments
Hide comments
Recommended Reading