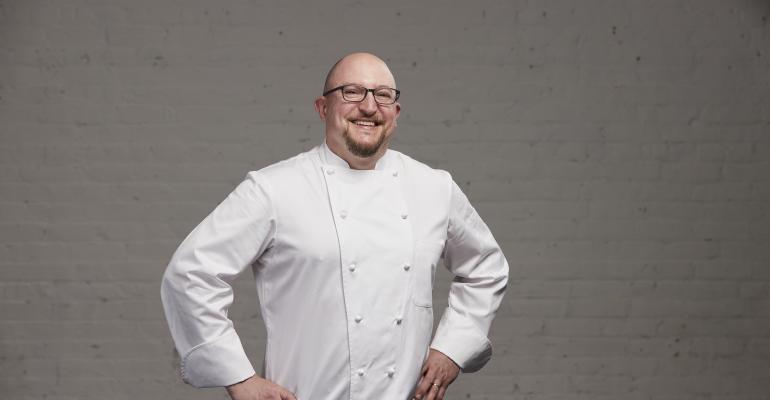 The James Beard award winner in 2008 for best chef: Midwest plans to open the new fine-dining concept Lupi & Iris in mid-May in a ground floor space of the 7Seventy7 building, a luxury apartment building in downtown Milwaukee that opened in 2018.

Siegel, who partnered with real estate developer Michael DeMichele, said the sprawling Wisconsin restaurant will focus on French and Italian cuisine. It’s a first restaurant for Siegel as owner; he previously worked with the Bartolotta Restaurants group, including Lake Park Bistro and Bacchus. Siegel also has worked at Spiaggia in Chicago, and San Domenico in Imola, Italy.

"I really wanted to stick with doing [what] I know," Siegel said. "This will be Mediterranean — French and Italian Riviera-inspired."

The restaurant takes its name from the owners' families. Lupi, which means "wolf" in Italian, was the last name of his wife's step-father. "He loved being in the kitchen with me," Siegel said. "We became quick friends."

Iris was the name of DeMichele's grandmother, who emigrated from Italy and passed down her beloved recipes.

"Family means something to us," said Siegel, whose wife of 23 years, Daria Aitken Siegel, works in real estate but will have a role creating floral arrangements. Their son, Zachary, attended Kendall College's culinary school and works at Chef Paul Virant's Gaijin in Chicago — and might one day end up in his father's kitchen, Siegel said — while their daughter Georgia, a high school senior, will also help out.

The menu is still being finalized but in keeping with the Mediterranean vibe, cooks in an open kitchen will prepare dishes with olive oil instead of butter and there will be an emphasis on seafood.

Bouillabaisse for two will be offered along with paella and hand-made corzetti pasta, and the wood-burning oven and wood-burning grill will turn out meats and seafoods accompanied by different sauces, including a persillade version with parsley and garlic.

Desserts will likely include an olive oil cake with citrus and meringue-topped sweets.

"There's really nothing like that around here," Siegel said. "I think this is going to be a great thing for the city of Milwaukee."

A glass-enclosed and temperature-controlled wine room will hold up to 2,000 bottles from such locales as Italy, France, California and Oregon, with about 200-250 selections available at any one time by the bottle or glass, he said.

As for the location, it's "perfect," Siegel said. The residential high rise is in the heart of downtown within blocks of both the Lake Michigan lakefront and several major hotels and businesses, with easy access to a highway and eight floors of parking above the eatery. The city-block-long restaurant is 10,500-square feet.

"It's a fine dining restaurant, but large in scale," Siegel said. "I'm hoping that it places Milwaukee as an up-and-coming food city."

Lupi & Iris will seat 346 guests in six dining and drinking areas including a large outdoor patio that will seat 56; a U-shaped bar with 18 stools and 46 seats at tables; and an elevated lounge area with 18 seats in a cozy nook.

The main dining room has 84 seats; a chef's counter for eight diners; and a private dining space that can accommodate 80 to 100 people for banquets and special events.

The place will employ almost 100 people, and "we're very proud of that," said Siegel.