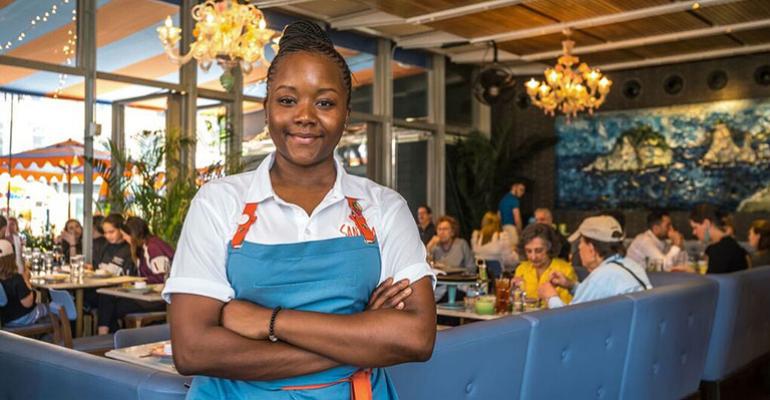 Ashley Eddie’s approach to cooking at Santina in New York is straightforward: Simple but not basic.

The Brooklyn native was recently promoted to executive chef of the coastal Italian restaurant. Santina is part of Rich Torrisi, Mario Carbone and Jeff Zalaznick’s Major Food Group, which runs nine concepts in New York City, ranging from the casual five-unit Parm, which specializes in hero sandwiches, to The Pool and The Grill, the reimagined very-high-end restaurants in what was once the legendary Four Seasons. 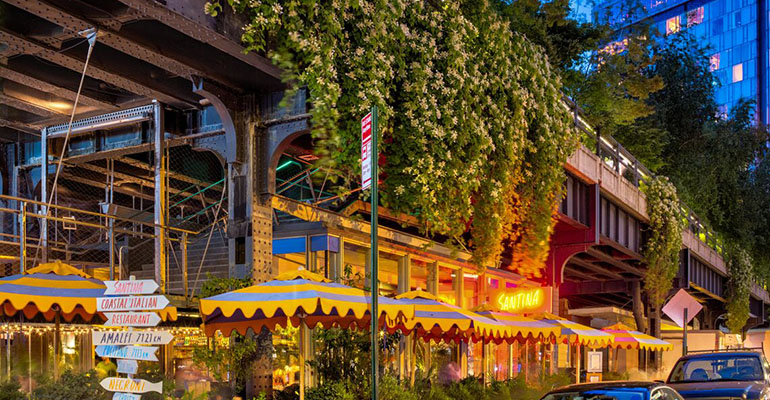 Santina’s menu focuses on seafood and vegetables. Cecina — chickpea pancakes topped with combinations such as avocado with almond pesto and tomato, or rock shrimp and ginger — are a signature appetizer. The salads, fish and pasta that make up most of the rest of the menu tend to include simple, if not necessarily traditional, combinations, such as artichoke and grapes with cardoons and hazelnut, and radish and salmon with lemon and coriander.

All of the dishes, including the pastas, can be made gluten-free.

Although Eddie was just promoted at the end of May, she has been at the restaurant since February of 2015, when she started as a line cook after answering an ad on Craig’s List.

“Coastal Italian cuisine sounded appealing to me, and I came to see what it was all about,” Eddie said. “I sat with chef Dan Haar in this little interview and I came for my trail the next day and I’ve been coming back here ever since.”

Eddie grew up in the Brooklyn neighborhood of Crown Heights, cooking with her grandmother, aunts, and mother.

“I have a big family, so cooking all the time is one of those things that we all knew how to do growing up,” she said. “Not all of us are lovers of the field, but we all know how to cook.”

From the southern side of her family, she learned to cook collard greens and fried chicken and fish. “But I do have an uncle who’s Jamaican, and my aunt would make rice and peas, curry chicken, curry goat, cow-foot soup. It’s a weird thing for a kid to say they liked cow-foot soup, but it was really good,” she said.

After culinary school at The Art Institute of Pittsburgh, she returned to New York and started working her way through professional kitchens, but she hadn’t done much work with Italian food until she got to Santina.

“I know everything I know about pasta and Italian food from Santina,” she said.

“I’d never heard of Calabrian chiles, I didn’t know an almond could be a special thing until I got here. I was: ‘Oh, it’s an almond. Who even cares?’ because it’s an almond. But Noto almonds are delicious,” she said of the southern Sicilian delicacy. “You really taste the difference between a Noto almond and a Marcona almond,” she said. “I’d never seen anything like it before.”

They’re featured in a burrata dish that Eddie has added to the menu. She uses it in a sort of pesto with roasted red pepper, white wine vinegar and olive oil. That goes into the bottom of a bowl that she tops with the cream-stuffed mozzarella and then tops that with a salad of similar ingredients: tomato, basil, roasted red peppers, Noto almonds and parsley dressed in olive oil and white wine vinegar. 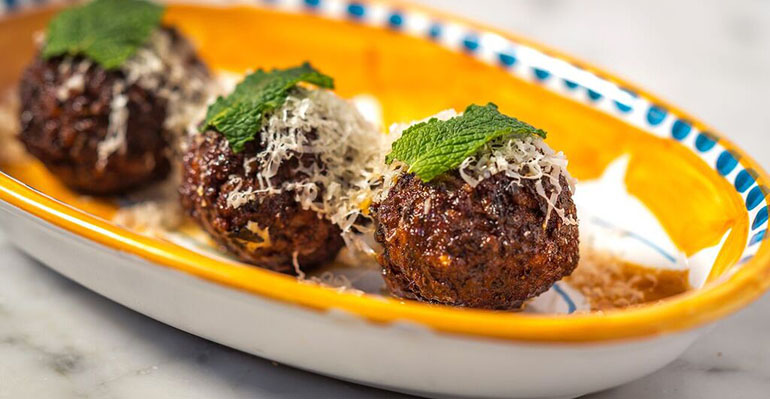 She also reworked the lamb meatballs, above, made with Sicilian oregano, onions, garlic and pecorino cheese, as she moved to make the entire menu available without gluten.

“We had an existing recipe that we loved and that sold well, but it wasn’t gluten-free,” she said, because it was held together with panko breadcrumbs soaked in milk. She swapped that out for slightly overcooked rice. “It still has that velvety texture, and it’s still moist and juicy.”

Eddie also turned eggplant Parmigiana on its ear, changing it from a heavy deep-fried affair that tastes mostly of marinara sauce to a lighter dish in which you also taste the eggplant.

“We wanted an eggplant Parmigiana that was simple but not basic,” she said — taking good ingredients and letting them speak for themselves. “We wanted to keep all the same elements and keep it light.”

She starts with thick slices of large American eggplant, which she salts and presses to remove some of the bitterness and then gently dusts it in rice flour. She deep-fries it hot and fast and dresses it with a raw marinara sauce — grape tomatoes quickly blistered with sautéed garlic and passed through a food mill — along with Pecorino cheese and some gluten-free breadcrumbs. It’s finished under a salamander and served with a garnish of large basil and parsley leaves.

“It’s filling but not heavy at all,” Eddie said. “It’s one of my favorite things.” 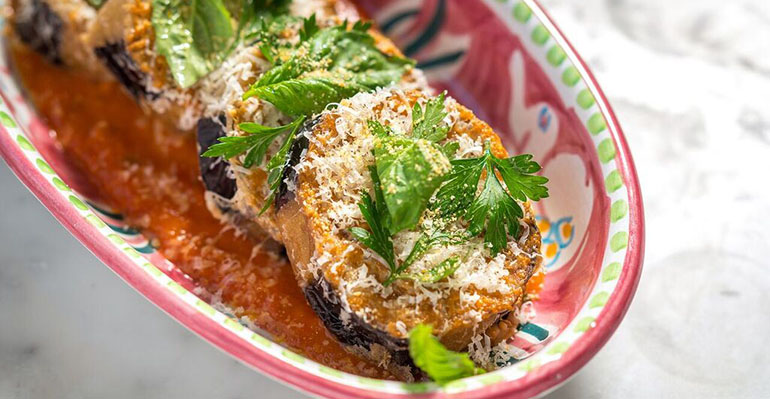 But she might be most proud of her new Lobster Arrabbiata.

“We used to have a whole lobster with seasonal garnish — last time it was squashes and squash blossom. No one bought it,” Eddie said.

“I was like, I have lobster in the house, I’m paying for lobster, I need to sell the lobster, and once it dies I can’t use it.”

“It’s not a problem to sell,” Eddie said. “We were thinking about ways to make it more visually appealing — maybe adding a claw in there — but it sells itself.”

“When I first started out I thought I was always going to be in a mom-and-pop shop that only had one restaurant, and they could focus on that one place. But I see Mario Carbone and Dan Haar every week, and if I need something I can email them. Initially I thought it was going to be too distant, and it’s not that at all.”

She said she likes that, although it’s become kind of a big company, “It’s not corny; it’s not stuffy; it’s not boring.

“I really love working for this company,” she added. “My goal is to grow my sous chefs now so, if and when I do leave, they can bring their own style and have the opportunity to move up.

“Right now, I’m just taking this role seriously and investing as much as they’ve invested in me, and make them proud while I’m doing it.”