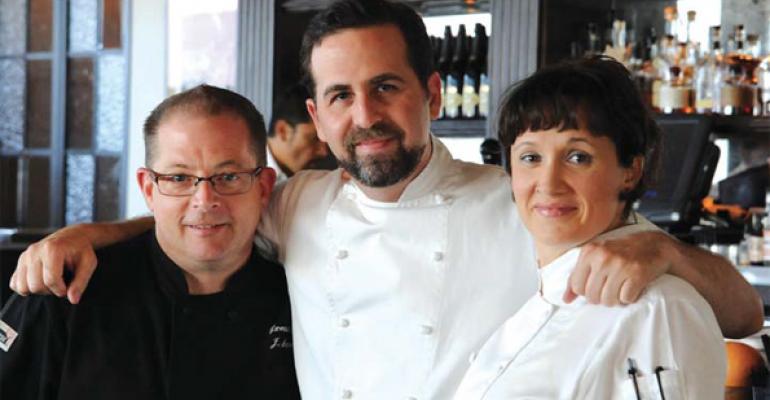 Perhaps more than anyone, Tal Ronnen has made vegan food appealing to the masses. &bull; See more Chef Interviews

Before opening his Crossroads restaurant on West Hollywood’s Melrose Avenue last year, Tal Ronnen was a known quantity among celebrities bent on a plant-based diet. He’s collaborated on business and personal ventures with the likes of Oprah Winfrey, Ellen DeGeneres, rocker Chrissie Hynde and hotel/casino magnate Steve Wynn. Ronnen teamed with chef Art Smith on menus for the growing LYFE Kitchen chain. And the vegan chef was instrumental in the development of Gardein, a vegan protein blend that stands in for chicken, beef and seafood. He has also penned a New York Times best-selling cookbook, The Conscious Cook.

RH: How would you describe what you offer at Crossroads?

Ronnen: We decided when we opened that there was going to be a theme to the food. It wasn’t going to be all over all the place like you get in many vegan restaurants where you see miso soup, nachos and a reuben all on the same menu. It never made sense to me that you’re mixing all those cuisines. We decided that we were going to be strictly Mediterranean, pull from my French influences and Scotty’s Italian influences. We do some North African, Middle Eastern, a little coastal Spain, so everything kind of goes together here. And we decided to do all small plates, so there’s nothing over $14. You can order a lot of different dishes to try and build your own meal instead of ordering a salad and an entrée that has a protein, a vegetable and a starch. We’ve deconstructed that and you can order your own two vegetables and one protein or a starch. I think the days of that sort of plate setup are really on their way out, especially with animal protein being at the center of the plate.

RH: What about lunch service?

Ronnen: We just opened for lunch, in what we call our wine and cheese room. We didn’t want to take away from dinner service, so we do very simple lunches. We make sandwiches using cheese from Kite Hill, a company I started in Palo Alto that produces the first cultured and aged cheese made from almond milk. The sandwiches are simple, made with the cheese, Persian cucumbers and a nice baguette. We also serve salads and soups and house-made pasta specials. The room, at the back of Crossroads, was designed to look like a cheese shop. The dining room, on the other hand, was designed to look like a really cozy steakhouse.

Ronnen: Everything we do here is the opposite of what people typically think a vegan restaurant is. We are white tablecloth, but we’re not stuffy. We have a full bar with an amazing wine list, with wines ranging from $45 to $1,600 a bottle, and they sell. We don’t even use the word vegan at the restaurant.

RH: Do you have any idea how many of your guests are in fact vegan?

Ronnen: Very few; I’d say 95 percent of our guests are not vegan or vegetarian.

RH: If that’s the case, then why bother serving vegan food?

Ronnen: It’s the way I’ve chosen to cook, and it’s the lifestyle I lead personally. This is my contribution to people who might want to eat plant-based food but don’t want to do it full-time. They might not want to soak lentils or cook quinoa, and they can come here and it’s done for them. They can have a really nice night on the town, with good wine and good music. There’s a great vibe here at night. The seats are really comfortable, and people tend to stay awhile.

RH: How has the community responded?

Ronnen: We were picked as the number four best new restaurant in L.A. by Los Angeles magazine, something I respect because their food critic, Patrick Kuh, is a James Beard award-winning food writer. It was pretty cool to see, and it’s nice not to be compared to other vegetarian restaurants, but to all other restaurants.

RH: Apparently certain celebrities like what you’re doing, too.

Ronnen: Every night you’ll see someone, which is a pain in the butt, because there are always paparazzi outside. It’s crazy.

For seven years I worked for Garden Protein, which makes Gardein. That was an amazing experience. Instead of a restaurant, which can only reach so many people, this food was going all over the country, going to 14,000 supermarkets, so it was really gratifying to know we were reaching that many people with what we created.

RH: Why did you launch Kite Hill?

Ronnen: A lot of vegan cheese products out there are pretty grim. And they aren’t made from real food. Our ingredients are literally almond milk, enzymes and salt—identical to what cheese is made from. If you think about it, cheese has always been made from different milks: cow’s milk, goat’s milk, sheep’s milk. This is just a different milk.

RH: What was it like to work for Steve Wynn?

Ronnen: I developed 19 vegan menus at the Wynn Las Vegas. Steve became a vegan a couple of years ago and he asked me to come on board to design a menu for every restaurant. So even at the steakhouse, SW, you get the regular menu, the wine list and the vegan menu. It was really fun. If you order room service you can get my cashew cheese nachos, vegan pancakes for breakfast, “chicken” and waffles—all of that. At the seafood restaurant you can get vegan clam chowder, at the Asian restaurant you can get vegan dim sum. It took two years to finish that project.

RH: Did the big names behind some of those restaurants resent your involvement?

Ronnen: I think they did at the beginning, but we when we first met I made it clear that I wasn’t there to teach them how to cook. I was there to show them some tips and tricks, which they really appreciated and we still keep in touch. I get texts from them with pictures of new vegan items they have developed and we have become very close.