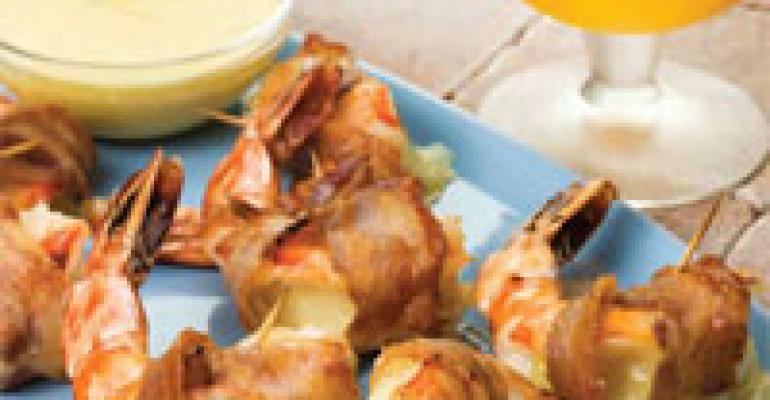 Beer and Food: Trend and Tradition

It's almost summertime, and the sipping should be easy. For most Americans, that means coolers packed full of icy-cold mass-market lagers made in the pilsner style. Mass-market pilsners represent the majority of beer production in the United States; the light beer category accounts for almost 50 percent of beer sold nationwide.

Yet craft beer is the fastest-growing segment of the beverage alcohol category, according to data collected by Chicago-based Information Resources, Inc. (IRI). Craft brewers, as defined by the Brewers Association (the industry's trade group based in Boulder, CO), are small, with an annual production of less than 2 million barrels; independent; and traditional in their use of all malts and brewing ingredients designed to heighten, rather than lighten, flavor. Though the category is growing, so are pressures on the industry.

Traditional brewing ingredients — malted barley and hops — are doubling or even tripling in cost due to crop shortages and currency changes that affect imported ingredients. Craft brewers are turning to the kitchen, finding inspiration in herbs and spices to augment the aromatics of hops. For example, Elysian Brewing Co. of Seattle makes a special IPA brewed with dried jasmine flowers. New Belgium Brewing Co. of Ft. Collins, CO, features Asian schizandra and Goji berries in their Springboard ale. Stone Brewing Co. of Escondido, CA, uses different herbs and spices each year in their Vertical Ale seasonal, from Kaffir lime leaf to ginger or cardamom.

In fact, the use of herbs and spices to add aromatics is a brewing tradition even more ancient than the use of hops. Medieval ales were made with fruits, or dried herbs, berries and roots.

Even seafood makes an appearance in the Anheuser-Busch Chelada, which is a mixture of Clamato Tomato Cocktail from Cadbury-Schweppes and lime-flavored Budweiser or Bud Light lager.

Beyond brewing, culinary co-marketing with chefs and food producers yields plentiful possibilities for many brewers, large and small.

Brent Wertz, executive chef of the Kingsmill Resort, an Anheuser-Busch property, created beer and food pairings for the Charleston Food & Wine Festival. David Burke, executive chef of davidburke+donatella in NYC, teamed up with Jim Koch of the Boston Beer Co. to create a database of pairings for Sam Adams brews. And this month, the Brewers Association hosts SAVOR: An American Craft Beer and Food Experience, featuring more than 100 food and beer pairings, presented at the Andrew Mellon Auditorium in Washington, DC.

“We believe that tying beer to food is the way to keep craft beer sales growing,” says Julia Herz, director of the SAVOR festival and craft beer programs for the Brewers Association.

Some restaurateurs take craft brews to the table with prominent marketing of malt-driven creativity. Frank Morales, executive chef of Rustico's in Alexandria, VA, uses all kinds of specialty condiments to highlight the flavors of beer and food pairings, making reductions of various beer styles into malty molasses, mustards, sauces and glazes.

“With our emphasis on seasonal foods and seasonal beers, it's actually pretty easy to be creative,” says Morales. “Beer is no longer the underachiever of the beverage category. Today, I shared a bottle of the 2006 Old Stock Ale from North Coast Brewing Co. with a friend of mine who is a chef, and asked, “Did you ever think we'd be talking about vintage beer?”

Morales describes himself as a “Connecticut Yankee discovering foods south of the Mason-Dixon line.” The chef takes indigenous ingredients such as Virginia country ham, and presents it in a grilled panini instead of prosciutto. “Top it with aged Cheddar and it's a perfect match for the Bell's Brewery's incredibly hoppy Two Hearted Ale,” says Morales.

Chef Nathan Berg, chef/owner of Native Bay, Chippewa Falls, WI, makes beer work as an ingredient as well as a pairing. He tops an amuse-guele of buttery brioche with a gelée made from Central Waters wheat ale, topped with a toasted hickory nut. The nutty flavors and cool beer melt together on the palate.

And adapting the “Iron Chef” model of culinary smack-downs, several brewers are experimenting with “Beer vs. Wine” dinners, where each dish is presented with pairings from both a sommelier and a brewer. Greg Koch, CEO of the Stone Brewing Co., Escondido, CA, teamed up with Chef Gavin Kaysen of El Bizcocho of the Rancho Bernardo Inn in San Diego, CA (now at Cafe Boulud, NYC), and sommelier Barry Wiss, for such a competition. Beer won over wine in some surprising pairings, such as a warm salad of English peas, sautéed morel mushrooms and sherry, paired with the Koningshoeven Dubbel ale tasting of sumptuous malt and fruity yeast esters, to beat the Trinchero Chardonnay.

Sam Calagione, owner of Dogfish Head Brewing Co. of Milton, DE, has even penned a book with sommelier Marnie Olds, “He Said Beer, She Said Wine,” (DK Publishing, 2008, $25), in which both compete to craft the perfect pairing.

Yet for every independent chef who champions craft beer at the table, there are millions of Americans who prefer to drink light beer.

This year, Miller Brewing Co. is targeting both audiences with a new launch, the Miller Lite Brewers Collection, tagged “Craft beer, done light,” featuring low-calorie wheat, amber and blonde ales. Fans of the light beer style will probably enjoy the subtle tastes at just 116 calories per serving. It's the big brewer's try to capture the best of craft beer and thirst-quenching refreshment, just in time for summer.

Lucy Saunders is the editor of beercook.com, and author of a new cookbook, The Best of American Beer & Food: Pairing and Cooking with Craft Beer (Brewers Publications, 2007, $22.95).

Shake ingredients in a pint glass with ice. Strain over ice into a Collins glass and garnish with a thin lime wheel.