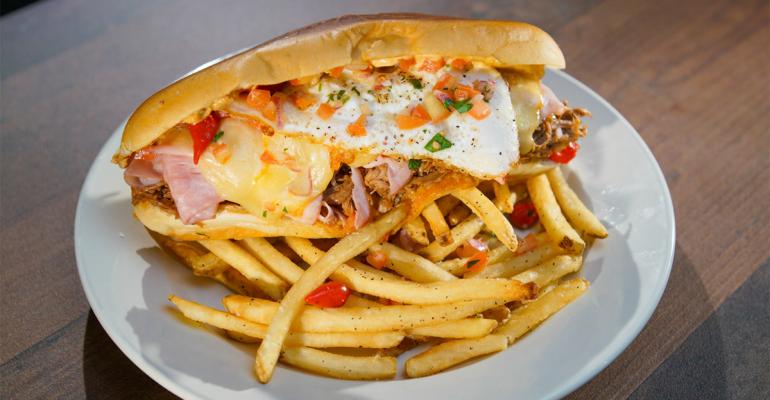 Sandwiches are a way of life for many Americans, but the United States is not the only country that loves to put protein and condiments between bread. The Chivito, made with steak, ham, cheese, mayonnaise and often bacon and a fried egg, among other condiments, is considered the national dish of Uruguay, and Amistad Grill’s version in Homestead, Fla., is a satisfying version topped with French fries.

In Duluth, Minn., Tavern on the Hill celebrates the local crop of wild rice by making it into both a sandwich patty — held together with Asiago cheese and panko breadcrumbs — and a major ingredient in the bread for the Wild Rice Melt, illustrating how plant-based sandwiches can also reflect local customs.

Related: The Best Sandwiches of 2022

The bologna sandwich was once a childhood favorite of many Americans, but at The Kitchen American Bistro it’s given an upscale touch by using bologna’s ancestor, mortadella, and garnishing it with Mornay sauce and pistachio gremolata.

At Spinellas in Gresham, Ore., a shrimp sandwich benefits from hand-crafted nuances such as creole seasoning and a mango pineapple slaw.

But can a sandwich be a dessert? The operators of Better Than Sex in Orlando, Fla., certainly think so, and so do their customers who happily shell out $14 for brie, blueberries and white chocolate between Texas toast.