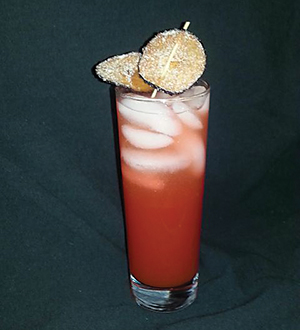 Inspiration: To honor a spirit that was the first to be called a cocktail or martini.

What Others Said: Third place winner in a Bombay Sapphire Cocktail Contest in Louisville

What the Judges Said: “First of all, we want to move to Louisville if you can get such a beautiful, hand-crafted cocktail like this for eight bucks! We were smitten by McCarthy’s red plum syrup, which marries beautifully with the all the botanicals in the gin. Add to that the hand-made orgeat-rosemary soda, and this is a bangin’ cocktail. The soda topper tames the botanicals just enough, while adding a slight herbal dimension of its own. On top of all that is a dried plum chip garish, which is a crowning achievement on a terrific cocktail.”

Next: Without Fear
Previous: Gone to Carolina