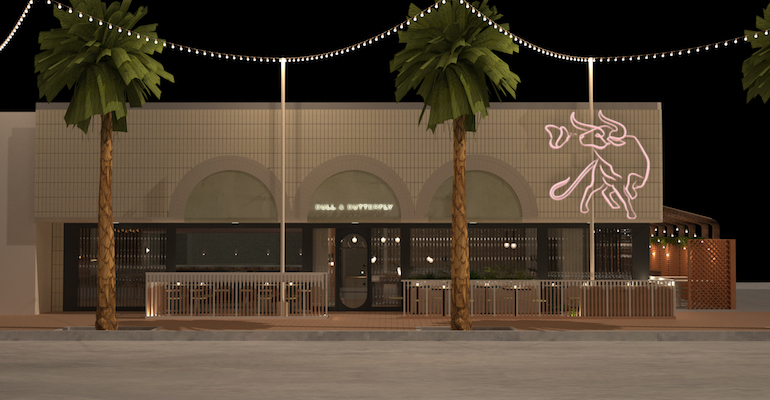 The founders of the fast-casual eatery Lemonade are readying the launch of a new Santa Maria/Baja-style steakhouse in Los Angeles this fall.

Alan and Heidi Jackson, who are business partners and married, sold the Lemonade chain that merged with Modern Market Eatery earlier this year, though they maintain a stake. But the two have moved on to other projects, including the pending launch of Bull & Butterfly, described as a steakhouse “with the longitude and latitude of California” that will bring a lighter, more rustic spin to the traditional concept model that leans toward “dark wood, dark spaces and heavy entrees,” said Alan Jackson.

The menu, for example, will be built around proteins grilled over charcoal and mesquite. It will include a carne asada section with thinner cuts that might be served with sides like pinto beans and a roasted corn and quinoa relish; as well as a Butcher’s Section with more traditional steaks and higher-end cuts.

Really, the name came first, said Alan Jackson, saying it represented “our business relationship and our family relationship in that our roles are sort of interchangeable. Who’s the bull and who’s the butterfly?” he said. “The ‘wink wink’ is that, generally, I’m probably a little more the butterfly.”

The Jacksons have tapped longtime friend and chef Ben Ford as operating partner to help execute the menu. Ford was a chef at the restaurant The Farm of Beverly Hills, which Alan Jackson co-created and later sold in 1997. Ford, who is actor Harrison Ford’s son, left The Farm in 1998 to open his own fine-dining restaurant Chadwick, and later Ford’s Filling Station, both concepts also in Los Angeles and now closed.

The 3,900-square-foot, 165-seat Bull & Butterfly will debut in the heart of Playa Vista, a neighborhood known as a hub for tech companies and sometimes called Silicon Beach. The restaurant will replace a LYFE Kitchen outlet there.

Alan Jackson said the open kitchen will include a big Wood Stone grill, as well as a Josper oven from Spain. “So we’ll have a lot of vegetables cooked in the Josper, and bigger cuts of meat, grilled, roasted and smoked at the same time,” he said.

The goal is to make the concept accessible, with a blended lunch/dinner average check of about $46 per person. “We’re looking at the Del Frisco’s Grille sort of model,” he said.

There are 57 wines on the wine list, for example, mostly focusing on Chile, Argentina and Spain up through the Valle de Guadalupe in Mexico and into the Central Valley of California. “We’ve been able to find real value in these regions, versus focusing on the big boys out of Napa,” he said.

The Jacksons are also grape growers. The couple has a vineyard named Proud Rebel in southern Oregon growing pinot noir for other wineries.

The two also have a manufacturing operation. The Jacksons have converted the former Lemonade commissary into a manufacturing facility called Bear State Kitchen, which supplies other restaurants with things like soups, salads, sauces, dressings and marinades.

Clients include some airlines like Air France, as well as the Trejo’s Tacos chain and a Los Angeles-area grocery story, Alan Jackson said.

“Our position is to be there for brands that cannot yet scale into a commissary, and at the same time don’t have enough scale for the bigger providers to manufacture their proprietary items,” he said.