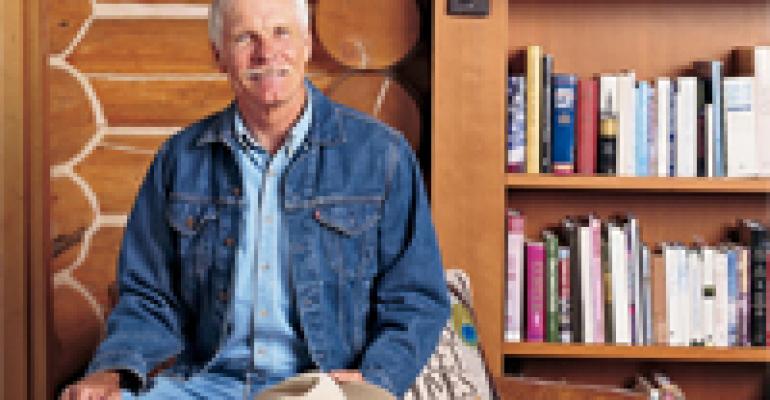 Friend Of The Earth, A Large Part Of Which He Owns

Ted Turner—media entrepreneur, environmentalist, land baron and casual dining restaurateur—stirred up a hornet’s nest earlier this month when he proclaimed that much of humanity will be extinct a few decades from now. “We’ll be eight degrees hotter in 10—not 10 but 30 or 40 years and basically none of the crops will grow,” he said. “Most of the people will have died, and the rest of us will be cannibals.” Given that forecast, it’s fair to ask: What kinds of eco-friendly initiatives are underway at Ted’s Montana Grill right now?

When Restaurant Hospitality honored Turner with our Richard Melman Concepts of Tomorrow award in 2003, little did we know that we should have paid less attention to his “concept”—Ted’s Montana Grill—and more to the “tomorrow” aspect of his business. We were right on the money about his concept; Ted’s Montana Grill had 11 units then, and has grown to 57 today. But we didn’t pay much attention to his vision for the future. It’s pretty dour, as he explained to Charlie Rose in an April 1 interview on PBS that was no April Fool’s Joke. Turner, appearing as chairman of his United Nations

Foundation, thinks the world is suicidal on several fronts—with global warming being the worst of them all.

Turner, CNN’s founder and cable TV mogul, is a man of wide-ranging interests, including the two million acres of land he owns that makes him the largest private landholder in the country. He’s also the largest buffalo rancher in the U.S., raising much of the meat served in his restaurants. And he loves the restaurant business so much that at age 70, he still comes out to work the crowd at the opening of a new Ted’s Montana Grill.

So it was no surprise that a week after announcing the onset of the apocalypse on national TV, Turner could be found giving a speech to the Greater Philadelphia Chamber of Commerce. A new Ted’s Montana Grill had recently opened in Bucks County, PA, and Turner and his restaurant chain’s c.e.o., George McKerrow, Jr., were on hand at the chamber luncheon to fill in the locals on how they did business. The pair proudly noted that their new Warrington, PA, unit had posted the highest revenues in the chain for the prior week.

Turner and McKerrow detailed the long list of eco-friendly features they build into every Ted’s Montana Grill. Ted’s menus are printed on recycled paper, and the butcher paper that lines the dining room tables comes from recycled stock, too. On the beverage front, soft drinks come in recyclable glass bottles and drinking straws and to-go cups are both made of readily biodegradable cornstarch. Low-voltage compact fluorescent lighting has been installed in all Ted’s units, and the chain equips its men’s restrooms with waterless urinals where local regulations permit. Go into the bathrooms at any Ted’s and you’ll find powdered Boraxo hand soap—it’s the most biodegradable option. Used cooking oil winds up as fuel for biodiesel vehicles. And a high percentage of each unit’s paper, plastic, aluminum and glass gets recycled.

The company even is looking into solar and wind energy, and has installed solar panels on the roof of one Florida unit.

In short, most of the recommended green restaurant strategies available have been put into place at Ted’s Montana Grill. So what’s the return on all this? In dollars and cents, not much. McKerrow said solar panels only reduced the Florida unit’s electrical bill by five percent. He noted that the fluorescent bulbs are four times as costly as standard fluorescent ones, but they use less energy and last longer. And those cornstarch straws and to-go supplies cost about twice as much as the paper and plastic versions they replace.

So while Turner definitely walks the environmental talk at Ted’s Montana Grill, the payoff so far is negligible, or worse. Why should other operators go green if it’s so costly?

Turner and McKerrow agree. As the latter told his Chamber of Commerce audience, “state and local governments should ‘incentivize’ green power to help us all get started.”

An excellent idea and, now that we think about it, one that really hasn’t come up before. Let’s face it. Despite high interest in green restaurants among restaurant owners and restaurant customers, only seven restaurants in the country have so far qualified for LEED (Leadership in Energy and Environmental Design) certification. Perhaps the highly effective lobbyists at the National Restaurant Association can get something going on the incentive front when the next Congress takes its seat in January, 2009, if not before. Given the massive subsidies directed toward ethanol producers, would a tax credit for “green” restaurants really be out of place?

Meanwhile, Ted Turner rolls on. The next Ted’s Montana Grill is scheduled to open on May 5 in Cummins, Ga. Plenty more are on the way, McKerrow promises.
Recommended Reading