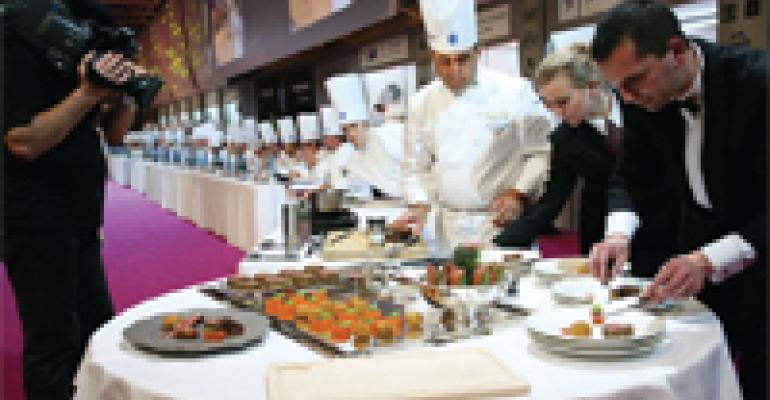 Coming Up Short At the Bocuse d'Or

Some in the U.S. culinary community felt let down by the results of the 2009 Bocuse d'Or cooking competition, which took place in late January in legendary chef Paul Bocuse's hometown of Lyon, France. The format: two-person chef/commis teams from 24 nations go head-to-head to see who cooks the best.

The story for the United States wasn't so much who won — Norway's Geir Skeie took first — but that U.S. entrant Tim Hollingsworth placed sixth.

This was a solid finish, similar to what prior U.S. entrants Gavin Kaysen and Helmut Handke had achieved. But under the leadership of star chefs Daniel Boulud and Thomas Keller, the U.S. team had made a concerted effort to do better in 2009.

First came an eight-team cookoff in Orlando to select the U.S. entrant (Hollingsworth), followed by two months of intense practice under the watchful eyes of Keller and other high-profile chefs. All this and the U.S. team still didn't make the podium.

Oddly, neither did Denmark's Jasper Kure (fourth place), who took special prizes for both the best fish dish and best meat dish — the only two proteins used.

The larger question remains: Bocuse d'Or celebrates a type of hyper-fussy, ornately arranged food no one really makes in the U.S. any more, other than when entering this contest. It would be great if the U.S. won, but there's no reason to feel bad if it doesn't.