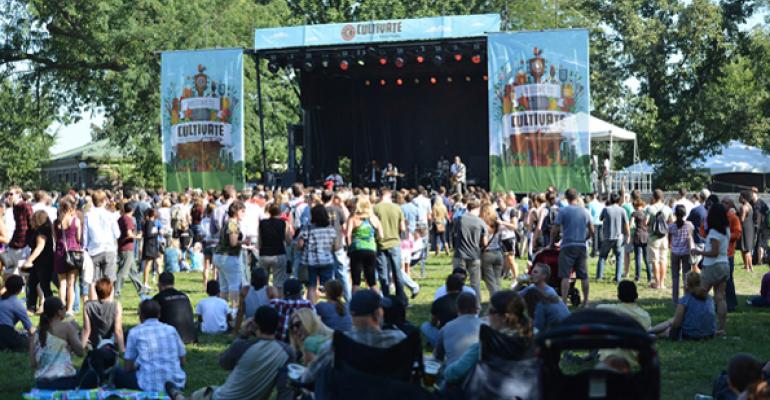 <p> Chipotle is expanding its Cultivate festival to three cities this year.</p>
Trends

Not enough cash for Coachella? Too busted for Bonnaroo? Can’t score tickets for Food & Wine in Aspen? Burning Man a little too wild and crazy for you? No problem. This year, fast casual burrito king Chipotle Mexican Grill is expanding its lineup of free one-day “Cultivate” festivals to include three cities—Chicago, Denver and San Francisco. The main attractions: an all-star crew of celebrity chefs, plenty of cool indie bands and lots of sustainably sourced food and drink.  As restaurant brand promotions go, this one’s hard to beat.

Chipotle, now up to 1,450 stores, put on its first Cultivate festival in Chicago in 2011. That event repeated last year and the company added a second Cultivate in San Francisco. This year it’s a three-festival series, which gives us an indication of how much marketing payback Chipotle is getting from the Cultivate festivals.

Check out the chef lineup for Cultivate San Francisco, set for June 8 and Golden Gate Park.

A chef lineup like that qualifies as a festival in itself. So would the musical acts. Bands taking the stage in San Francisco include Mayer Hawthorne, The Walkmen, Matt Costa, LP, and Walk the Moon. The chef and band lineups at Denver (Aug. 17 at City Park) and Chicago (Sept. 7 in Lincoln Park) will be slightly different, although no less imposing.

So what does Chipotle get out of these events?

“We are changing the way people think about and eat fast food, and part of that comes from helping people understand how food should be raised and prepared,” says Mark Crumpacker, chief marketing officer at Chipotle. “These events allow us to educate people about how food can be raised responsibly by giving attendees the opportunity to interact with farmers, local artisans and some of the country’s best chefs, all while enjoying some great live music and delicious food.”

Not quite everything will be free. Chipotle will sell special items that don’t appear on its regular menu. The offerings include a grilled flatbread gordito, chicken and Sofritas tacos and a charred esquites (Mexican street corn) salad. Attendees will also be able to check out food that comes from Chipotle’s ShopHouse Southeast Asian Kitchen concept: a jasmine rice bowl with pork and chicken meatballs or organic tofu.

There’s more. Each festival will feature an Artisans’ Hall where locally crafted food items can be sampled and purchased. A Brewers’ Hall will offer local and specialty beers and wines at each festival location. One of the beers available will be “Cultivate Farmhouse Ale,” a Saison-style beer produced by a local brewer in each Cultivate city.

Interactive sustainable food experiences sponsored by foodservice industry purveyors will give attendees even more to do.

It’s a well-thought out promotion of a size and scope few other restaurant chains can imagine, let alone pull off. Only bad weather could keep these events from being overwhelming successes.