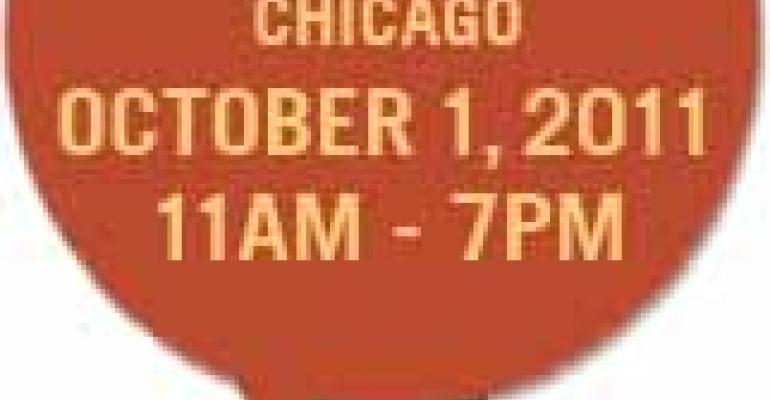 Cultivate Chicago, a day-long festival that will offer the unusual combination of indie bands, artisanal food and wine producers, craft brewers and high-profile chefs in an outdoor setting, is the brainchild of Chipotle Mexican Grill. We’re all for brand positioning, but does it really take all this to sell fast casual Mexican food these days?

Throw in the fact that admission is free and this combination of music, food and drink, all centrally located in an easily accessible park in a major city, and you know the venue will be packed. These elements make for a terrific festival in their own right, one people would be willing to pay a lot of money to attend.

But Chipotle is delivering even more, and they’re aiming right at the heart of Chicago’s foodie demographic with it.

As a fast casual taco/burrito chain whose menu is unchanging, Chipotle is anything but chef-driven. Yet it’s bringing in a small army of high-profile chefs to entertain the crowds on its behalf at Cultivate Chicago.

But it’s the inclusion of three additional chefs, each a Chipotle employee, that really caught our eye.

Many within the restaurant industry were surprised when 2009 James Beard Rising Star Chef Nate Appleman left his job at Pulino’s in New York City late last year and wound up at Chipotle. He brought a lot of culinary firepower to bear on what is essentially a high-volume burrito-rolling operation. Why, people wondered, did Chipotle need him?

Appleman will be cooking for Chipotle at Cultivate Chicago. So will another Chipotle in-house chef, Kyle Connaughton. Before joining Chipotle earlier this year, Connaughton worked in England as head developmental chef for The Fat Duck Experimental Kitchen. Located in Bray, England, The Fat Duck holds three Michelin stars and is routinely ranked as one of the top two restaurants in the world. A third well-credentialed Chipotle chef, Joel Holland (Spago, Nobu, Restaurant Terroir), a 2010 hire, will show of his skills in Chicago, too.

Wonder what these guys have been brewing up in the company’s R&D lab? We’ll soon find out. Chipotle says its culinary crew has come up with four new items just for Cultivate Chicago:

This mini menu gives Chipotle fans a chance to sample some of the chain’s familiar ingredients that have been incorporated into new dishes. These items, however, won’t be free. The revenue generated from their sales will go to Family Farmed.org, which supports artisan food growers in Illinois.

So what else have these three Chipotle chefs been up to? We’ll probably find out more when Chipotle debuts its ShopHouse Southeast Asian Kitchen concept in Washington, DC. ShopHouse was supposed to open this summer, so it’s running a little bit behind schedule. But given the caliber of chefs Chipotle has working on this project, it could be worth the wait.

Chipotle indicates it may host similar versions of the Cultivate Chicago event in other cities in the future. Given the chain’s massive customer base, we think it would draw huge crowds no matter where it went.