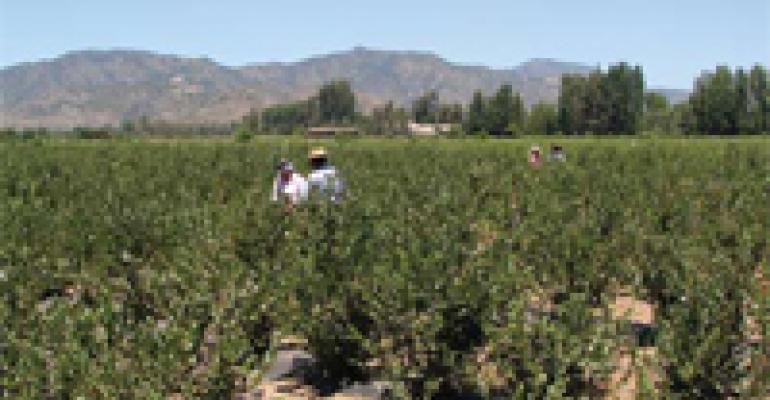 There's a reason so much more produce seems to come from Chile these days: Chile's mild, sunny climate and geography closely mirror another global agricultural powerhouse — California. And, thanks to its south-of-the-equator location, Chile's seasons are the flip side of its northern hemisphere counterpart, so similar crops are being harvested there just when they are out of season here. Thanks to a 2,600-mile length and two natural barriers to insects and disease (mountains on one side and ocean on the other), Chile enjoys diverse climates and a huge variety of crops.

As a result, and with the help of modernized harvesting and shipping procedures, chefs in the U.S. have ready access to an embarrassment of produce riches — especially fruits — year-round.

More than 7,800 Chilean growers supply some 75 species of fruit to 100-plus countries. During the 2006-2007 season, nearly 2.5 million tons of fresh fruit was exported, nearly 11 percent more than the season before. The lion's share of that went to the U.S., and Europe. By far the biggest crops sold abroad are table grapes and apples; in the U.S., avocados are also popular. Worldwide, Chile is the top exporter of table grapes and plums and the second largest provider of avocados.

Besides Pacific-caught seafoods and high-quality wine's from the country's 500-mile-long wine region, Chileans' diet incorporates much of what the field produce in traditional fare such as pastel de choclo (a corn casserole), cazuelo (clear broth with rice, potatoes, corn and chicken or beef), empanadas and ave paldas (chicken and avocado sandwiches).

But Chileans like to joke that the best produce is sent overseas. In fact, about two-thirds of the fruit produced in Chile is exported. The authorities are fully aware of the stakes and have taken steps to ensure quality.

On a recent visit by a group of journalists, chefs and distributors, the breadth of products and the commitment to food safety were evident. Probably the clearest evidence of the country's commitment is the Chilean Good Agricultural Practices Program (ChileGAP), a voluntary program designed to ensure safe food handling, environmental protection and workers' and consumers' health, safety and welfare. It also takes into account the food safety standards set by other countries where Chilean products are exported.

As a result, at the field level, ChileGAP ensures that producers adhere to good manufacturing practices, including traceability and standard sanitation operational procedures, and that packing houses follow HACCP procedures.

An example is Hortifrut, one of the larger exporters, which sells berries in the U.S. under the Naturipe Farms brand. The company is able to track a single clamshell package from the orchard to the end consumer through its quality control process.