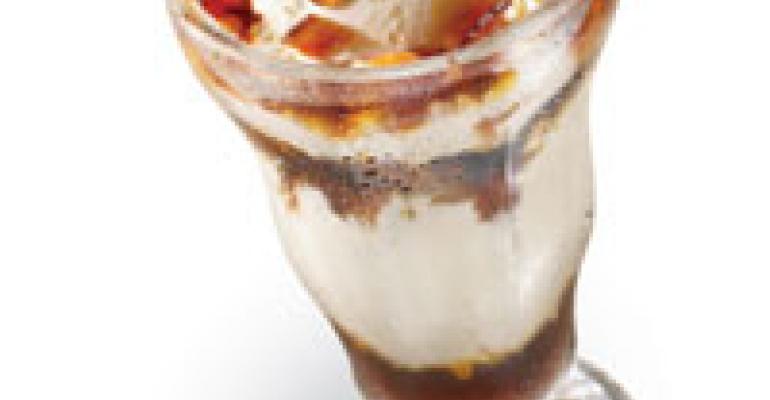 Bacon: The Trend Is Your Friend

When Denny’s starts putting bacon in an ice cream dessert, does it mean the bacon craze is over? Or is it more proof that there’s no better way to boost a menu item’s taste, texture and consumer desirability than to add some bacon to it? Check out soaring pork belly prices before you cast your vote.

Denny’s rolled out no fewer than seven new bacon items in March as part of its “Baconalia” promotion. The lineup includes a BBBLT sandwich (eight strips of bacon!), a Triple Bacon Sampler, the Ultimate Bacon Breakfast, Pepper Bacon with Eggs, Bacon Flapjacks, Bacon Meatloaf and the Maple Bacon Sundae. With 1,600 locations across the U.S., Denny’s is going to go through a whole lot of bacon.

It’s a limited-time offer, for which the company’s purchasing department is breathing a sigh of relief. That’s because the outlook for bacon prices is downright scary.

“Prices for pork bellies, from which bacon is made, are responding to strong demand with analysts and traders predicting bellies will set new, all-time highs this summer of $1.70 to $2.00 a pound,” writes MarketWatch columnist Curt Thacker. The record price is $1.60 per pound, set last September. Right now, pork bellies go for around $1.50 a pound. Last year at this time, the figure was $1.10.

So will rising prices cause demand to drop? We think not. Bacon is an almost magical ingredient, in that just a small amount adds a little texture and an awful lot of flavor wherever it’s used. On a per-portion basis at the restaurant level, any rise in bacon’s cost should be easily contained.

That’s one reason you’ll continue to see so much bacon used in restaurants, particularly in fast food operations. Here’s another: bacon items sell. Agricultural economist Ron Plain told MarketWatch “every time bacon is put on a fast-food sandwich, the result is incremental growth in sales.” No other sandwich add-on has a similar effect, although cheese comes close.

Will bacon feel an effect later this year when calorie counts will be required to be posted on chain restaurant menus? The calorie count for bacon probably isn’t necessarily a deal-breaker—104 calories for 2 average-sized slices. But some of its other nutritional attributes—bacon is very high in fat, particularly in saturated fat, as well as in sodium—might cause a few dietary purists to order something else.

But we doubt that menu labeling will put an end to the baconmania that reigns on U.S. restaurant menus right now. As the NPD Group’s data gatherers point out, 44 percent of U.S. consumers currently eat at least some bacon in every two-week period. That’s a record high, NPD says.

So if you have a menu item you’d like to sell more of, go ahead and figure out a way to add some bacon to it while keeping your food costs in line. This is one trend that has been, and will be, the restaurant operator’s friend.