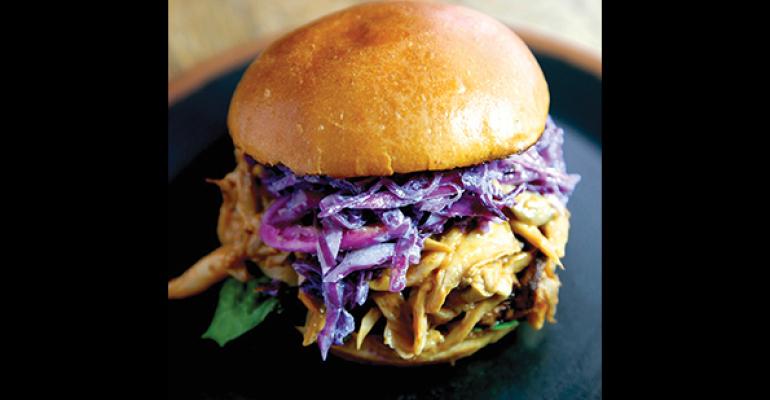 <p>Creative offerings like this Pulled Barbecue Mushroom Sandwich from The Greenhouse Tavern in Cleveland have Millennial appeal.</p>
Food & Drink>Food Trends

According to two recent reports, vegetable-centric sandwiches are gaining traction with consumers, particularly among Millennials. And savvy restaurant operators are taking their cue and figuring out creative ways to incorporate these valued ingredients in their sandwich offerings.

The Culinary Visions Panel explored the sandwich habits, attitudes, preferences and willingness to try new concepts of about 1,000 U.S. consumers. Here’s how their study worked: The panel developed 10 sandwich concepts (shown to participants online), which they dubbed “next generation sandwiches,” to find out how adventurous consumers would be when it comes to trying new sandwich ingredient combinations. The key finding: “Four of the top five sandwich concepts preferred by Millennials were veg-centric in nature,” write the authors.

That doesn’t mean consumers are abandoning proteins. More accurately, they would prefer it if vegetables and proteins swapped their traditional roles, with produce taking center stage, and proteins cast in supporting roles.

“Most of these new menu items use protein sparingly to provide layers of craveable flavor,” writes the Culinary Visions Panel. “The next great sandwich concept could incorporate a unique mix of vegetables, with a protein garnish.”

Sharon Olson, executive director of Culinary Visions Panel says, “We believe [veg-centric sandwiches] have real potential to delight a wide range of customers because some concepts may be vegetarian and yet many include meat as well. I think consumers are telling us they are ready for delicious, flavorful and craveable veg-centric sandwiches."

Millennials are the most enthusiastic about vegetable-based sandwiches, with one-third of the study’s younger respondents saying they would try the panel’s proposed vegetable sandwiches (which contained ingredients like arugula, tomato, avocado, caramelized onion and melted cheese between crispy plantains), while just one-quarter of those aged 35-54 would choose a meat-free option. Salad cones also rated highly with Millennials. The proposed salad-as-a-sandwich concept combined grilled chicken, romaine lettuce, onion, tomato and ranch dressing in cone-shaped brioche. They also responded well to a paleo sandwich with avocado spread, romaine lettuce, peppers, fresh herbs and accents of garlic-marinated shrimp, folded into an almond flour wrap.

One-third of all of the Culinary Visions respondents showed interest in an omelet sandwich, which rated third overall among the 10 concepts tested. It combined spinach, pepper jack cheese, roasted red peppers, and a sprinkling of bacon in an egg wrap.

The Culinary Visions data dovetails with a recently published report from market research firm Packaged Facts. In their “Sandwiches: Culinary Trend Tracking Series” the authors write, “The influence of health trends is evident in growing use of leaner proteins in sandwiches. Leafy veggies also will be getting more play as a sandwich component—sometimes in health-minded ways alongside better-for-you proteins such as lean poultry or egg whites, sometimes in indulgent sandwiches.”

Consumer interest in food sourcing is further driving restaurant sandwich offerings, the company notes. “Leveraging progressive food sourcing and food preparation practices, restaurants and food manufacturers are increasingly focused on providing sandwiches that are fresh, naturally produced, locally sourced, and either culturally authentic or genuinely creative in culinary concept,” write the Packaged Facts authors. “This focus dovetails with two of the most important consumer drivers in the sandwich market, the demands for flavor adventure and authenticity.”

Packaged Facts studied menus and identified types of sandwiches that are gaining traction (or will soon). Particularly interesting is the Garden Tartine. Watch for versions (and invent one for your menu!) of the classic open-faced tartine that feature vegetables “piled onto the bread to create a produce-based (often vegetarian, and potentially vegan) still life of a sandwich,” says Packaged Facts. “Think of this school of tartines as farm-to-slice of bread, the farm-to-table trend translated into carefully landscaped sandwiches.”