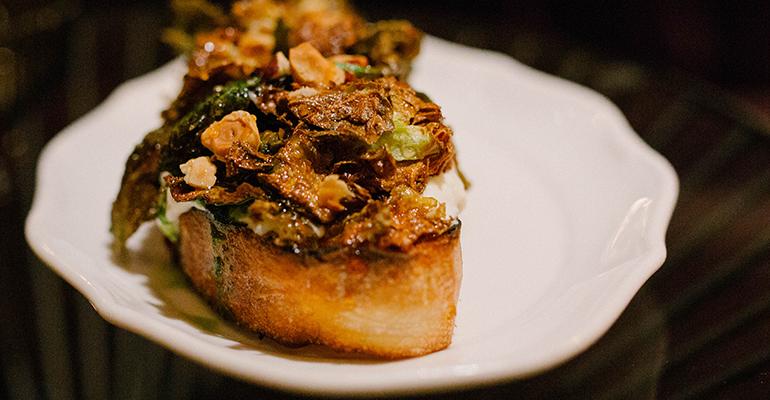 <p>With one-third of Americans likely to choose vegetarian options, it makes sense to menu satisfying meatless offerings, such as this <span class="st">Brussels Sprouts Fett&#39;unta</span> from Nico Osteria in Chicago.</p>
Trends

About one third, or 36 percent, of American consumers eat at least one vegetarian meal per week, indicating “hefty” demand for meat-free meal options but also marking a decline compared with 2012, according to a recent survey by the Vegetarian Resource Group, or VRG.

In a national Harris Poll of about 2,000 adults conducted earlier this year and commissioned by the Baltimore-based resource group, VRG found that 3.4 percent of respondents said they never eat meat, fish or poultry, representing roughly 8 million adults across the U.S.

Of the 3.4 percent of vegetarians in this year’s survey, close to 15 percent said they were vegan and never eat meat, fish, poultry, dairy or eggs, representing an estimated 1 million people across the country.

The 36 percent who said they eat at least one vegetarian meal per week this year, however, marks a decline from a VRG survey conducted in 2012, when 47 percent said the same.

Charles Stahler, VRG co-director, said the survey is somewhat cyclical. “One third of the population is still pretty hefty,” he said.

More vegetarian options are coming to market giving consumers more plant-based alternatives, he noted. “It’s not only because of the 3.4 percent, it’s because of the one-third.”

According to the 2015 survey, when asked how often they eat vegetarian meals, 8 percent said once per week, while 5 percent said they devote one day per week to eating meals free of meat/poultry/fish.

About 10 percent of the population said they eat many vegetarian meals but less than half the time. Another 10 percent said more than half of their meals were vegetarian, but not all the time.

Vegetarians tended to skew slightly female: 3.7 percent who said they were vegetarian were women versus 3 percent men.

The highest percentage of vegetarians (6 percent) were found among adults aged 18 to 34.

The survey also noted that those looking for vegetarian meals may have different needs.

“Food companies and restaurants should note that consumers may be looking for vegan, low-sodium, gluten-free, locally grown, organic, gourmet, kosher or other selections,” the survey said. “If developing a vegetarian product or offering vegetarian meals, they will need to do more research on their customers’ food preferences.”