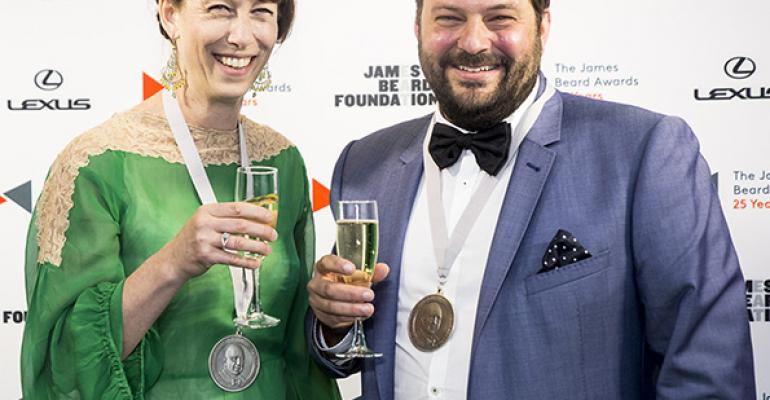 Being nominated for a James Beard award is a huge honor and winning one is the pinnacle of any chef or restaurateur’s career. Yet just two restaurants helmed by 2015 Beard award honorees appear on a list of America’s Top 50 independent restaurants that channels the social media sentiment of 120,000 U.S. consumers. Even the winners of such of-the-moment Beard categories as Best New Restaurant (Batard) or Rising Star Chef (Manresa’s Jessica Largey) couldn’t cross over.

Why so little buzz for Beard? Foodable WebTV Network’s inaugural Top 50 Restaurants in the U.S. report doesn’t generate its numbers by surveying diners or tabulating the votes of a small group of knowledgeable insiders like the Beard Awards judges. Instead, the company draws unsolicited data from 17 social media platforms and massages it to create a proprietary Restaurant Social Media Index. Weston, FL-based Foodable has previously used this method to rank the Top 25 restaurants in key food cities. The new list takes the process national.

Foodable boss Paul Barron says his firm’s approach produces “a list of restaurants that people are actually talking about, dining at and loving, based on their social media behavior. We simply report on our findings, rather than personally deciding which restaurants make the list and in what order.

“We believe that unstructured data on social is more powerful when looking at a ranking of restaurants in a variety of categories, including food, service and overall popularity (engagement),” Barron adds.

You can read about the methodology by accessing a free download of the full report. Note the separate Top 10 Food and Service Sentiment list (winner: barMASA in Las Vegas). There’s also a Top 10 Foodie Popularity Score whose metric is based on how “popular and active foodies engage with top restaurants.” Topping this list is chef Wiley Dufresne’s Alder in New York City. Scores from these two additional metrics were factored in to produce the Top 50 overall list, where Los Angeles restaurant Baco Mercat ranked first.

Dufresne, who received a James Beard Foundation Who’s Who of Food & Beverage in America award this year, was one of two 2015 Beard honorees who also made the Foodable Top 50 list. His new restaurant Alder was seventh overall while his recently shuttered WD-50 ranked 34th.

The other was San Francisco’s State Bird Provisions. Owners Stuart Brioza and Nicole Krasinski were tabbed as 2015‘s Best Chefs: West by Beard, and their restaurant came in third overall in Foodable’s Top 50. It also ranked No. 8 on the Top 10 Foodie Popularity metric.

Factor in a 2013 Beard “Best New Restaurant” honor and its single Michelin star and if you have to name just one restaurant that’s at the very top of its game right now, State Bird Provisions is it. That’s the judgment of the 600 Beard voters, the Michelin inspector who renewed its star and the untold hundreds or thousands who sing its praises on Yelp, Instagram and other social media platforms. Foodable’s Top 50 list may not be definitive, but it does add a valuable and contemporary dimension to any discussion about which restaurants might actually be the best.