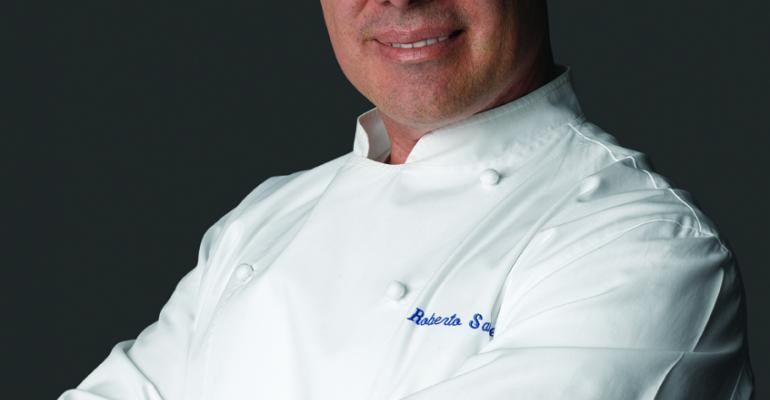 This French-trained chef is creating authentic Mexican cuisine at a level few chefs achieve in this country.

Roberto Santibañez grew up in Mexico City and trained at Le Cordon Bleu before opening several highly acclaimed restaurants in Mexico City, followed by four years as executive chef at Fonda San Miguel in Austin, TX. While there, the Austin Chronicle named him Best Chef and the Austin American-Statesman gave his food five stars. In 2002, he took charge as culinary director for New York City’s Rosa Mexicano restaurants, which Zagat Survey proclaimed the “gold standard for upscale Mexican dining." He opened his own place, Fonda, in 2009. The always-jammed Brooklyn spot serves contemporary, urban Mexican food that you might encounter in Mexico City.  Last year, his latest cookbook, Truly Mexican, landed on the New York Times and Epicurious lists of the best cookbooks of 2011. And in February 2012 he opened a second, larger Fonda in Manhattan’s East Village. We spoke with him about his passion for authenticity.

RH: Your recent cookbook and your consulting company share the name Truly Mexican. What does that mean to you?
Santibañez: It’s not necessarily about keeping all things traditional, but more about how to achieve the right flavors in Mexican cooking. For instance, many people oil their tomatoes before roasting them; we don’t. Everything is about the flavor profile. It’s not necessarily just about keeping the ingredient authentic but the technique authentic. If I see a salsa that looks weird, I can tell it was not made by a Mexican. You need to treat ingredients differently, chop the cilantro differently so it tastes like it would in Mexico and so on. It’s about the spice levels. You should never think “this sauce is made with cumin;” instead, you should say “What is that flavor?” Mexican cooking is about creating flavors that are particular to us.
RH: What ingredients do you import from Mexico, and why?
Santibañez: I think that the chiles are one thing you bring in from Mexico, because the terroir is so important. Chiles that are grown and dried and smoked in Mexico have very different flavors than those grown elsewhere. I especially like finding chile de arbol. All these varieties of Chinese chiles that are sold here look and taste very different.
Avocados are similar. Those that don’t come from Mexico aren’t the same. In Mexico they always grow in the high plains, which means they go through very cold nights. Those nights make the tree develop fruit that has more oils. They also grow in the mountains, where the soil is volcanic and incredibly rich in minerals, which contributes to a more pronounced avocado flavor. The Hass avocados from Mexico have almost an anise flavor in the background.
RH: What do you think about the state of Mexican restaurant food in the U.S.? What do you consider an abomination?
Santibañez: Everybody does a pico de gallo that ends up being a tasteless salad of tomatoes and onions. It should be something so nice. Many chefs never put enough lime juice in it because they are trying to save money. If you’re not going to add  enough lime juice, just don’t do it. But It’s definitely getting better. Those interested in our cooking are reading and researching more and getting more informed.
See Santibañez's recipe for Guacamole Enchiladas with Guajillo-Tomatillo Beef Sauce
RH: You developed menus for Carlos Santana’s Maria Maria and Santana restaurants. What do your consulting clients want help with most?
Santibañez: People will call and say they are having an issue with their food: Maybe their salsas don’t have the right flavor profiles, and they want us to come help us fix them. Clients in Europe want to know how they can create Mexican food with the available resources. We go to the markets, look at the ingredients and see how we can help them produce something closer to Mexican food.
RH: What lessons from Le Cordon Bleu have you applied to your cooking?
Santibañez: What I do is cook Mexican food, but sometimes I add something. I might prepare a special fish with a traditional French sauce, but spice it up. It’s interesting how the two cultures and techniques go so well together. If you take a traditional cream sauce, even a béchamel, and add a little chipotle it tastes delicious. You would find that in urban Mexico, where there are people who have traveled and you see a lot of European influences.
RH: You’re a chef/owner, cookbook author and consultant. How do you manage your time?
Santibañez: In the mornings I sit down, do office stuff, look at e-mails and comments about the restaurants and meet with managers on some days. I attend some of the preshift meetings at the restaurants. In the afternoons and evenings I get together with my cookbook cowriter and we test recipes when we can. Sometimes I travel a lot, which takes me off the job a little, but I look at the travel time as a positive because I can really write and correct recipes and get the books done.
Truly Mexican has been really successful, so the publisher asked us to do another cookbook. At the moment we’re testing a new recipe for flour tortillas, but the flours don’t work. We need a harder flour—so I’m going to try bread flour. The focus of this book is also urban Mexican cooking, with everyday foods like tortas and tamales that urban Mexicans eat.
TAGS: Owners Chefs
0 comments
Hide comments
Recommended Reading