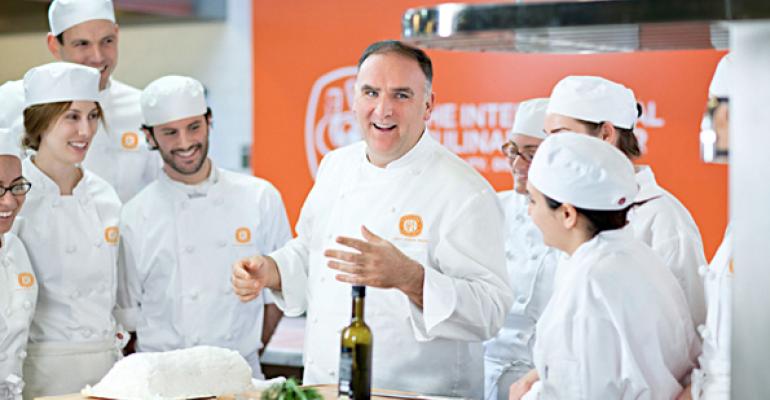 <p>Andr&eacute;s is a chef on a mission to feed peoples&rsquo; bellies and their minds.</p>
People

He’s a madman. He’s a genius. He’s a mad culinary genius who’s obsessed with all things relating to food. If you’ve got a question about food, José Andrés has an answer. If you need an opinion about a food subject, he’s got more than you’ll ever need. And once you’ve worked through his Spanish accent, you’ll realize that Andrés is usually right and always hilarious.

So, who better to offer advice and life lessons to the grads of George Washington University? After all, he does teach a course at GWU called The World on a Plate: How Food Shapes Civilizations. For Andrés, the James Beard Foundation’s 2011 Outstanding Chef, no matter where you go in life, even out of this world, food is going to be involved somehow. (He’s consulted with NASA on how to feed astronauts on future missions to Mars.)

Andrés and his Washington, DC-based ThinkFoodGroup have introduced dozens of restaurants around that country that have taught Americans about the joys of Spanish food and the thrills of molecular gastronomy. (He also contributes to a course—Science and Cooking—at the Harvard School of Engineering and Applied Sciences.) Andrés is a chef on a mission to feed peoples’ bellies and their minds.

Here’s a video of his commencement address, along with a fun video he showed to the graduating class.