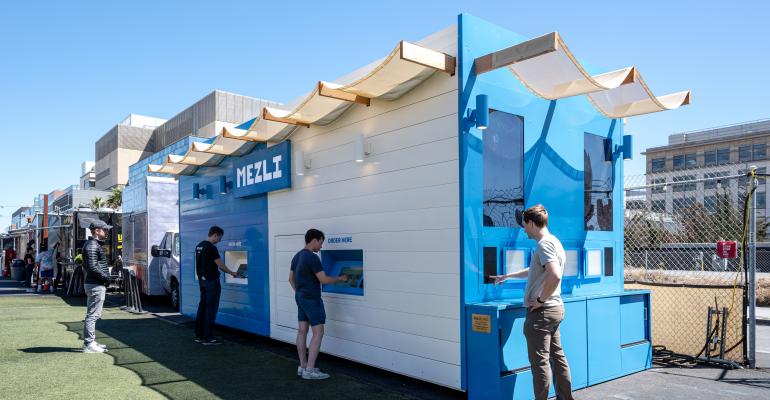 Is this the world’s first completely automated restaurant?

Whether you call it the next generation of the automat or “that robot restaurant with the hummus bowls,” Mezli is claiming to be the world’s first fully automated restaurant and it likely won’t be the last.

The San Francisco-based to-go kitchen pod was invented by Stanford engineers and unlike many other restaurant robots, Mezli’s automation system can do it all without (much) intervention by humans. Mezli’s in-house chef Eric Minnich created the menu of healthy, Mediterranean bowls, and every day, his team preps and partially cooks the ingredients at a commissary kitchen and drops them off at the blue-and-white pod restaurant before it opens for the day.

Related: ‘We’re in the age of convergence:’ How robots, AI, and augmented reality are taking over the (food) world

“We realized that by having a culinary team in house, we could actually build the menu around the robot and the robot around the menu at the same time,” Alex Kolchinski, CEO and founder of Mezli said. “[…] When Apple came out with the iPhone, they didn't just buy an off the shelf phone and put their software on it, they actually developed everything all the way down to the chips themselves. We’re taking the same perspective: when we do things end to end, it actually comes out much better.”

Kolchinski said that while he might understand the inclination to liken Mezli to an automat, unlike the mid-20th century automat, there are no humans behind the scenes on-site making the magic happen. Instead, here’s how Mezli: a customer walks up to the touchscreen to place their order. Then, the robotic technology can assemble the bowl a customer selects by heating up refrigerated ingredients (that have been cooked most of the way by Chef Eric’s team); adding sauces, toppings and garnishes; and then placing the order into a smart locker for the customer to pick up, along with any side dishes and drinks.

The menu is a pretty simple one of Mediterranean-style grain bowls containing ingredients like chicken, lamb, hummus, and Israeli salad, as well as side dishes like pita chips and tahini cookies.

“You might think of it as kind of a miniature assembly line for food run by robots,” Kolchinski said. “It's a pretty simple process but getting it to come out with the right quality of food and the right consistency so nothing goes wrong, that’s the hard part.”

The biggest benefit to running a robot restaurant is of course the cost-saving opportunities. According to Kolchinski, right now, a buildout of one Mezli location is about half of what it takes to build a Chipotle, for example. Plus, they don’t need to have many people on staff to run the restaurant: just people to prep, stock, and clean out the kitchen daily. Overall, he says Mezli’s investment costs are “about a fraction” of their competitors in the industry.

Although right now they just have one location, Kolchinski said he envisions opening multiple Mezlis in major metropolitan areas around the country, with one commissary kitchen in each market to act as a hub and spoke model for every 50 locations. For now, the team will be focusing on this menu with the healthy grain bowls but “never say never” to experimentation with robot-served Mexican or Korean bowls.

“I think there's a big need for this right now, especially with the labor shortage” Kolchinski said. “[…] As far as I know, we are the first restaurant to be fully autonomous and to serve up a menu without human intervention. I do think that once the industry realizes how well this model works, that other people will follow in our footsteps.”