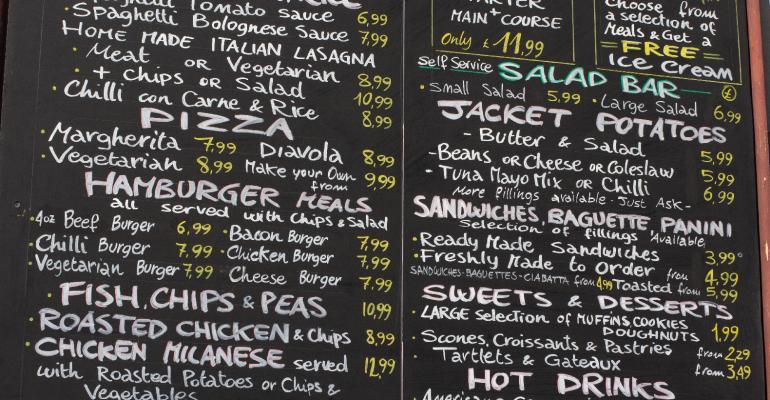 Moonstone Images / iStock / Getty Images Plus
Dynamic pricing is finally making its way into the restaurant industry as operators look for ways to maximize margins in an inflationary environment.
Operations>Technology

A shift to digital ordering combined with higher food costs has led more restaurants to adopt dynamic pricing technology in the past two years.

The concept of dynamic pricing is nothing new. Hotel chains, sports venues, airlines, even utility companies have been adjusting prices for years based on demand and timing.

Dynamic pricing has made it hard to understand the true market value and has gotten a bad rap at times, but it doesn’t just mean increasing prices. It can also mean lowering prices to trigger traffic at slow times. This is where an opportunity exists for the restaurant industry, which has been slow to the dynamic pricing game. During the Restaurant Finance and Development Conference in Las Vegas last week, a panel discussed the benefits and risks of dynamic pricing, noting there is demand for this as operators navigate an unprecedented inflationary environment. Ashwin Kamlani co-founded Juicer last year after nearly two decades in the hotel space because he believed there was a huge opportunity to bring the idea into restaurants now that the business is more digital. He thought there would initially be pushback, but that has not been the case.

“On the contrary, the timing was perfect because inflation is hurting the industry, as are labor prices. And, we’re seeing price dynamism becoming more popular throughout other industries while the customer is getting more and more familiar with this idea,” he said.

.Juicer is still in its proof-of-concept phase, but already has 10 restaurant groups with 4,000 units on its platform. There are also paid contracts into the first quarter of 2023 with another 400 units. He said the technology costs about $200 to $400 a month. Colin Webb, co-founder and CEO of Sauce Pricing, which was founded in 2020, said his platform charges about the same. Both noted that dynamic pricing has become such an effective tool to manage high prices and short labor that the return comes quickly.

Faizan Khan, a Dog Haus franchisee, was an early adopter of dynamic pricing methods and implemented the practice into his virtual brands. He said it has yielded a 10-to-15-times return.

“For us it was all about consumer reaction. The concern was if you’re going to raise prices, you’re going to sell less product and it turns out that really wasn’t the case,” Khan said. “I think there’s a lot of room for consumers in terms of price amounts they’re going to accept. Generationally, I think we’re seeing this being acceptable.”

Kamlani said that’s because other industries have normalized dynamic pricing and, in the restaurant space, that includes the likes of DoorDash and UberEats. Still, the restaurant industry is notoriously slow when it comes to tech adoptions and that remains the case here. Kamlani said seamless integration is the key for swift adoption. The industry isn’t there yet, but it’s moving in that direction. As that movement happens, there are some things to refine. Khan said he has added an easier interface, for instance, and recently introduced a breakfast burrito campaign for his virtual brands to generate volumes during a slower period. So far, Dog Haus has found a dynamic pricing sweet spot by increasing percentage of online sales versus in-store sales to maximize margins.

“The whole idea is to leverage machine learning models to understand when to apply correct pricing based on demand – filling in slower time periods and increasing prices during peak hours to maximize profit and ease the burden on the kitchen,” he said.

As more restaurants adopt a dynamic pricing mindset, Kamlani and Webb expect smarter applications; for example, adjusting prices based on weather or time of day or region.

“We’re not talking about doubling or tripling prices. This is about using data to make smarter decisions about pricing,” Kamlani said.

Webb added that it’s also giving consumers more control over what they’re willing to pay and when.

“Rather than increasing prices blanketly across the board, the next time costs rise maybe they only increase prices on particular days of the week or particular hours of the day. So you can still offer lower price points that drive consumers in, but still take great care of your margins,” he said.

The keys to successful implementation are integration with point-of-sale technology and ensuring the customer experience isn’t compromised. For example, triggering lower prices will ideally increase volumes but shouldn't affect speed of service. Kamlani said it’s up to the tech companies to ensure seamlessness as restaurants simply don’t have the resources to manage the platforms or the data that drives the pricing.

“In order for this to become a reality, it requires a lot of collaboration. How do we make that happen? Because it’s good for everybody,” he said. “And there’s not a lot of (consumer) pushback because (pricing) is a reality for the consumer. As long as it’s done well – balancing the preservation of loyalty and customer experience with the opportunity to attract more profit – it can be done.”