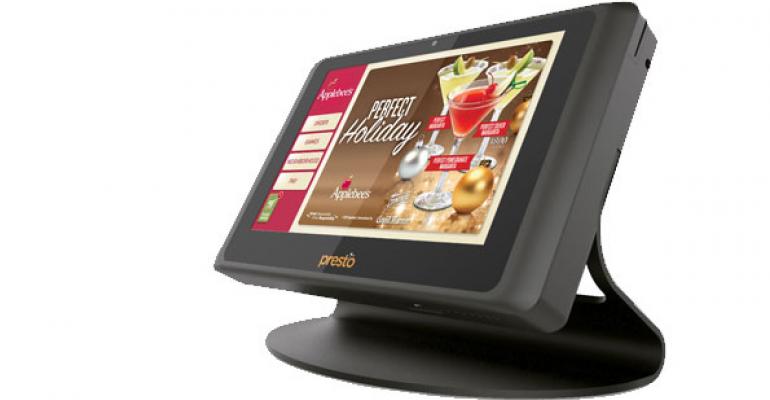 <p>In a recent test at 18 Genghis Grill locations, tabletop tablets increased table turns 30 percent, more that one-third of all guests paid via tablet and servers benefitted from a 16-percent bump in tips.</p>

One hurdle when introducing technology into restaurant operations is overcoming the stigma that technology will replace jobs. No one wants to be that employer putting people out of work to save a buck or two.

Slowly but surely, however, restaurateurs are beginning to understand the benefits of putting technology in their employees’ hands as well as their guests’ hands. In a recent survey of 1,926 adults conducted by Software Advice, 54 percent of respondents said they would use a self-service POS system for ordering or paying. The most intriguing features, according to survey respondents, are the ability to customize orders, the ability to view pictures of menu items and the ability to split the bill and use multiple payment types.

For Genghis Grill, a build-your-own stir-fry chain with about 100 stores, new-age technology was never looked at as a tool to help decrease labor. It simply aids in the operations process. Now that Genghis Grill has added tabletop tablets to the majority of its stores, servers can handle eight or nine tables at a time rather than two or three, says Marcin Kedzierski, IT director for the chain.

Before the tablets were installed, Genghis Grill executives noticed many lunch guests were bypassing the stir-fry concept because they had limited time before they had to be back in the office. The full-service nature of Genghis Grill meant longer wait times. Adding a tablet where diners could order and customize their meal on their own schedule increased the amount of people who not only perceive the concept as quicker but actually increased table-turn times as well.

Analyzing data generated across 18 stores over an eight-week period, table turns increased by more than 30 percent, Kedzierski says. In addition, when given the opportunity, more that one-third of all guests paid via tablet, and servers benefitted from a 16-percent bump in tips.

Another goal Genghis Grill was hoping to meet with the installation was a more interactive dining experience for families. In addition to a full menu and ordering software, the Presto systems include games, which were an immediate hit with kids. In addition, guests can sign up for the loyalty program and see what they’ve ordered on prior visits. The tablets tie into the restaurant’s AV systems so guests can play music they want to hear.

Lastly, the tablets provided Genghis Grill the ability to market directly to consumers, replacing or enhancing spiels servers were asked to deliver to their guests. It’s a direct connection with the consumer that doesn’t require printing table tents, Kedzierski says.

Rollout at Genghis Grill has been relatively smooth. The company opted for freestanding tablets rather than embedding something into the table because they wanted to appease the customer who wasn’t interested and wanted to move them out of the way. Although guests can pick the tablet up and move it around, Genghis Grill hasn’t had issues with theft. “Outside of the store they are bricks,” Kedzierski says. “They only work where they are supposed to work.”

Training was the biggest challenge. Kedzierski says the company needed to change management’s thinking, convincing franchisees and operators that the tablets are something that will help with their job rather than put it in jeopardy. They’re put through a rigorous training process. Integrating a new technology system into a current POS system can be difficult as well.

To get a better glimpse of return on their investment, Genghis Grill has been running several tests. In a Dallas store, management compared check start times and close times, which showed a 32-percent decrease in time spent in the restaurant. Lunch times dropped from 37 to 25 minutes, “which means we can have more people in the store at the same time,” Kedzierski says, “and it gives the guest a few additional minutes to run their errands.”