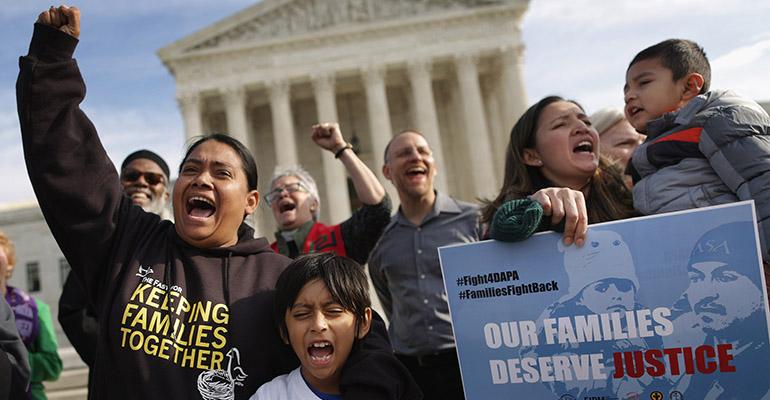 <p>Earlier this year, the Fair Immigration Reform Movement (FIRM) and CASA, organized a prayer protest outside the Supreme Court.</p>
Operations>Staffing

Where the presidential candidates stand on immigration

As the country gears up for the 2016 presidential election, the remaining candidates’ positions on immigration are becoming more crystallized.

Here’s what each of the remaining candidates has to say about the issues with the most potential impact on the industry:

With regard to the President’s executive actions, which provide employment authorization and relief from deportation to approximately half of the undocumented population, the National Restaurant Association supports DACA (Deferred Action for Childhood Arrivals) but has not taken an official position on DAPA (Deferred Action for Parents of Americans and Lawful Permanent Residents). Overall, the association believes that continuing to skirt Congress makes it more difficult to find a permanent solution to the problem of undocumented workers.

Republican Donald Trump proposes a mass deportation of all 11 million undocumented workers. Celebrity chef/TV personality Anthony Bourdain has alleged that "every restaurant in America would shut down" were that to happen (although others have suggested that’s an exaggeration). Separately, Trump wants to eliminate birthright citizenship for children of the undocumented.

The National Restaurant Association supports a “simple, reliable federal verification” system that would relieve restaurants from complying with a complex maze of disparate state regulations. A few prominent restaurateurs (Danny Meyer and Wolfgang Puck) have also embraced the system. Overall, though, only about 20 percent of restaurants are currently using e-Verify, and critics point to the system’s error rate (i.e. the possibility of erroneously finding someone ineligible to work).  E-Verify recently came to widespread attention when Philadelphia's Vetri Family Restaurants were acquired by Urban Outfitters and its employees were subjected to e-Verify screening, resulting in the abrupt termination of 30 workers.

Clinton and Sanders have not expressed a public opinion on this topic.

NRA favors strong border security that does not restrict legitimate tourism and travel, a substantial economic driver for the restaurant industry.

While he believes that border security is important for the country, Sanders does not support a fence as the way to achieve that security. He has criticized “the militarization of our border communities,” particularly along the U.S. border with Mexico. He wants to focus on efficient security technologies such as thermal cameras and motion sensors, rather than border fencing; he also wants to hold Customs and Border Protection agents more accountable, especially regarding the use of force.

In March Clinton praised President George W. Bush’s and President Obama’s improvements to border security, including several hundred miles of fencing, which she stated have cut net migration of the undocumented from Mexico to zero. She suggested that the federal government should now turn its attention to trying to legalize undocumented immigrants.

Trump wants to expand fencing and increase aerial surveillance and border patrols. He proposes banning Muslims from entering the U.S.  Trump’s positions on immigration, including border enforcement, have gotten him into hot water with a number of leading restaurateurs including Jose Andres and Geoffrey Zakarian. They and other chefs have backed out of restaurant deals with the candidate, claiming that Trump’s statements calling undocumented migrants rapists and criminals made it impossible for them to hire staff and would make it difficult to attract customers once the restaurants opened.

As the presidential race continues to heat up in the coming months, we can expect more light to be shed on the candidates’ positions on these critical issues. In particular, we hope the candidates will speak more specifically on the issue of e-Verify, something that has long been at the top of the industry’s agenda. For the nation’s more than 14 million restaurant employees, 10 percent of whom are immigrants and many of whom are undocumented, the resolution of these issues will have a substantial impact on their daily lives as well as their and their families’ futures.

Becki Young, cofounder of Hammond Young Immigration Law and head of the firm's hospitality practice, is a seasoned business immigration attorney with 20 years of experience in the field. She has facilitated the sponsorship of foreign professionals, trainees, interns and individuals of "extraordinary ability" in finding employment in the hospitality industry in the U.S.