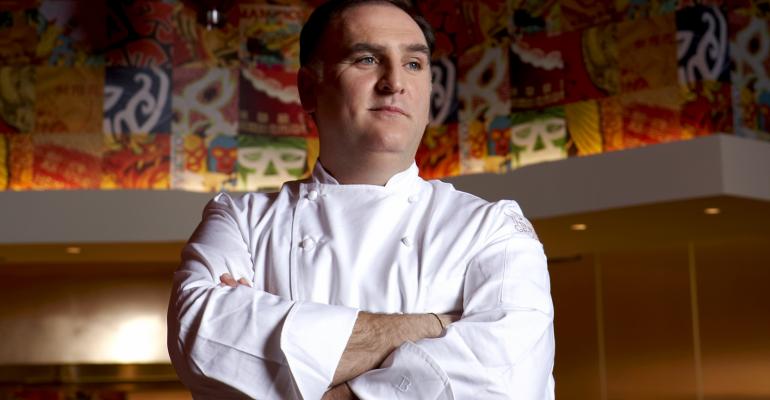 <p>Jos&eacute; Andr&eacute;s backed away from his part in the Washington DC Trump International Hotel project over comments made by Donald Trump.</p>
People

With at least two prominent chefs publicly pulling out of a redevelopment project by Republican Presidential hopeful Donald Trump, some in the industry are wondering whether the controversial real estate mogul’s days of restaurant partnerships are over.

Trump in a June 16 speech referred to Mexican immigrants as criminals, drug traffickers and rapists. The comments sparked a “Dump Trump” movement, with a number of brands and corporate partners cutting their ties with the candidate and his properties.

Last week, celebrated chef José Andrés, owner of Washington-based multiconcept operation ThinkFoodGroup, pulled out of the project, a $200 million renovation of the historic Old Post Office building, which will become a 270-room Trump International Hotel. The to-be-named restaurant, announced in January, was to anchor the hotel lobby, and ThinkFoodGroup was also handling food and beverage for the lobby bar and banquets.

In a statement, Andrés said Trump’s comments disparaging immigrants “make it impossible for my company and me to move forward with opening a successful Spanish restaurant” planned for the hotel.

“More than half of my team is Hispanic, as are many of our guests,” he continued. “And, as a proud Spanish immigrant and recently naturalized American citizen myself, I believe that every human being deserves respect, regardless of immigration status.”

A few days later, Food Network star Geoffrey Zakarian, chef and partner of The Lambs Club and culinary director of The Plaza Hotel, both in NYC, withdrew plans to open a second location of his brasserie concept The National in the Trump International project.

“The recent statements surrounding Mexican immigrants by Donald Trump do not in any way align with my personal core values,” said Zakarian in a statement. “In light of this, I am unable to move forward with a restaurant in the Trump International Hotel, slated to open in Washington, D.C.’s Federal Post Office building. Zakarian Hospitality employs many immigrants from nations all over the world, and I look forward to continuing this business culture in my future restaurants.

“We are a nation built from immigrants, my family included,” said Zakarian, who is of Armenian and Polish descent.

A Trump spokesman told the Washington Post that Zakarian had put up a nonrefundable $490,000 deposit and Trump’s son, Donald Trump Jr., threatened to seek 10 years’ worth of unpaid rent, attorney’s fees and other damages from Andrés.

If the dispute does end up in court, NYC-based restaurant consultant Clark Wolf says the restaurant operators may have an argument that it was Trump who changed the equation.

“If you have a very visible brand that has a positive value, and you make a deal, and suddenly that value becomes negative—then that deal has a negative impact. It’s simple arithmetic,” Wolf adds. “Trump’s name was a draw, and now it’s a negative. They could add up every business deal he has lost and say these are companies or guests that are not likely to come to our restaurants because of him.”

Smaller restaurateurs with one or two units might be more controllable. But big-name chefs with multiple locations all over the world have a fiduciary responsibility to their backers, Wolf observes. “They can’t put those investments at risk.”

Attorneys, however, say such contracts don’t typically include any standard clause that would give a restaurant operator a way out when partnerships sour.

“It really depends on the contract and who wrote it,” says Carla Seidel, legal associate with Caruso Affiliated, the L.A.-based real estate development company with a number of high-profile retail, residential and hotel properties, including the Rosewood Miramar Beach Hotel in Montecito, CA, under construction.

Sponsor agreements, like those with a celebrity brand ambassador, would allow a restaurant operator to back out of a deal because of seemingly inflammatory comments directed against a racial, gender, religious or ethnic group, Seidel observes.

“That being said, I have never seen such a provision in a lease agreement,” she adds. “While Trump’s remarks may have been offensive, they would most likely not provide legal grounds for terminating a lease.”

Other corporate partners reportedly have also distanced themselves from Trump, including NBC Universal, which partnered with Trump on the Miss Universe and Miss USA pageants. ESPN moved its charity golf tournament from a Trump-owned property; and the PGA of America said it will not hold the Grand Slam of Golf tournament at Trump National in Los Angeles. Department store Macy’s is phasing out Trump’s menswear line.

In Washington on Friday, lawmakers and protesters at the Trump construction site called for a broader boycott of Trump’s businesses and products. In California, Democratic lawmakers reportedly pushed a resolution urging the state sever ties with Trump-affiliated entities.

But Wolf speculates that it may be difficult to recruit known chefs going forward, both at the Trump project in Washington and in other properties.

“The challenge for us is that we’re in the hospitality industry. We’re in the business of bringing people together and making people feel good and comfortable,” says Wolf.

But, he adds, “I understand Paula Deen is available.”