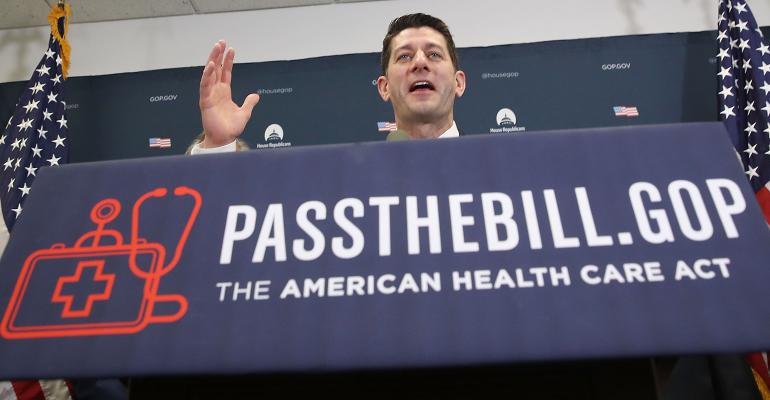 The National Restaurant Association voiced its support for the Republican plan to reform the Affordable Care Act on Wednesday, calling it an “important first step” in reducing employers’ health care costs.

“Costly compliance issues, a shrinking risk pool and higher healthcare costs have made the current structure of ACA untenable for restaurants,” Cicely Simpson, executive vice president of policy and government for the association, wrote in a letter to House Speaker Paul Ryan. “We support passage of the American Health Care Act as a way to move us forward in reforming the employer mandate and encourage members of Congress to support this bill through Congress.”

The Republicans’ American Health Care Act, or AHCA, would repeal the tax penalty on large employers that do not provide coverage, and would make the repeal retroactive to Jan. 1, 2016. The bill would also repeal tax credits for low-wage, small employers with 25 of fewer employees that credit up to 50 percent of the employer’s premium contribution.

Details of the changes the Republicans’ plan would make to the ACA can be found on the Kaiser Family Foundation website.

The AHCA has run into difficulties in Congress, among Democrats who strongly oppose it and from some Republicans.

But employers, eager to ease regulations increased under the Affordable Care Act, have been pushing to get the law passed. And earlier this week, the U.S. Chamber of Commerce lent its backing to the reform proposal. The National Retail Federation also supports the AHCA.

Restaurants have been a vocal opponent of the ACA, particularly the employer coverage mandate and the definition of full-time work as 30 hours per week.

The industry is one of the largest private employers, with nearly 15 million workers. Many of the jobs it provides are low-wage, low-skill and often part time. Health insurance requirements have driven up costs for operators, complicating efforts to keep prices down.

“Restaurant operators who can provide health insurance benefits to their employees often find these benefits to be critical tools in recruiting and retaining employees,” Simpson wrote. “However, since the enactment of the ACA and the law’s employer mandate, restaurants have spent hundreds of additional administrative hours managing and delivering these benefits. The added time, money and resources have not improved the quality of health insurance benefits restaurants offer their employees.”

In addition, health care costs have risen “much faster than restaurant sales in recent years.”

“This indicates that health insurance costs are taking up a larger share of the restaurant dollar,” Simpson said.

While the association is backing the AHCA, it made clear that it wants further steps taken down the line.

“Once this initial phase is complete, we look forward to working with you on additional fixes that are needed, including repealing the 30-hour rule, streamlining the employer insurance reporting requirements and repealing the seasonal worker definition,” Simpson wrote.