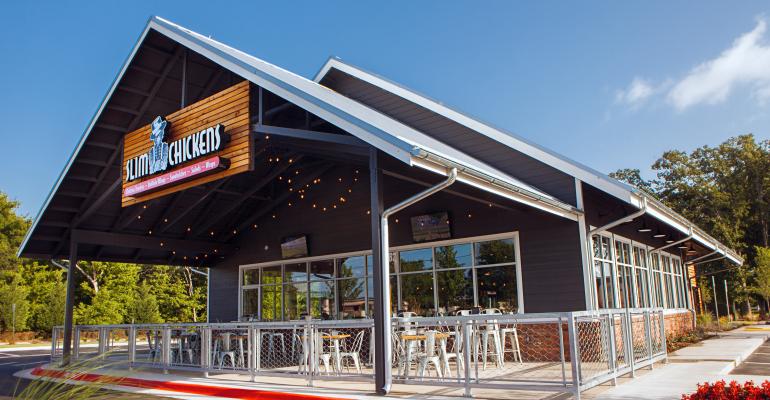 Chicken so good it changes your life

When entrepreneurs Greg Smart and Tom Gordon opened their first Slim Chickens restaurant in Fayetteville, Arkansas in 2003, they set out to make better chicken in a category that included such veteran players as Chick-fil-A and KFC. But when they overheard a customer say their chicken was changing his life, the duo say they embarked on an even bigger mission: to change lives, one hand-breaded chicken tender at a time.

That kind of bigger, better thinking has paid off for the Southern style, fast casual chicken chain. In 2015 Slim Chickens posted three consecutive years of double-digit positive comp sales growth, and now has 46 units — 21 company owned and 25 franchised. The ambitious chicken brand expects to continue its upward trajectory and hopes to reach 600 units and $1 billion in sales in the next decade.

Slim Chickens stands apart from its competition because of its Southern style menu featuring fresh hand-breaded fried chicken tenders and chicken wings, chicken and waffles, as well as wraps, salads and grilled chicken sandwiches. Another point of differentiation is the chain’s scratch made sauces, which can be used to toss the chicken in or for dipping.

The chain has also created innovative products that few other chicken chains are offering, including the new Cayenne Ranch Chicken Sandwich, made with a buttermilk marinated,  hand-breaded chicken breast topped with a spicy cayenne ranch dressing,  Southern style  onion strips, lettuce and pickles on a bun. Launched in September, the sandwich — which is seen as being a notch up from the chain’s chicken tenders sandwich  — has already exceeded sales expectations. Other unique products include Chicken and Waffles, featuring chicken tenders served atop waffles shaped like Texas (in locations in the Lone Star state) or stamped with the Razorbacks logo (in Arkansas). It also offers Jar Desserts, sweet, parfait-like meal-enders served in resealable Mason jars.

“[We differentiate by] thinking bigger, being more innovative. We don’t just do the expected,” says Mears.

Also helping to differentiate the chain is its heavy investment in using design and décor to create an inviting atmosphere at each location. For example, some stores feature elements of an old Southern home or barn architecture, such as pitched roofs with exposed truss work, whitewashed wooden walls and outdoor patios. In addition, its wall décor includes customized murals which reflect the store’s locale and an array of guitars. To complete the down-home experience, Delta blues music plays in each location.

The chain also prides itself on offering service that is a cut above many of its quick service and fast casual competitors by delivering meals to tables after customers order at a counter.

“We really are Southern at heart,” says Mears. “The minute you walk in, you’re welcomed with good old-fashioned hospitality, as if you were a guest in our own home.”

But for the Slim Chickens team it’s also about something greater than creating craveable food and elevated eating experiences. Slim Chickens is also trying to touch the lives of customers who work to protect or save lives in the community. Currently, the chain has a program offering 10 percent off orders for military personnel, and any item for $6 for first responders like police officers, fire fighters and EMTs. To exert an even greater impact, the chain is now working on a single offer that would encompass an even broader range of “life changers” including, for example, teachers.

“[We’re] trying to be life changers in the community,” says Mears. “It’s both give and take.”

The chain has certainly changed the life of Greg McKay, the first Slim Chickens franchisee and now president of BBL Holdings, LLC, which owns and operates three Slim Chickens locations in Texas with a fourth set to open in early January.

“I love the concept, the Southern heart, the blues theme, the hospitality,” says McKay. “My background was zero restaurant experience. I’m pretty fortunate that they took a chance on me. I took a chance on them, too.”

A native of south Arkansas, McKay first heard about the chicken chain back in 2007 from his daughter who was at the time attending college in Fayetteville. After his first taste of the food at “Slims,” as his daughter and her friends call the chain, McKay was ready to trade in his nearly three-decade-long career in construction for one in chicken. While Slim Chickens wasn’t ready to franchise at the time, when they finally entered the franchise arena five years later McKay became a franchisee, opening his first store in Texarkana, Texas, in 2012. Six months later he gave up his day job.

“It’s been a great move,” says McKay. ”It got my family involved. We’ve been able to make good money. It’s something we can build on.”