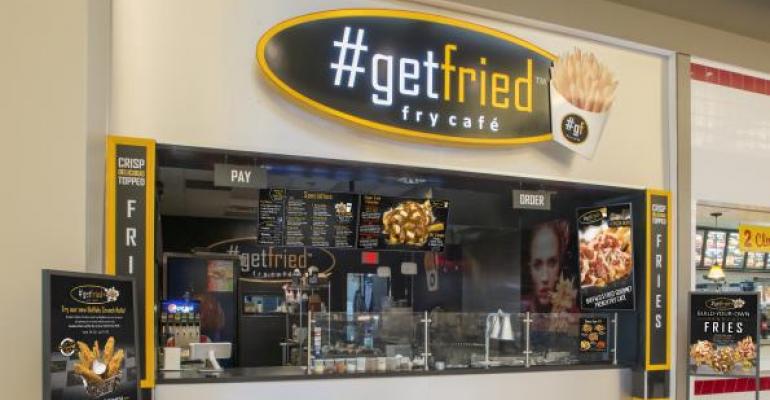 Innovation is built into every aspect of #getfried Fry Café — even the fast-casual concept's use of a hashtag in its name.

“We found out very quickly that this is the model for success,” said #getfried co-founder Chris Covelli. “We think the hashtag is a part of that success.”

The idea to use a hashtag in the brand name came out of a brainstorming session, says Covelli. It was designed to speak directly to young people — the chain’s target audience — in their language and inspire them to take to social media.

“Including that hashtag certainly innovated the brand,” says Covelli. “No one else is using hashtag in their brand name.”

Founded in early 2015 by Covelli and his partner Garrett Green, #getfried Fry Café is built around a menu of craveable, customizable, made-to-order French fries. There are currently two company-owned stores — one in Walden Galleria Mall in Cheektowaga, N.Y., and the other in the Fashion Outlets in Niagara Falls, N.Y., as well as a roaming food truck.

In addition, earlier this year the chain began actively selling franchises and already has one franchisee in San Antonio with a #getfried food truck that will soon open a brick-and-mortar location. By the end of the year the company plans to sign five to eight franchise deals and achieve 24 units in 2017.

When it comes to its menu, Covelli says: “It’s all about innovation.” Though just under 2-years old, the brand already has reinvented its menu several times, making it more streamlined for customers and more operationally efficient. The latest version of the menu launched in October features just three options. First are Specialty Fry Baskets: seven curated baskets that can be customized. They include the signature 716, made with fries topped with shredded chicken, buffalo sauce and blue cheese; Texas Cheese Fries, made with fries drizzled with cheese and topped with savory bacon, chive and chili powder; and Oh Canada (Poutine), made with fries covered in savory gravy and cheese curds.

Next, there are the Finger Food Favorites, including Original Pizza Logs, Buffalo Crunch Rolls; and Crispy Chicken Fingers. Finally, the newest menu addition is the Dutch-style French fries with a choice of six different fry styles and 19 different sauces — from “classic original dipping sauces to some new-age original sauces,” Covelli says. They are served in paper cones that was inspired by the fries that he ate during his travels abroad.

“We have to keep introducing new ideas to see what everyone likes,” says Covelli. “I’m very confident in the new menu.”

This three-pronged menu is an evolution of the chain’s original menu, which offered only the specialty fry baskets and an option for customers to completely customize a basket choosing one of six different fry styles and then adding any number of toppings.

“We’re bracing ourselves for exponential growth,” says Covelli. “So we want to simplify for our franchisees.”

While many of the concept’s innovations originate from Covelli and Green and their internal brainstorming sessions, others have come from what some may think is a less likely source — its foodservice suppliers.

“A lot of times we get great assistance from foodservice providers,” says Covelli. “It’s between brainstorming and supplier relationships.”

For example, the new funnel fries — pastry dough in French fry form topped with powdered sugar and featured on the Dutch-style section of the menu — were inspired by a call from a vendor, the J&J Snack Foods Corp.

Additionally, Covelli says the idea to add 19 different sauce choices for the Dutch-style fries was inspired by a brochure from a sauce vendor with which the chain is now partnering to provide some of the options.

#getfried continues to innovate not only on its menu, but also with technology. On Nov. 1, the chain will launch a new rewards app in partnership with a company that helps to better connect businesses to customers through technology. The app asks customers to answer a dozen questions about their recent order and in return offers them rewards, such as a complimentary drink or a discount on their next order. Covelli is hoping the app will steer customers ways from restaurant review sites such as Yelp, and provide valuable insights to enhance customers’ future experiences.