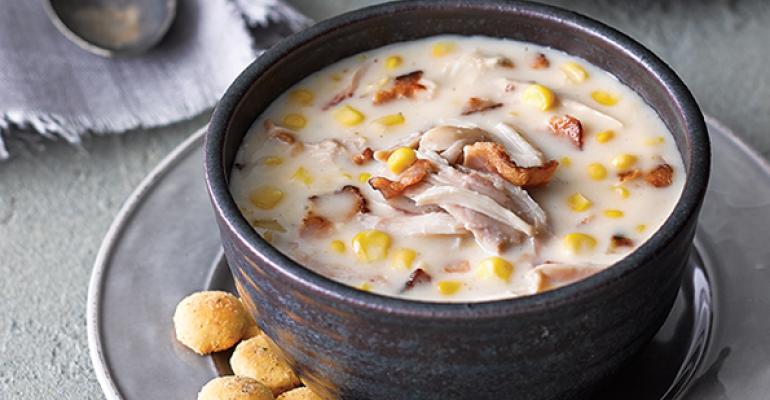 Diners often tend to play it safe when ordering familiar menu items rather than unusual options. But when customers do step outside of their culinary comfort zone, they often are drawn to dishes that are recognizable yet offer something that is exciting and different, too.

Contemporary riffs on traditional dishes — whether it's a soup, salad, appetizer, entrée or dessert —  tend to sell well at all types of restaurants, says Thomas Dritsas, vice president and corporate executive at Del Frisco’s Restaurant Group in Southlake, Texas. It’s a continuation of how people broaden their palates.

However, soups in particular lend themselves to customization as the creative addition or subtraction of an ingredient or two can easily turn a conventional preparation into a top-selling signature dish — helping a restaurant establish its identity and generate traffic.

Olive Garden, the Italian casual dining chain based in Orlando, Fla., menus its own regionally inflected version of onion soup, which includes three types of onions — pearl, red and Vidalia — simmered in chicken stock with red pepper flakes and parsley. The soup is finished with angel hair pasta and Romano cheese.

The 834-unit Olive Garden, which is owned by Darden Restaurants, also offers a tomato-based soup variation with its Cream of Tomato and Basil Soup. The dish calls for diced tomatoes, white wine, onions and heavy cream to be reduced on the stove and then pureed in a food processor with fresh basil. It is garnished with more basil and tomatoes.

Those dishes that bring you back and jog your food memory make you feel good generate that memory recall that makes the guest think, ‘Hello, I know you.’
Thomas Dritsas, vice president and corporate executive, Del Frisco’s Restaurant Group

Chefs at San Francisco Soup Co., combine French and Italian traditions in the Chicken Asparagus soup with white beans, ham and oyster mushrooms. Chicken stock is thickened lightly with a blonde roux, while the soup gets some healthful heft from hand-pulled chunks of chicken and fresh asparagus.

Working the solids-converted-to-liquids theme with equal vigor is the Green Pig Pub in Salt Lake City, where the Reuben, a bread-buttressed sandwich standard, is turned into soup beginning with corned beef and sauerkraut added to beer, heavy cream and potatoes.

Chef Jasper White, owner of the four-unit Summer Shack concept in the Northeast, is well-known for his version of the iconic creamy seafood soup, New England clam chowder, which he calls “a meal in itself.”

White says that while some recipes call for bacon he prefers to use salt pork instead  because he believes it has a “cleaner” flavor. His recipe also calls for heavy cream, clam broth, fresh quahogs, cherrystone clams, diced Yukon Gold potatoes, onions, celery, garlic, thyme, black pepper and chives. After the chunky chowder is done cooking, White recommends letting it sit for 45 minutes, which allows the flavors to come together. He serves chowder with common or oyster crackers.

Another example of how a minor twist can alter the personality of a dish is Quaker Steak & Lube's Hot Chassis Chili. The 60-unit casual dining operation replaces the beef with smoky bratwurst and adds other textural flourishes with cheddar Jack cheese, jalapeño and crisp tortilla strips.

The successful adaptation of a traditional dish often can rely on a customer's personal experience. As people age, Dritsas observes, they assign good or bad feelings to food experiences and establish their own ideas of comfort food. Chefs whose food helps diners relive those positive memories see modernized items take off, he says.

“Those dishes that bring you back and jog your food memory make you feel good,” says Dritsas, whose company includes Del Frisco’s Double Eagle Steakhouse, Sullivan’s Steakhouse and Del Frisco’s Grille. Classic dishes and ingredients “generate that memory recall that makes the guest think, ‘Hello, I know you.’”

“Things like chipotle mac-and-cheese and truffle mac-and-cheese are also good examples because they show chefs focusing on the main elements of the dish that made it successful,” Dritsas says. “We pay homage to those dishes by not trying to recreate what already made it familiar. Then we look for a way to add something new.”

Stan Frankenthaler’s team at CraftWorks Breweries and restaurants also customized the meatloaf at its Gordon Biersch chain by using ground turkey and creating a beer-accented mushroom gravy. The key to modernizing classics, he says, is to create a unique proposition.

“We asked ourselves, ‘How do you make meatloaf unique?’” Frankenthaler begins. He says relying on ground turkey’s lower-fat, lower-calorie benefits creates a health halo and that adding the wild mushroom and beer gravy “makes it a specialty item you can’t get anywhere else. But you still have the basic meatloaf attributes there that make guests say, ‘Oh, that’s familiar, but still unique.’”

He also cites the chain’s artisan grilled cheese with Gruyère, smokehouse bacon and avocado mayo on sourdough bread as “a standard just waiting to be reinvented. It’s not the American cheese we grew up eating; it’s got all these new things going on that are punctuations of flavor. You’re taking something we all liked as kids and making it adult.”

Add a little romance for an appetizing appeal
Oct 22, 2014