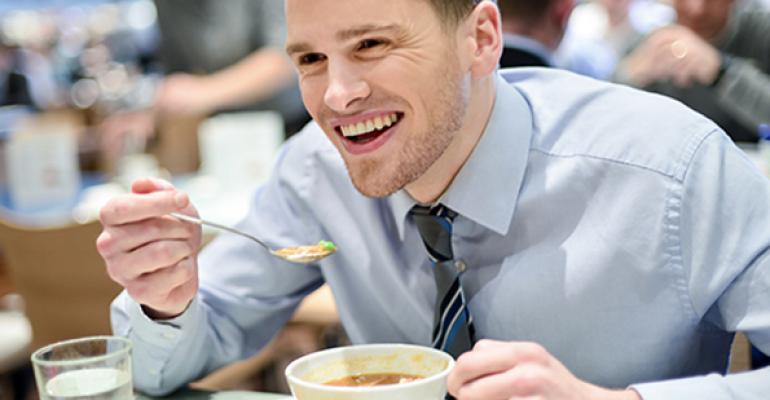 While growth among chains specializing in soup has remained modest in recent years, the sector holds opportunities for operators who can lure the many soup-eating Americans from their home kitchens with the right concept — particularly one that also menus freshly made salads or sandwiches.

The goal of attracting soup fans should not be unachievable for restaurateurs, either, given that soup already tends to be in sync with such industry mega-trends as offering healthful alternatives, featuring craveable foods with more robust flavors, and emphasizing fresh ingredients.

“We love soup,” says Harry Balzer, vice president of the NPD Group, a consumer marketing research firm based in Port Washington, N.Y. “But most [soup consumption] occurs inside the house. Soup as a category is a very important part of the American diet, and if [operators] can convince Americans that they can deliver a good product, there is great possibility [for growth].”

Soup consumption in the home has grown steadily over the past three decades, NPD research finds. Twelve percent of the American population consumed ready-to-serve soup at least once in a two-week period in the home in 1984, NPD says, adding that figure rose to 15 percent in 1994 and 18 percent in 2004. By 2014 it had risen to 25 percent of American consumers.

By comparison, soup consumption in restaurants has not shown itself to be as robust, NPD says, noting that only 4 percent of all lunches and suppers bought at restaurants in 2014 included soup.

Clearly, there is opportunity for soup specialists who can convince Americans to shift their allegiances away from the home stove and into the restaurant. Just last month, Dallas-based Brix Holdings LLC, parent of the Red Mango frozen yogurt chain, acquired the 37-unit Souper Salad buffet operator as well as Greenz salad chain with an eye toward growing both concepts.

In announcing the acquisition, Brix chief executive Joe Vitrano said the concepts appeal to diners looking for more healthful options. “These acquisitions are consistent with our focus on healthier menus driving a healthy business opportunity,” he said. “Both brands have the potential to expand in the fast-growing segment of the food industry focused on consumers' healthier eating choices.”

The ability of soup restaurants to menu a wide variety of selections plays into existing trends. According to Technomic, Inc., the Chicago-based research firm, 51 percent of consumers want to try new and unique soups, while 35 percent say they purchase soup because they want to try new varieties.

Soup purveyors, in fact, are in a good position to take advantage of the trend toward variety and robust flavors. “People want to be knocked out,” says Arlene Spiegel, founder of Arlene Spiegel & Associates, a New York-based consulting company. “Millennials in particular are so adventurous. When they go out to eat, they want bold flavors. They won't stand for their fathers' chicken noodle soup.”

To help position themselves to attract more diners looking for bolder flavors and more variety, soup chains are plugging into the trend of offering more ethnic dishes, Spiegel says. “You can get everything at some of these chains,” she says. “You'll find a wide variety of ethnic soups on the menu, like Mexican tortilla, Chinese hot and sour and Mediterranean avgolemono.”

Hale & Hearty is a New York-based concept focused on soup as a driver of its growth. While the 32-unit chain also offers salads and sandwiches, chief executive Andy Taylor says soup accounts for 50 percent to 60 percent of sales. All Hale & Hearty soups are prepared fresh in the company's 20,000-square-foot commissary in Brooklyn, N.Y., which purchases ingredients from as many local sources as possible.

The chain — which is adding five to eight new units a year — offers a half dozen “Everyday Soups” that include such selections as Cream of Tomato with Chicken and Orzo, Tuscan White Bean, Three Lentil Chili and Ten Vegetable soup. In addition to the six core soups, Hale & Hearty also offers up to 18 other varieties on a daily basis. Taylor says the biggest selling category right now is seafood soups — New England clam chowder, in particular — along with Chicken dumpling.

Not surprisingly, Hale & Hearty has gotten hit by “the kale wave,” he says, adding, “Our Portuguese kale soup is a good seller.”

Taylor says the business also is being impacted by the growth in the number of Americans who are careful about what they eat, noting that there has been an uptick in interest in vegan, vegetarian and gluten-free soups. In addition, he says Hale & Hearty's wholesale business caters to upstate New York colleges, where students are demanding to know more about the foods they're eating. “They want to know the provenance — things like where the chicken comes from, is it hormone-free, is it cage-free,” he says.

There is plenty of opportunity for foodservice operators looking to showcase soup as an essential part of their concept. To successfully accomplish that, they must first make certain that their soup offerings meet the same scrutiny the rest of their menu items are subjected to, and that they are craveable, healthful, and innovative. If operators achieve that, though, they will soon find out just how hot soup can be.

Add a little romance for an appetizing appeal
Oct 22, 2014