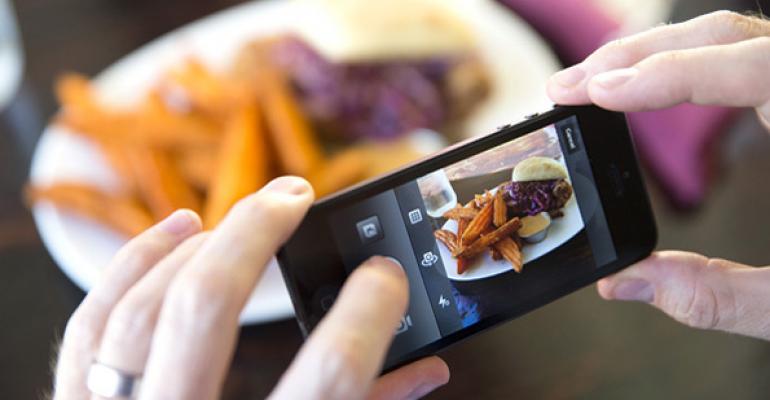 The Wall Street Journal proclaims that “Instagram is #instagood for restaurants,” a viewpoint with which many operators may have come to agree. But a new study published in the Journal of Consumer Psychology argues that while more people may become aware of a restaurant when photos of its food appear on services like Instagram, the very act of viewing those photos can ultimately make the restaurant’s food less appealing to customers.

That’s the conclusion reached by Brigham Young University marketing professors Ryan Elder and Jeff Larson. The duo conducted an experiment in which 232 subjects looked at and rated 60 pictures of either sweet desserts and chocolates or salty snacks such as chips, pretzels and French fries. Both groups then ate salted peanuts. Those who had seen pictures of salty items didn’t enjoy the peanuts as much as the sweets-viewing group, even though they had not looked at any pictures of peanuts, just of other salty foods.

The authors’ conclusion: looking at too many pictures of food makes it less enjoyable to eat. In this case, subjects had become satiated on the specific sensory experience of saltiness.

“In a way, you’re becoming tired of that taste without even eating the food,” says Elder. “It’s sensory boredom—you’ve kind of moved on. You don’t want that taste experience any more.” The authors say following just a few Instagram users who frequently post food photos wouldn’t necessarily trigger this response.

“You do have to look at a decent number of pictures to get these effects,” Elder said. “It’s not like if you look at something two or three times you’ll get that satiated effect.”

However, the authors claim the downside here is real.

“If you want to enjoy your food consumption experience, avoid looking at too many pictures of food,” Larson says. “Even I felt a little sick to my stomach during the study after looking at all the sweet pictures we had.”

So should restaurants be concerned that customers who snap photos of their meals to share via Instagram might actually be suppressing future demand? Or that future customers who come to a restaurant and order dishes they’ve seen on Instagram might wind up enjoying them less because they’re presatiated? Or even that potential customers will experience the “sensory boredom” Elder talks about and simply not go to the restaurant in the first place?

It’s hard to say how this will play out in real-world restaurant settings, so we’ll leave it to future researchers to sort out the cause and effect here. But be aware that the law of unintended consequences may come into play on this particular aspect of your restaurant’s social media presence.

How four chefs leverage the promotional nature of Instagram
Jan 30, 2013