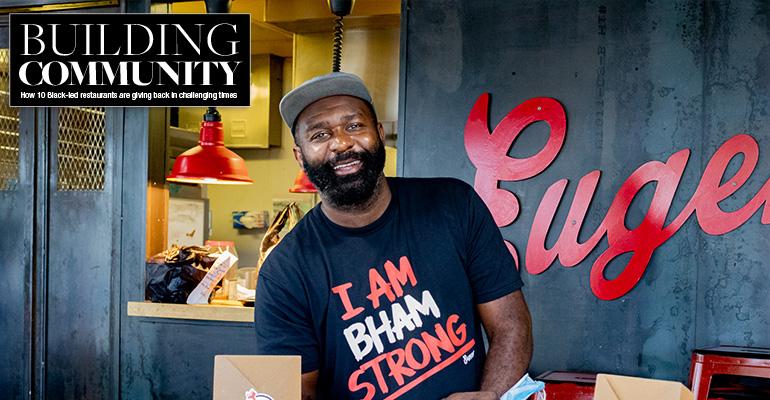 Zebbie Carney of Eugene’s Hot Chicken in Birmingham, Ala. on the explosion of hot chicken and its Birmingham introduction.
People

When the coronavirus pandemic restrictions hit, Eugene’s Hot Chicken — which began as a food truck in 2015 and moved into its brick-and-mortar Birmingham, Ala., location three years ago — pivoted to its roots.

Carney is even mulling the prospects of an expansion, put on hold because of the pandemic, to a second location in suburban Birmingham.

“Our store never closed,” Carney said of the pandemic. “We just had to change our model up a little bit. We went to online ordering, no dine in, catering and delivery service. And we’re utilizing the food truck like crazy.”

Related: Atwater’s Best BBQ and Soul Food in St. Petersburg, Fla., serves as an outlet for the community to feed those in need

Birmingham’s health department allows 50% occupancy, but Carney said Eugene’s is small, occupying just 1,100-square feet. “There’s no reason to try,” he said. “We’re tiny. But our patio is about the same size, so [we] really utilize that.”

Some business has returned to the downtown office-entertainment district in which Eugene’s is located, Carney said, “but we’re not doing great.”

Sandwiched between construction for a sports stadium on one side and interstate expansion on the other, Carney said the COVID-19 pandemic came at an already difficult time.

Carney still holds out hope. “I don’t think we are going to have sports this year,” he acknowledged. “Sales will be flat or may dip a bit, but our food truck is holding strong and we are really going to push the catering.” Catering is done through the food truck as well as an additional trailer.

Carnery, a native of Nashville, Tenn., moved to Birmingham with J. Alexander’s and worked as executive chef with that company for six years. But every time he went home to Nashville, he’d have Prince’s Hot Chicken.

“It was blowing up across the country. Birmingham has an amazing food scene, and I thought it needed hot chicken,” Carney recalled.

Eugene’s menu now features wings, tenders and whole and part birds at prices ranging from $7 to $47. Five spice levels range from no heat (Southern) to Stupid Hot (“for the bold and daring”). A range of sides include fries, slaw as well as Kickin’ Collard Greens, Skillet Beans, parsnips and carrots and baked potato salad. 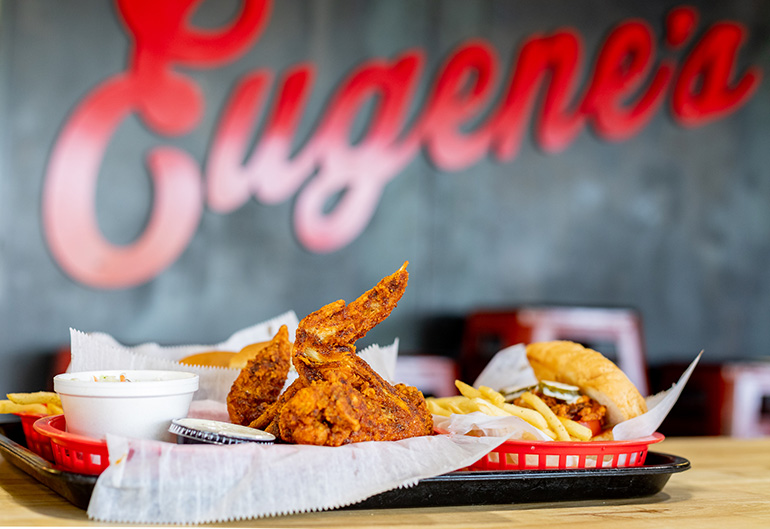 Recognizing a need for hot chicken, Carnery started with pop-up dinners and then bought the food truck. “It’s been a blessing ever since,” he said.

Before the pandemic, Carney’s food truck would do office buildings for lunch and then move to neighborhoods for the dinner daypart.

“Within seven days, we changed our schedule and started doing all neighborhoods,” he said. “Everyone at home.”

Within weeks, Carney said he started to partner with non-profit groups around Birmingham to cater hospitals. The non-profits would raise funds and pay restaurants to provide food at cost for hospital workers at such facilities as CareHealth and BHMCares. “It was a win-win for everybody,” Carney said.

The COVID-19 pandemic did put Carney’s plans for a second brick-and-mortar location on hold. “But I think we are going forward with that,” he said in mid-August.

“We weren’t a dine-in restaurant, so we’ve been able to maintain and sustain through the whole thing,” Carney said.