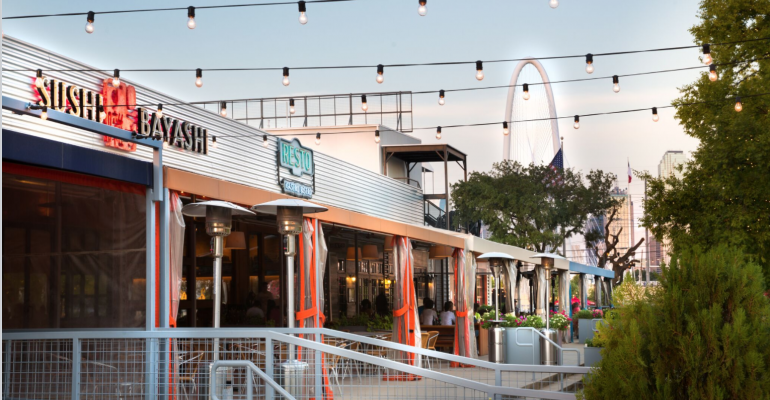 First opened in 2012, Trinity Groves is a 100-acre property with space for 16 restaurants. It was designed by Romano and co-founders Stuart Fitts and Butch McGregor as an incubator that would grow new concepts. The pandemic took a toll on the dining complex, however, and 10 spaces sit empty after restaurants closed there.

Now Rodarte has plans to bring Trinity Groves back to life — and to respark efforts to grow new concepts beyond the Dallas property.

In an interview, Rodarte said Romano is stepping into more of a “mentorship” role to allow the young chef to bring a “Next-Gen Twist” to the restaurants developed under the Trinity Groves banner.

“His words were, ‘You’re the young one who knows what people want,’” said Rodarte of Romano’s decision. But he said Romano is not retiring, he’s just stepping back from day-to-day decisions.

“I don’t know that he’ll ever retire. It’s not in his blood,” Rodarte said.

In a way, the move also keeps leadership of Trinity Groves in the family.

Rodarte is the son of Beto Rodarte, a chef who has worked with Romano for years developing the Mexican concept that became Cozymel’s (later sold to Brinker International). Beto Rodarte later worked for Brinker creating Mexican dishes for Chili’s and On the Border. Romano is the founder of a number of restaurant concepts, including Fuddruckers, EatZi’s and Romano’s Macaroni Grill, and was a joint-venture partner with Brinker.

Julian Rodarte is planning to fill the empty spaces at Trinity Groves, starting with three new restaurants to come this year.

None have a name yet, but the first, scheduled to open in May, will fill two combined spaces within the property to become a 5,000-square-foot restaurant that will seat about 300. The theme will be “Americana” with a Dallas focus, Julian Rodarte said.

The other two concepts to come — scheduled to open in August and September, respectively — will be more quick-service or limited service, he said.

Then the next phase will be to look at building restaurants off property, including replicating Trinity Groves in other locations to build mini dining hotspots. Last year, a smaller version of Trinity Groves opened in the Dallas-Fort Worth airport, for example, with outlets from five concepts.

But for Julian Rodarte, who officially became CEO in January, the first step was building a corporate infrastructure to support that growth, which led to the creation of Trinity Groves Restaurant Group.

A graduate of the Culinary Institute of America who grew up working in his father’s restaurants, Julian Rodarte has accumulated years of experience both with independent and chain concepts. At age 14, he started working at a taqueria his father opened.

“He tried to discourage me, saying he worked in restaurants so I didn’t have to,” the younger Rodarte said. “He put me in the dish pit to discourage me. But it didn’t work.”

As a student, he interned with renowned chef Dean Fearing and worked at the Ritz-Carlton in Dallas. He later was hired as a corporate chef for Denny’s, and he served as a culinologist with CTI Foods, where he developed menu items for other chains, including Wendy’s, Burger King, Pei Wei and PF Chang’s. As a consultant, he has helped to revamp menus at Trudy’s Tex-Mex and South Congress Café in Austin, Texas.

Julian Rodarte said he has been able to learn from longtime operators, like Denny’s CEO John Miller (who worked with Beto Rodarte at Brinker previously), Brinker CEO Doug Brooks and Romano, who helped Rodarte open his first restaurant at age 23.

“I got to watch amazing leadership, with individuals like John Miller and Doug Brooks and Phil. I got to see who those individuals are in their everyday lives and in their offices at their desks,” he said. “And I was able to learn about structures and the scaling that a restaurant or business needs in order to make money. If you truly want to make money (in restaurants), it truly has to be scalable.”