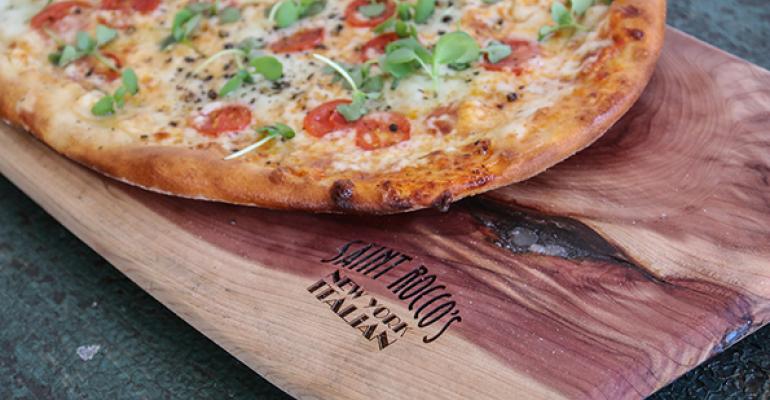 Chef Jay Valley for years headed the EatZie’s Market and Bakery chain, the concept by veteran restaurateur Phil Romano. Then Valley joined Romano’s team at Trinity Groves in Dallas, a unique dining hub that also serves as a restaurant concept incubator, giving birth to a number of brands.Now it’s Valley’s turn to step to the plate.

Valley is chef and co-owner of Saint Rocco’s New York Italian, a polished casual concept scheduled to debut in Trinity Groves this month.

It will be the 12th restaurant concept within the 15-acre complex, and, like the others, it’s a partnership with Romano and other investors.

For Valley, the vision was to bring authentic New York-style Italian fare to Dallas, where red sauce concepts tend to be represented by chains. He, Romano and the restaurant’s g.m. Patrick Mailley grew up in the Northeast, where Italian food was a way of life.

The menu will include dishes more out of an Italian grandmother’s playbook, like a Sicilian lasagna. Instead of stacking noodles with filling, this version starts with ricotta at the bottom, topped with lasagna noodles tossed with bolognese sauce and sausage, with fresh mozzarella over all, Valley says.

Other signature dishes will include pork shoulder slow-roasted and served in a bowl au jus with white beans and spinach. On the lighter side, sole Milanese will be served with arugula and San Marzano tomato salad.

Portions will be generous and shareable, said Valley. Entrees will be priced between $25 and $35, though a 20-ounce porterhouse will be in the $40 range.

The 150-seat restaurant has a full bar and guests sitting at the 24-stool bar can watch the action in the kitchen. The walls will be covered with black-and-white photos of the family members of owners, investors and staff.

Valley is also talking about innovations on the labor side, as the restaurant recruits workers. The team is looking for ways to reward performance for both the front- and back-of-the-house, with benefits like tuition assistance or bonuses.

“We want to do something the whole staff can participate in,” Valley notes. “Once we have the staff lined up, we’re going to put it to them to see what excites them most.”

Saint Rocco’s will eventually have three floors. A second floor, to open later, will include a wedding and banquet hall. On the roof will be a bar with a full view of Dallas.

Trinity Groves is also an entertainment venue, with galleries and shops. The restaurant brands that have launched there so far include Amberjax Fish Market Grille, Babb Bros. BBQ & Blues, Casa Rubia and Chino Chinatown.

Later this year, the development will also include a residential component.

Romano, who is known for creating brands such as Fuddruckers, Romano’s Macaroni Grill and Cozymel’s, along with investors has about 75 acres overall to grow the project, with potential for more.