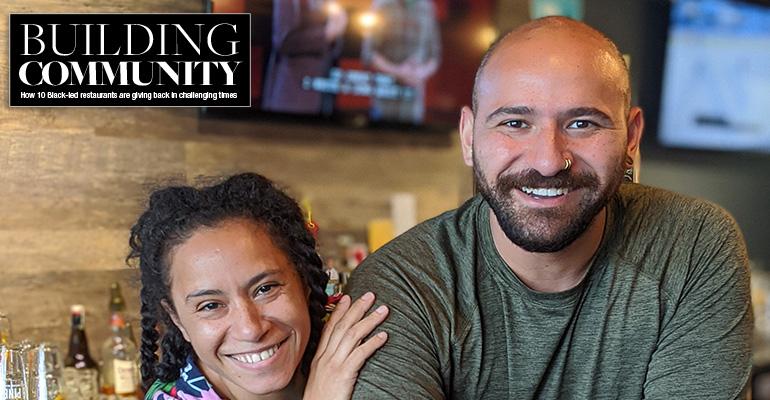 The Hop Knot franchise location in Manchester, N.H. is owned by a mixed-race family and prides itself on community involvement

In New Hampshire — among the states with the largest (non-Hispanic) white population, according to the U.S. Census — the sight of a restaurant with a rainbow-hued black power fist logo painted on its window might give passersby pause. But Hop Knot in Manchester, N.H. is a Black-owned, franchised craft beer and pretzel bar that aims to be a safe space for all.

“Manchester, New Hampshire is a very white, older community where everyone is 40-50 years old and white here,” said Kenny Frasch, who co-owns Hop Knot with his family.  “And then you have my family: We’re immigrants, we’re black, we have accents.”

The Frasches — a mixed-race family of multiple ethnicities and sexual orientations — took over Hop Knot in September 2019 after the previous franchisee had closed the restaurant due to poor performance. Kenny Frasch’s parents Joppa and Zoltan Frasch own the restaurant and take care of back of the house duties, while he and his sister Trudey Frasch run the front-of-the-house operations.

Since last fall, the Frasches have transformed their 55-seat Hop Knot location into a community-centric space that welcomes customers of all races, ethnicities, gender identities and sexual orientations to confidently and unabashedly be themselves while sipping on a pint of local craft beer or tasting a cheesy stuffed pretzel for an average check of $15 per person. 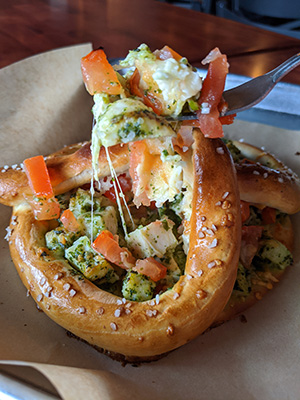 “When you walk into places around here you can feel stares because you don’t fit the quota or mold of what a typical customer is,” Kenny Frasch said. “But there’s a seat for everybody at our tables. We’re providing a place where people can feel comfortable in their own skin and just have a drink or some food.”

The restaurant and craft beer bar really began leaning into its Black culture and background in the wake of the George Floyd killing and resurgence of the Black Lives Matter protests around the country.

In June, when Kenny Frasch was already working on Pride month-related events, they hosted Manchester’s first-ever Juneteenth celebration in partnership with other local business owners and the local YWCA. The event featured prominent Black speakers, music and local artwork.

At the event, Manchester Mayor Joyce Craig spoke to Black protestors and officially declared June 19 as Juneteenth Day. The celebration was much more popular than he realized it would be, with over 100 community members showing up to support the event, Kenny Frasch said.

“People were coming in from our outside entrance and were lined up along the wall of restaurant and out the door just to come in and get a beer,” he said.

Seeing his restaurant at the epicenter of a Black cultural milestone in the predominantly white community where he grew up was personally impactful. Having a white Hungarian father and a Black mother, Frasch has embraced his identity as a Black man, even though he realizes that “looking” or “passing” as white comes with its own set of complications.

“People don’t ever think I am Black when they meet me,” he said. “On a personal basis, I have not [experienced racism]. It’s white privilege that I have, even though I identify as Black a lot of the time.”

Kenny Frasch added that even though New Hampshire is “quieter” than other areas of the country when it comes to racial tensions, he understands how important it is to have a place in the community for people who don’t feel like they otherwise belong.

“The important thing is to start the conversation,” Kenny Frasch said. “[Black Lives Matter] is a global movement right now but it needs to come back to your own neighborhood.”