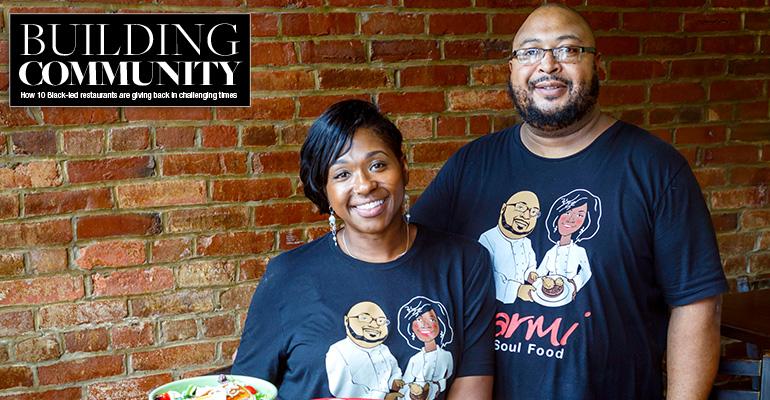 Carleen King, owner of Carmi Soul Food in Pittsburgh, on how the city showed up for the restaurant during the coronavirus pandemic.
People

Pittsburgh rallies behind restaurant serving ‘food of our culture’

If you’re wondering if campaigns to support Black-owned businesses make a difference, Carleen King will tell you that they do.

“We got crushed,” said the owner of Carmi Soul Food in Pittsburgh — crushed in a good way, when crowds of customers are clamoring to give you their money.

“It was amazing. It was wonderful. We were understaffed,” she said with a laugh. “Pittsburgh really showed up for us.”

That was at the end of May, the week after George Floyd was murdered by police in Minneapolis, sparking demonstrations across the country and a drive to support those who have often been left out of the economy.

“Emotionally and personally, it has affected me, my family, my staff and my business tremendously,” she said of Floyd’s murder and the subsequent social movement.

But, if there’s a silver lining, for four days, takeout business boomed at Carmi, and then they got another boost on July 7, which was declared Blackout Day in support of Black-owned businesses.

“The proceeds from those two pushes have been so important to help us stay afloat,” King said.

Like most restaurants across the country, Carmi Soul Food was crushed in a bad way by the restrictions put in place in the face of the novel coronavirus pandemic. Running the restaurant with no bar seating and a capacity of 25% just wasn’t feasible.

“It makes it not hard; it makes it impossible,” she said.

Shifting to takeout only “is slowing the bleeding,” she said. “But it’s not an end-point.”

“I don’t like it — it’s killing our business — but I don’t disagree. It’s necessary,” she said. “I would rather lose my entire business than one person that works for me.”

Carmi Soul Food opened in 2011 sort of by happenstance.

Carleen King had been working in communications before she married her husband, Michael King, who had been cooking in foodservice since he was 16, including in his family’s barbecue joint, Chicken & Rib King.

Carleen King didn’t have a restaurant background, but she’d been cooking since she was a little girl on Pittsburgh’s North Side.

“Both of my grandparents were domestic workers, so they had been catering without a title forever for their employers,” she said. “So I learned to cook that way, because whenever there was a large event that my grandmother had to do she would do a lot of items at the house. And I spent a lot of time at her house.”

She would peel boiled potatoes with a butter knife, and hard-boiled eggs which she’d chopped with the same butter knife, since she was five years old. She would also pick peas out of their pods and wipe down greens.

“At that time you’d do it with a rag — each and every leaf.” 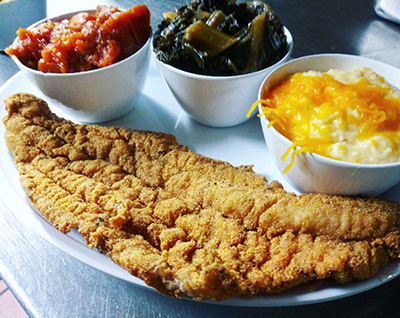 She and Michael started cooking for their church, which then became a full-fledged catering business that outgrew both their home kitchen and the church’s kitchen. As they searched for a new space they convinced a bar owner who had a derelict restaurant next door to rent that space to them by promising to pay a year’s worth of rent in advance.

As they cleaned up the space, they realized that it had a nice dining room, “more than the shambles that we were looking at when we started,” she said. “My husband just talked me into giving it a try as a restaurant.”

That was 2011. Since then they’ve bought their own property in a high-traffic part of Pittsburgh’s South Side, and moved to that location, serving what Carleen King calls “the food of our culture.” That includes chicken and waffles, candied yams, shrimp and grits, stuffed pork chops, fried catfish and their own take on greens, which are a combination of collards, kale and cabbage simmered with smoked turkey. Entrées are around $14-$20.

At the beginning of 2020, “We were right on task,” King said. “Business was great and it was growing and we were on our way to our best year yet.”

That, of course, hasn’t happened. But in April they did open a satellite, takeout location across from Allegheny General Hospital serving food prepared at their South Side restaurant. That had been in the works since November, and the Kings planned to serve patients, hospital workers and people visiting patients.

It turns out that hospital workers were being given free meals as the community moved to support them, visitors weren’t allowed in the hospital and patients were being treated via telemedicine.

“So a huge part of what we anticipated to be our customer base doesn’t exist,” Carleen King said. Nonetheless, she said the spot is “self-sufficient.”

As the businesses struggle, the Kings continue to give back to the community, particularly to Carleen’s native North Side.

They’re committed to the Westside Mustangs Youth Athletic Association, which organizes team sports and provides mentorship for youth, holding fundraisers for the organization and donating to them.

During the pandemic, trays of Carmi’s beef rigatoni has been distributed to churches, community organizations and first responders.

The restaurant also has a special mission on Thanksgiving to cater lavish dinners for a few families in need, nominated by members of the community.

“For that particular campaign, we try to get people who are too high in income to be eligible for any assistance, because that was me at the beginning of my career,” Carleen King said. “It was my son and me, and I remember my friends who didn’t work were doing so much better than me. I remember being above being eligible to receive any type of assistance in any way — from child care or even food assistance, really struggling extremely hard.”

Carmi continues to support its neighbors and people in need, Carleen King said.

“We just try to do everything we can and not to turn any reasonable offer down,” she said.