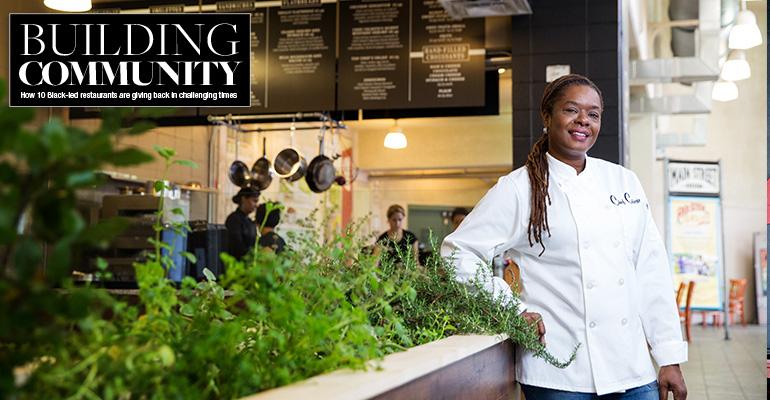 Wilson was known for injecting his catch-phrase guarantee — or gar-on-tee, with his thick Louisiana accent — into his cooking shows, which stuck with Gill, a 20-year restaurant industry veteran who opened the first quick-service Chef Celeste Bistro four years ago in the Red Stick Farmer’s Market in Baton Rouge. A cafeteria version followed at The Spine Hospital of Louisiana at the NeuroMedical Center.

“I ended up here through the military,” said Gill, who received her culinary training in Hawaii. “It was one of the last stations. I’d been in Germany, and I thought I’d like to see what Baton Rouge was like.”

Baton Rouge beckoned, she said, because of her childhood fascination with Wilson on television in Michigan.

“It’s almost a dream come true,” said Gill, who herself makes television appearances and leads cooking demonstrations as a caterer and owner of the two Chef Celeste Bistro locations.

As of early August, coronavirus restrictions were keeping the farmer’s market location at 20% capacity, she said, but the hospital outlet has remained open during the pandemic.

“We feed the patients,” Gill said, “so that’s been a very helpful mainstay for us.”

Best-sellers on the menu are the Reuben sandwich and Downtown Chicken Salad on weekdays. On weekends, when breakfast is served all day, shrimp and grits and blackened-shrimp Eggs Benedict are popular. The average per person check is targeted $10-$12 at the farmer’s market location and $7 to $7.50 at the hospital location.

“We try to stay very reasonable,” the chef said.

In the past 20 years, Gill said, the biggest change has been a move from cash to plastic payments and toward more healthful fare.

“The majority of my food is farm fresh,” she said. “But during COVID, I’ve been seeing more people learning how to cook and cooking at home.”

The hospital location has suffered from limitations or bans on guests being allowed into the facility because of coronavirus rules. The farmer’s market location was closed for six weeks, but Chef Celeste Bistro stayed open.

“We were open for two reasons: One for people to come in if they wanted to and, two, my staff needed the paycheck,” Gill said. Family packaged meals became part of the offering.

About half of the business prior to the pandemic declaration has returned, she said. “We just have to reinvent what we are doing,” Gill said. “There’s no insurance people will be coming back, given COVID.”

Gill has started selling cooking products, such as Louisiana Honey Mustard and spice blends, are available on her website.

Baton Rouge has seen some demonstrations this summer related to George Floyd’s death, she said.

“They staged some awesome, non-violent protests,” Gill said. “It has helped to get the word out about some of the social injustices we’ve had.

“For me, I’m out in the community on a regular basis, and see my role as keeping their bodies nourished with healthier food and making small changes,” she said. “We have some awesome young people out here picking that up. I’m more behind the scenes, but I’ll feed you all day long.”

Gill said she has seen movement toward more inclusion in Baton Rouge. “I’ve started getting more calls for catering jobs,” she added. “I’ve been here 20 years, I’ve run into plenty of instances of prejudice: Contractors wouldn’t do my work; you name it, I’ve seen it. But we’ve grown as a community. We’ve taken steps in the right direction, but there’s still a lot of work to be done.”

For any operator, the biggest challenge for foodservice operators remains uncertainty, Gill said.

“That means we have to on a daily basis reinvent ourselves,” she said. “The rules are changing. It’s fluid.” Even health guidelines from the Centers for Disease Control and Prevention are changing, which flows down to local health departments and makes the restaurateurs’ jobs more difficult.

“You just have to stay on top of it,” she noted. “For myself, I know I keep a smaller inventory than before COVID. That keeps things fresh.”

Suppliers are facing the same problems, Gill added, which means the restaurant operators have to watch the freshness of the supplies they are getting even more closely than usual.

“Even today, I got food that was outdated,” she noted. “I had to send it back. We have to be vigilant and make sure we are not the ones they try to off-load it on.”

The challenging business environment also led Gill to hire her first marketing director, who is tasked with improving social media as well. “Chef Celeste” has appeared in a number of YouTube videos.

And, besides thinking outside the box, Gill said having a positive attitude during the entire pandemic and social unrest helps.

“We need to find what our future looks like,” she said.