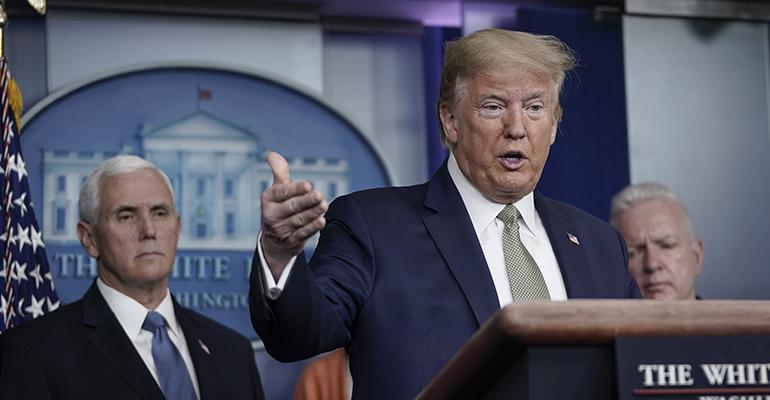 Getty Images
The Trump administration is proposing a stimulus that includes emergency cash for all Americans.
People>Owners

The Trump Administration reportedly unveiled an $850 billion stimulus package on Tuesday that includes sending direct cash payments to help Americans through the expected economic crash as a result of the coronavirus pandemic.

The plan, which was expected to be presented to the Senate later on Tuesday, calls for flooding the economy with an unspecified amount of emergency cash and support for specific industries, like the airline industry. Trump in a press briefing said the plan will give relief to small businesses, but there were no specifics.

While a cash stimulus could benefit restaurants, the foodservice industry — representing more than 15.6 million workers and nearly 10% of the nation’s workforce — faces dire consequences as 19 states at press time ordered dining and drinking spots to close their dining rooms and switch to serving guests by delivery, takeout and drive-thru only to slow the potential spread of the virus.

Even outside those states, many chains and independent operators have voluntarily decided to temporarily close their restaurants entirely or shift to delivery/takeout only, in many cases laying off or furloughing workers.

Trump on Tuesday spoke with executives of some of the nation’s largest restaurant chains, thanking them for pivoting to off-site service to stem the spread of the virus, but the group did not include representatives of independent restaurants. According to the National Restaurant Association (NRA), 90% of the U.S. restaurant industry is made up of small businesses.

Though some states and cities have offered economic relief for small businesses, many prominent restaurateurs and industry groups are pushing for more support, especially as many expect the restaurant and bar restrictions to go on longer than two weeks.

The Small Business Administration said it is working with governors to provide targeted, low-interest loans of up to $2 million to small business impacted by coronavirus through an Economic Injury Disaster Loan Program. The loans are designed to offer assistance after insurance and funding from the Federal Emergency Management Agency, or FEMA.

In Minnesota, for example, the governor on Monday prohibited on-site dining, but also suspended the waiting period and the employer surcharge for unemployment insurance; and said state businesses would be eligible for the SBA disaster program.

Hospitality Minnesota, the state’s restaurant association, is lobbying for more, however, outlining measures echoed in other cities and states. In a statement, the industry group called for the creation of an economic relief fund, deferred sales tax payments and other obligations and extending the deadline for liquor payments.

Elsewhere, members of the restaurant industry rallied for more relief at the local level.

Trump’s plan would join another more than $100 billion plan passed by the House that would provide paid sick leave, unemployment insurance and other benefits for impacted workers.

In a letter to Senate leaders on March 15 related to the House’s Families First Coronavirus Response Act, the NRA urged lawmakers not to put the burden of administration of proposed paid sick leave on employers who are struggling to stay afloat. Under the House bill, employers would cover the cost of paid leave and recover funds later through a tax credit.

The NRA also called for relief efforts like allowing businesses to defer mortgage, lease and loan obligations; tax credits for businesses that are retaining employees; targeted grants for businesses; allowing delays in tax obligations; and expanded access to affordable federal and conventional loans. And the association is also asking for the fix of the Qualified Improvement Property, or QIP, correction so businesses can get back what they overpaid in taxes.

The U.S. Chamber of Commerce, similarly, is also pushing for a cancellation of payroll taxes paid by employers in March, April and May; an expansion and streamlining of loan programs for small businesses (with fewer than 500 employees).

Senate Democrats, meanwhile, are reportedly working on another $750 billion proposal that would expand unemployment insurance and provide loan assistance, among other things.

Treasury Secretary Steve Mnuchin reportedly said he hoped the Senate would pass a stimulus package before the week is out.

TAGS: Back of the House Legal
0 comments
Hide comments
Read This Next

Restaurant traffic is down 48% during coronavirus crisis, according to OpenTable
Mar 17, 2020

Bangladeshi restaurant owner who said ‘let my building burn’ after his restaurant was destroyed in Minneapolis protests is rebuilding stronger
Aug 20, 2020