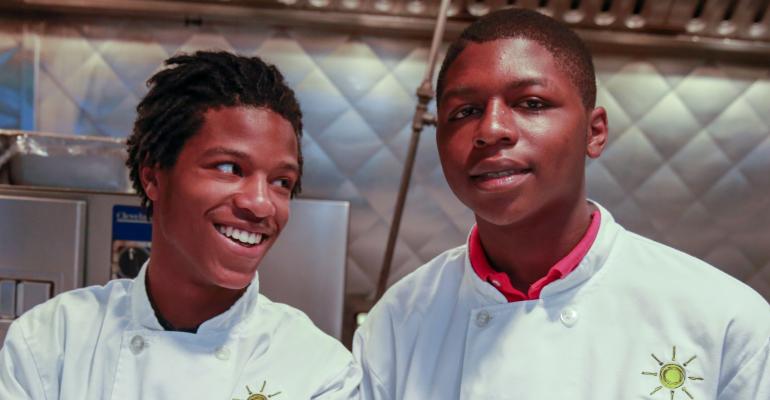 Life has been rough for Mickel Padres, 18, of Dallas. Acting out against it landed him in a juvenile detention facility for his 16th year.

“When I got out, my situation was the same and I was doing worse,” recalls the 19-year-old. “I really did want to change. But, I didn’t know how. I couldn’t do it by myself."

To get help he called Chad Houser. Houser is executive director and chef at Café Momentum in Dallas. The two had met a few years ago when Padres participated in a Café Momentum popup dinner prior to the restaurant’s bricks-and-mortar location opening last year.

“Chad said to call if I ever need a job, so I did,” says Padres. That led to an internship at Café Momentum, a nonprofit restaurant with a cause. There, during the past year, Padres rotated through every station.

He is finishing his time at the café as a server, but cooking is his true love. “It’s hard, but I find it kind of fun,” he says of being on the line. Café Momentum is helping him turn his life around. “They motivated me to keep going to make change and I do my best. I work hard.”

Houser used his connections to help Padres get an interview at a hotel restaurant. “Most likely they’re going to hire me because of my experience,” says Padres.

“I had the opportunity to teach eight young men from a juvenile detention center to make ice cream for a farmers’ market competition,” says Houser.  The troubled teens competed against students from a college culinary program. The public did a blind tasting. The winner received $100.

Houser’s “aha” moment occurred before that. “The first thing that struck me when I met these kids was that I had stereotyped them without having met them.  They were nothing like what I had in my head. Every single one of these kids looked me in the eye and called me ‘sir.’ I’ve been called a lot of things in a lot of kitchens, but never once was I called ‘sir.’”

“When we made ice cream I was so taken by how eager these kids were to learn and how enthusiastic to do something they could be proud of. I realized that for most of these kids this was a first-time feeling. It was the first time they’d had someone pat them on the back and say, ‘Great job, I believe in you, you can do it.’”

“One of my young men won the whole thing,” says Houser. “He told me, ‘Sir, I just love to cook.’ I just love to make food and give it to people and see a smile on their face.’”

“I come from a stereotypical southern family. Every Sunday my entire family would gather at my grandparents’ house for supper. Food always meant more than just eating,” he says. “What that young man said just resonated with me.  He didn’t say he wanted to make money, he said he wanted to make people happy.”

“He was inspired, but I was inspired more,” says Houser.  “I learned pretty quickly that these kids have nothing, no system of support. I remember thinking how mad and how sad it made me.

“Then I realized: You can be mad all day long, but who are you mad at? You have every  ability to help just as much as anyone. The next day I called WHO and said I wanted to do more. I wanted to open a restaurant and let these kids run it.”

Little did he know that impulsive statement would take over his life.

By spring of 2011, he was holding popup dinners to raise money for Cafe Momentum.  Three years of popup dinners—41 total—culminated in 2015 with a bricks-and-mortar restaurant that seats 85. In the new establishment the menu is New American with an entrée range of $18 to $26, and an average check of $47.

“We have worked with 172 kids ages 15 to 19,” says Houser. “Of those kids, statistically speaking, 47 percent would have gone back to jail within 12 months. Only 11 percent of our interns went back.”

“The cost to lock up a teenager for 6-12 months is about $125,000,” explains Houser. “Common sense will tell you that if they go back a second time, it’s pretty much guaranteed they’ll stay involved in the system.”

Interns progress from washing dishes to waiting tables. During that experience, they’re taught life skills like time management, organization, looking someone in the eye during a conversation, disagreeing appropriately and accepting “no” for an answer.

“We take these social skills for granted,” says Houser. “We learn through modeled behavior by people around us. They haven’t had that opportunity. We help them achieve their whole potential. We create an ecosystem that allows them to flourish and go forward in life.”